Sweltering heat did not deter families from activities and games on grounds of Freeman House. 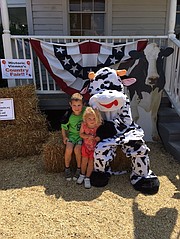 Ethan LaFollette, 5, and his two-year-old sister Lucy, cozied up to the fleece cow who withstood 90-degree heat at the country fair. Although the LaFollettes live in Reston, they love the family events that Vienna brings to the community, said mom Jennifer.

If smiles, wonderment, laughter, photo ops, and crowds are an indication of success, by that standard the debut Historic Vienna, Inc. Freeman House “country fair” on Aug. 20 was a booming celebration of country life.

From the live peppery music of Difficult Run to a farm animal petting pen, from old-time games to fair-food, the four-hour festival of a Norman Rockwell kind of life drew hundreds of families and friends to the lawn of Freeman House.

Leesburg Animal Park brought farm animals (although ball pythons probably are not typical of an American farm), the Sons of the American Legion 180 barbecued hot dogs and hamburgers, American Legion Post 180 sold beer, and a sno-cone truck let children create their own concoction. There were period authors and history talks. Historic Vienna, Inc. operates and administers the Civil War-era Freeman House and hosts free programming throughout the year.