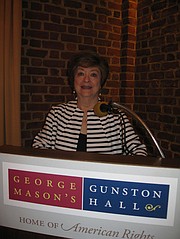 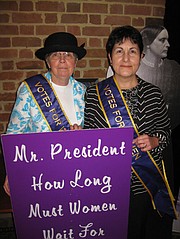 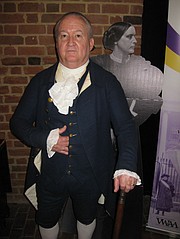 George Mason, a.k.a. Don McAndrews, who has been portraying George Mason at Gunston Hall since 1995.

To celebrate the 96th anniversary of Women's Equality Day on Friday, Aug. 26, which recognizes the ratification of the 19th Amendment to the U.S. Constitution that gave women the right to vote, the League of Women Voters of the Fairfax Area held a Women's Equality Day Lecture at Gunston Hall in Lorton. It was sponsored by the Turning Point Suffragist Memorial Association and Gunston Hall, home of George Mason.

The meeting featured a video documentary on suffragist icon Inez Milholland Boissevain and a talk by historian, Edith Mayo, Curator Emeritus in Political and Women’s History at the Smithsonian’s National Museum of American History. Don McAndrews, speaking in character as George Mason, also addressed the gathering. But the highlight of the meeting was the unveiling of the Turning Point Suffragist Memorial design by architect Robert Beach of Burke that will be built at Occoquan Regional Park.

THE $2 MILLION national memorial will include 19 informational stations that present the history of the suffragist movement. There will be six pillars that discuss activism and democracy; commemorative banners; a rock garden with a bridge; and a memorial cascade wall. The memorial will also feature a garden with native plants and three meditation areas; a rotunda with a sculpture; a plaza; a pond; a rail car; White House entrance plaza gates; plaques of donors; and a seasonal gift shop. Beach said that lots of the details still need to be figured out.

"It's a memorial about a national event recognizing the 19th Amendment to the U.S. Constitution. We're hoping to get it completed by 2020, which is the 100th anniversary of the women's right to vote," said Beach.

"It's recognizing Alice Paul and Lucy Burns and the other suffragists who picketed the Woodrow Wilson White House in 1917 for the women's right to vote. They were arrested and sent to prison -- many to the Lorton Reformatory. There they were treated in harshly inhumane conditions being force fed and beaten; but this tribulation was the turning point in the movement toward ratification of the 19th Amendment. It turned the public's opinion towards ratification," said Beach.

Pat Wirth, Executive Director of the Turning Point Suffrage Memorial, said: "We need to build this memorial. We need to have a place to honor the two million women who worked to get us the vote. It's been critical for women in our country to be able to do this. The mission of our organization is to educate, inspire and empower present and future generations to remain vigilant for future rights."

She added: "We are also intending to put together a Turning Point Institute, with programs for middle and high school youth around the country. The idea is for people who go through our program -- we want to inspire them to become leaders and advocates. We need to make sure our young people don't take this for granted. We want to teach the young people about the importance of voting."

In highlighting one of the pioneers of women's voting rights, Edith Mayo, curator emeritus (retired) in political history at the Smithsonian Institution, told the gathering: "(Inez Milholland) became the icon of the women's suffrage movement because she lead major parades in New York and a huge parade in Washington, D.C., on horseback on the day before Woodrow Wilson was inaugurated. She went on an extended speaking tour of the West because there were a number of states that had granted women the right to vote. So this becomes the first time anyone addressed women voters separately as a group to get them to stand for or against a political principle."

Mayo said Milholland was in poor health and collapsed on stage in October 1916, and thus became a martyr of the suffragist cause. The National Women's Party secured Statuary Hall in the U.S. Capitol building for her memorial service on Christmas day in 1916, which was attended by 10,000 people. Her last words were put on banners and women began picketing the White House, asking President Wilson how long must women wait for liberty. The picketing went on for 17 months and drew public outrage and political attention to the cause. Women's voting rights were finally made part of the U.S. Constitution on Aug. 26, 1920. "That's why we're celebrating Women's Equality Day on Aug. 26," said Mayo.

She said the women's voting movement had been going on since 1848 in a variety of political forms, mostly from lobbying and speeches and trying to get referenda passed in individual states to get women the right to vote.

"But in the final drive, (Milholland) became this icon. You would see her in all the newspapers. She was a perfect spokeswomen -- young, beautiful, articulate, and able to move crowds with her speeches. And then she gave up her life (at the age of 30 from pernicious anemia and other infections including tonsillitis)," said Mayo.

REGARDING WOMEN’S RIGHT TO VOTE, Mayo added: "I think one of the things we're trying to get across is one has to be vigilant about voting rights. The voter suppression of recent years has concerned a lot of Americans. It took such guts and determination for all these groups except for white men to get the right to vote that any slipping backward and trying to suppress the right to vote is a grave concern."

She said you don't find women's voting rights discussed except for a couple of paragraphs in most history books, and that very few people know about how women got the right to vote. "And no one knows that President Wilson had them jailed at Lorton Prison, which is where we're hoping to build our Suffrage Memorial to honor these women who got us the right to vote," she said.