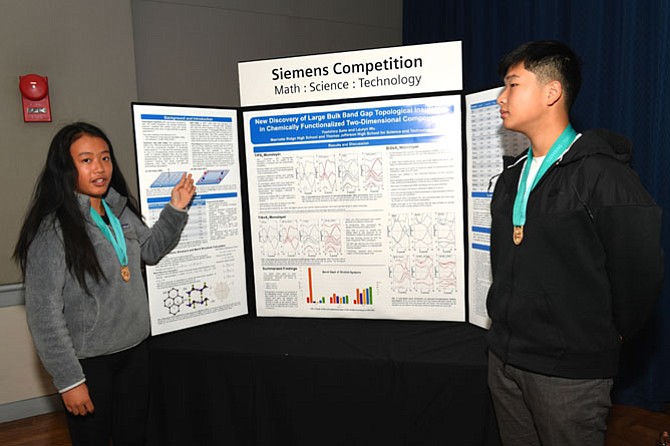 When Lauryn Wu of McLean was in sixth grade, her math club was dominated by boys, but she didn’t let that intimidate her.

“I still went because I thought that math problems were interesting and I was good at math,” she said.

Now that she is in high school, she is one of the best in the nation.

As a 15-year-old sophomore at the Thomas Jefferson High School for Science and Technology in Alexandria, she and her teammate Yoshihiro Saito, sophomore at Marriotts Ridge High School in Marriottsville, Md., were named National Finalists in the Siemens Competition in Math, Science and Technology after earning top spots in the regional competition in November.

All the top regional winners moved to the final phase of the competition to present their work at the National Finals at the George Washington University in Washington, D.C., on Dec. 5-6, where $500,000 in scholarships were awarded, including two top prizes of $100,000.

”Our research is a discovery of a new class of topological insulators,” she said. “Our materials use different atoms than what other research has used before.”

Topological insulators are materials that can conduct electricity on the edge, but insulate in the middle, she says.

The material’s interesting properties have raised a lot of interest in the physics and the material science communities because they have a “huge potential” in high-performance electronics, like quantum computers, according to Wu.

“Quantum computers are the future of computers because they’re like a million times more powerful than today’s supercomputers,” she said.

Currently the only experimental realization of a topological insulator was at 10 degrees Calvin, a very low temperature that can only be achieved in expensive laboratory settings, according to Wu.

What makes Wu and Saito’s work extraordinary is the temperature. They theoretically predict that their material can be used at room temperature, which is significant.

Materials such as the ones they theorize could open a whole new area of application.

“It can be used in real-life application,” she said. “There are no current high-temperature discoveries of topological insulators.”

While Wu and Saito’s project did not win, they were awarded $40,000 scholarships for making it all the way to the National Finals, which were winnowed down from an original pool of more than 2,000 competitors with projects in the areas of computer science, physics, chemistry, mathematics, materials science, environmental science, biochemistry, biology and engineering.

Wu wants to do more research into topological insulators and superconductors, and possibly create materials that can be used in higher temperatures. She also wants to study computer science in college.

For young women who find themselves in a male-dominated STEM field, Wu says not to worry about what other people say.

“Just show that you’re better than them,” she said. “Read books, articles and watch videos about topics that you’re passionate about. Expand your knowledge so you can come up with ideas that are cool and outside of the box.”