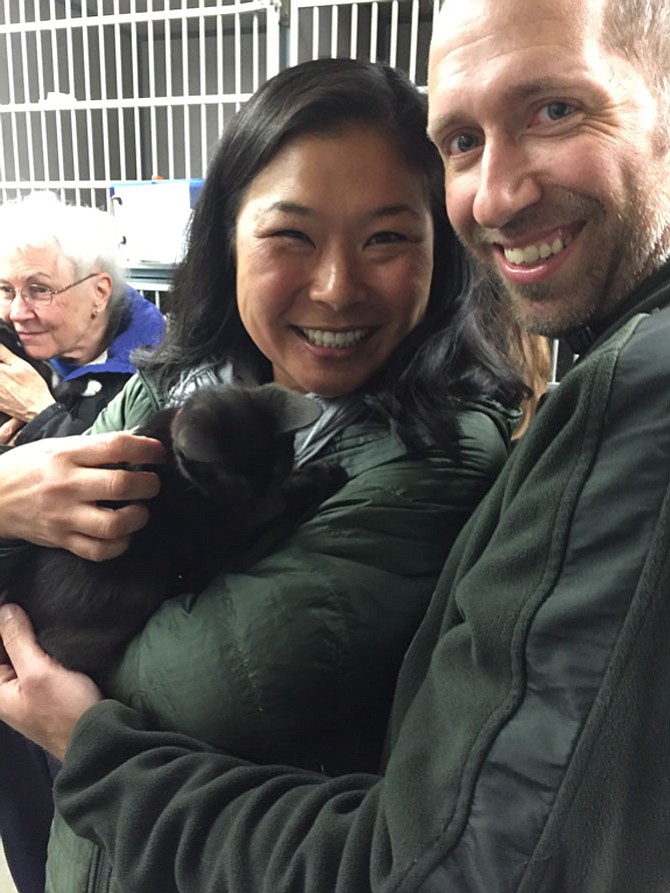 Jo Kang and Joe Swanson with a kitten in need of foster care. Photo by Vernon Miles. 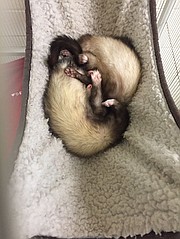 Hendrix and Joplin, two ferrets at the Animal Welfare League of Alexandria. 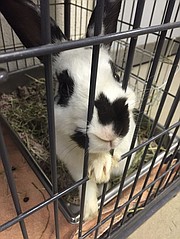 Fluffaluff, a rabbit available for foster care in need of weight gain. 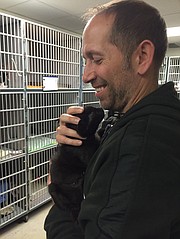 Joe Swanson with a kitten in need of foster care. 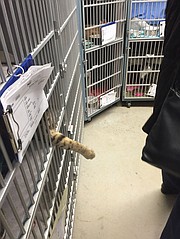 A cat reaches out for an animal foster parent during a tour of the Vola Lawson Animal Shelter.

Tulip is one of the dogs rescued from the Korean meat farm, awaiting a foster home.

Mary Flynn, communications director for the Animal Welfare League of Alexandria, said foster care is still a new concept for shelter work. Foster care allows volunteers to dedicate time and space to individual animals with special needs that the shelter cannot provide. Some issues range from the extreme, as with a dog that struggled to walk due to extensive spinal cord damage, to the more common, a cat who gets lonely in the shelter or a rabbit who needs to gain some weight.

“The ideal is getting as many animals here into homes as we can so they can learn what it’s like to be a dog [or a cat, rabbit, ferret, etc.] and to be socialized,” said Flynn.

While the foster care system has technically been in place at the shelter for a couple of years, Flynn says the shelter is putting it into the forefront with a new foster coordinator: Echo Keif.

Keif helps train new animal foster parents in how to deal with their pets and matches foster parents with an animal from the shelter. Keif said the program is going through changes to be able to provide more support and resources to animal foster parents. The foster program provides all of the food, litter, cages or toys necessary to take care of the animal. If the animal requires medical attention, it can be brought to the shelter’s emergency veterinarian without cost to the foster parent. Pets can generally be kept in foster homes between one to eight weeks. Some pets require around-the-clock attention, like neonatal kittens and puppies, while others can work with a few hours of love each day.

The Animal Welfare League is an open shelter, taking any animal brought to them and taking in animals from other, more crowded shelters. The Alexandria shelter also does not euthanize for space, only in situations with behavioral or medical issues where it would be considered inhumane to keep the animal alive.

Some of the animals have had prior experiences that have left them uncomfortable around people or other animals, but with time and affection most of these animals are able to overcome past trauma.

Jo Kang and Joe Swanson have two cats already but recently signed up for the foster program.

“I used to volunteer with the Animal Welfare League, it’s a great organization,” said Kang. “I really needed a dog fix.”

“We tend to travel a lot,” said Joe Swanson, “But taking care of an animal for a few weeks at a time can work.”

“There’s always a misconception about rescues, that they’re old and used, but they all have such life and such personality,” said Flynn. “Some people say they couldn’t be fosters because they wouldn’t be able to give the animal back up at the end, but it is incredibly satisfying when you finally see that animal you nurtured finally get adopted.”