John Vargas is an Arlington native who went to Wakefield High School before coming to the ACC. From the time he entered middle school, the larger classes made it difficult for him to get the individual attention he needed. He was about to drop out and become a statistic. “I was timid in high school; now I can talk. People in my family are amazed: they say, with pride, ‘What happened to our son?’”

Daniela Landano, from Colombia, said, “At the ACC, other people see your country through you. They often said to me at first: ‘Oh, so you are from Colombia? That is a country that is all drugs and sex.’ I was able to show them my country is so much more than that. My best friend is Bolivian, and before I met her I thought Bolivia was just an uncivilized jungle. So we learn from each other.” 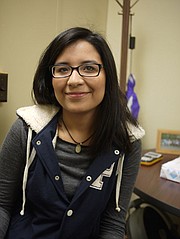 Georgina Rivera, from Bolivia, came to this country when she was 17. She had lived with her grandparents in Boliva from the time she was born.

Carmen is from El Salvador. She is 21 years old. Five years ago, she arrived in the United States because her mother sponsored her to come. She arrived at Wakefield High School, didn’t know much English, and at 18, she found herself pregnant. Why? She was too young, she says, and didn’t understand English well enough to get birth control. She was horrified to be in that situation, and saw her plans to become college-educated disappearing. She was lucky to find a counselor she could talk to at the Arlington Career Center, who explained there were programs like Teen Parenting and the HILT Institute at the Arlington Career Center (ACC). So Carmen, with the encouragement of her boyfriend, went ahead and had her baby — and stayed in high school. She perfected her English and graduated from high school this year, keeping her baby in daycare at the career center where she could see him throughout the day. She met other young mothers.

“The school helped us a lot,” she said. She wants to go to George Mason University where she will major in social work. Her child is bilingual and she is still with her boyfriend, who has supported her in her efforts. She knows without this program, she would have been another casualty of teen pregnancy, a high school drop out.

Principal Margaret Chung is excited to be running a school like ACC, located at 816 S. Walter Reed Drive in Arlington. “Teachers come here because they have a passion for what they do. They believe in kids. Sometimes, they’ve worked in industry and this is the first time they’ve taught. They may have worked with at-risk populations, so they bring all those skills, “ she said.

She points to the accolades on the Arlington Public Schools website Green Scene, which details the Solar Energy Competition her students took part in — and won.

John Vargas says the ACC’s Academic Academy “has been the experience of my life, and that’s not really hyperbole, because ACC saved my life, in a way.”

He graduated this past June, but it was only a few years ago that his life was completely off track. Wakefield was too big for him. Classes had 25 students. He was stressed. His grades were poor. High school felt like a prison. He felt like a failure. He wanted to drop out. The first year he came to the ACC at the suggestion of a Wakefield counselor, it was to try it out. Right away he noticed the classes were only 8-10 students. “That amazed me,” he said. “The teachers paid attention to me, and they seemed less stressed too, managing a smaller class. At ACC it was a lot quieter. You could chat with your counselor and he or she was always right next door. I had a counselor, Ms. LaSalle. She was so happy-go-lucky, so enthusiastic. Her feeling about school made me feel the same way. Teachers would let you ask as many questions as you wanted. Suddenly I was getting A’s and B’s, and I was ‘Student of the Quarter.’”

At the end of the year they asked him if he wanted to stay at ACC. He did. “I found out you can take special courses: digital animation was the first one I took. I learned a lot about ‘illustrator’ and graphic design. You can take a test for free and get certified in Adobe. I wanted to pursue a medical career so I studied medical terminology and animal science. This helped a lot with pharmacology. Wakefield had things after school but I never had time for that: here I can do things during the day and get a license for pharmacology at the end of the year: if you get through the test you can work at CVS or RiteAid. Here you can stack up your specialties,” he said. “Next year I could take another course and build on the classes I’ve taken so far. My goal is to be a pediatrician and major in biology.

“The teachers here are the best I’ve seen in my entire school career,” said Vargas. “Here, the principal is around visiting classrooms every day just to make sure everyone is doing well. Counselors meet with us all the time.”

Nineteen-year-old Georgina Rivera comes from Bolivia and has been in the U.S. for two years. Her mom had been here 15 years and was able to sponsor her. “When I met my mom for the first time, I was 15,” she said. “I remembered nothing about her. I had lived with my grandparents from the time I was a baby.”

Coming here was hard, because she felt like she was leaving her family behind, but “this country gave me a lot of opportunity.” Her mother told her she had to finish high school in the U.S. even though she had already finished in Bolivia. “I was supposed to go to Wakefield but they refused because they told me I was almost 18 — too old. But they said I could go to the Career Center and keep my home school Wakefield.”

Rivera says at first she didn’t like the career center. Now she loves it. “They help you. They believe in you,“ she said. “I take math, English and also technical programs that make a technical career possible for me. I took forensic science from a great teacher. In Bolivia I wanted to be an architect but the English level was too difficult. At the ACC she took cosmetology, but then moved on to more substantive courses: forensic science courses like chemistry, math, and biology. She wants to be a forensic examiner and later take architectural courses. She is a big advocate of the ACC: “you get credit for college, the support is amazing, and anyone coming here will be taken care of.”

Daniela Landano is from Colombia. She’s came to the U.S. two years ago, at 16, to be with her father. She was at Washington & Lee for two years, but then Washington & Lee said she had to go to the ACC because she was too old for high school. She said, “At that moment, I felt really excluded. W&L was beautiful, but the Career Center was not.” Now she realizes this was the best thing that could have happened to her. She has improved her English and opportunities for college. She always compares herself to friends in W&L who were classmates when she left, and she takes pride knowing she has almost a year of college credits.

At the ACC, it is more like a family than a school. There is more access to teachers. “Teachers are trying to learn Spanish as the students are trying to learn English so it’s good to know they are learning too. You really feel behind the native born kids at first. And I was a little shocked that some of the kids in my school had had babies. But I learned to have a lot of respect for girls who decided to have their baby and stay in school.”

“I had to leave my life in Colombia: I’m still divided in a way. Half of me wants to go back, but I know I can always go home. I lost a few uncles and nephews to war in Colombia. It’s more safe here. That was the biggest argument my father made to convince my mom to let me come here. Here I can carry my iPhone — the latest model — around safely. There, they might kill you for a phone. And that’s even though my mom lives in a good part of the city. I am dual enrolled so I take English and TV production, computer programming, pre-calculus, U.S. history. I want to go to NOVA and start there to major in journalism and TV production. “

“I love how international it is here. We have Ethiopians, Mongolians, Moroccans … the academic academy is full of different races and ethnicities. One of the good things is not just that I meet people from South America; it’s very diverse here. There are many students from the Middle East, from Africa. It helps you to have a broader view of the world and breaks down stereotypes.”

“I competed in Skills USA. I just won a competition in broadcast news. They gave us 10 minutes to prepare a program and we have to break it down and choose the most important things to say. The camera operator and I won. My dad gave me bluetooth headphones as a way to recognize my success, “ she said. “We will go to Kentucky to compete nationwide next. It was a lot of pressure, two Latinos and two Americans. I like a challenge. If I didn’t like a challenge I wouldn’t be here. I’d have taken the first plane home.”