The Journey Beyond ‘Three Hots and a Cot’ in Mount Vernon 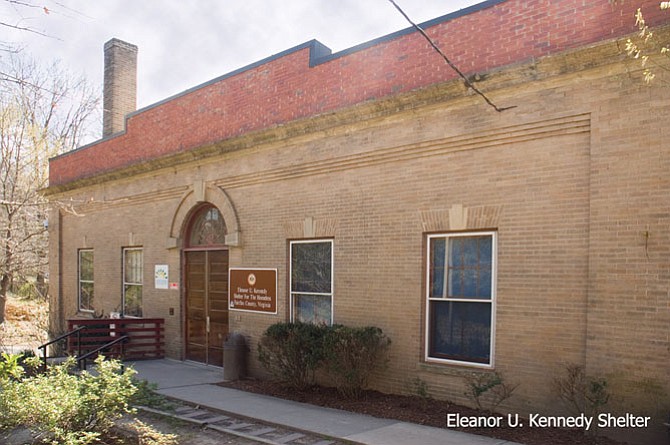 The Kennedy Shelter off Richmond Highway in Mount Vernon is celebrating its 30th anniversary this year. It opened Dec. 14, 1986 as the South County Community Shelter and was renamed for Eleanor U. Kennedy in September 1989. Photo Contributed

The single-story rectangular building housing Kennedy was built in 1918 and served as the Camp A. A. Humphreys Pump Station and Filter Building — water treatment — until 1970 when the treatment equipment was removed and it was effectively abandoned. Photo from 1985.

In late August, Mount Vernon resident “Maria” was released from the Fairfax County Adult Detention Center after being incarcerated for one year. Maria is in her late 20s and asked to remain anonymous. Due to her convictions, she couldn’t go back to live with either her mother or father. After getting out, she first went to live in a motel.

Maria’s probation officer recommended she contact the Eleanor U. Kennedy Shelter for the Homeless on Richmond Highway. On Sept. 13, she got a bed at Kennedy.

“They welcomed me with open arms,” Maria said.

At Kennedy, Maria met with a case manager and employment manager. Within two weeks, she secured a job in the Merrifield area. She takes public transportation for a commute that lasts 45 minutes each way, but she loves having the work.

Now, Maria said she’s been clean of drugs and alcohol for one year and five months, and is pursuing several leads for independent housing. The road hasn’t been easy.

Recently, she said, “I was on the verge of giving up on everything, about to quit.”

But Maria called her mother, who told her she had come too far to do that.

“I shook myself, I didn’t want to relapse, I’ve gotta move on,” she said.

Maria said she has a strong support system, and owes much to the staff at Kennedy, who provide her with dinner and a bag lunch, and a lot of encouragement.

“They’re not here to shut you down and judge you,” Maria said, “but help you get back to the real world. They’re very positive. I see all these people here and I don’t want to let them down.”

The Kennedy Shelter is celebrating its 30th anniversary this year. It opened Dec. 14, 1986 as the South County Community Shelter and was renamed for Eleanor U. Kennedy in September 1989. But the building dates back further than that.

The single-story rectangular building housing Kennedy was built in 1918 and served as the Camp A. A. Humphreys Pump Station and Filter Building — water treatment — until 1970 when the treatment equipment was removed and it was effectively abandoned.

The shelter has been run by the Mount Vernon-based nonprofit New Hope Housing, which staffs it with seven case managers and former shelter director-now director of programs for single adults Tonya Golden.

New Hope Housing executive director Pam Michell said that in the 1970s and ’80s, just getting people safe in a shelter was the priority — to provide them “three hots and a cot.”

Now, Michell said, “the shelter is a tool, we’re more focused on finding housing than ever before. And always the emphasis is on employment.”

To that end, Kennedy has these figures to show since their fiscal year began on July 1:

Overall, Kennedy has housed 84 clients since July, 12 of whom were veterans.

Since the end of November, Kennedy has also been a no turn-away site for Fairfax County’s hypothermia prevention program each night. Do to the already strained size of the shelter, the men must go into a trailer off to the side of the main building and the women sleep on the floor of the dining area.

“There’s not a lot of space here,” Golden said, pointing out what is immediately clear walking through the shelter. Michell described Kennedy as “bursting at the seams.” Not to mention the historic building isn’t Americans with Disabilities Act-compliant and more closely resembles a fallout shelter than emergency housing.

Those seams will eventually get some relief, however, thanks to the Human Services and Community Development bond that was passed by voters in the November election.

The $85 million out of a total $312 million for all the bond questions is dedicated for a couple purposes according to Fairfax County: replacing the Sully Senior Center and building a new Lorton Community Center ($37 million), and to “renovate, expand or replace four emergency shelters for people who are homeless: Patrick Henry, Embry Rucker, Eleanor Kennedy and Bailey’s ($48 million).”

Unfortunately for Kennedy, the historic and environmental significance of the current structure and land upon which it sits make it impossible to either expand or tear down and rebuild on the same property.

Which means Fairfax County needs to find a new location for the shelter. Michell said the search is underway. Finding the right balance, she said, will be difficult.

“What’s important is to be close to public transportation and access to things you need, like the South County Government Center, mental health facilities and shopping centers,” Michell said.

That means not being in the middle of a neighborhood, which also presents problems due to the ever-changing population at Kennedy.

“We do have some clients with numerous barriers: We provide service to sexual offenders, violent offenders,” said Golden. “So we have to consider that in being close to schools, daycares.”

What Michell and Golden are certain of is that the new Kennedy should include a combination of both shelter space and temporary to permanent housing — think efficiencies and one-bedroom apartments — critical for helping individuals transition from shelter life.

Both women said this model has been extremely successful at the Bailey’s Community Shelter in Falls Church and Mondloch Place, which has 20 efficiencies housing 20 chronically homeless single adults who now pay rent and have signed leases.

For now, though, Golden said the clients feel safe at Kennedy.

“We’ve been making it work all these years,” she said. “But I do feel hopeful, we’ll be able to find a property and build on it.”