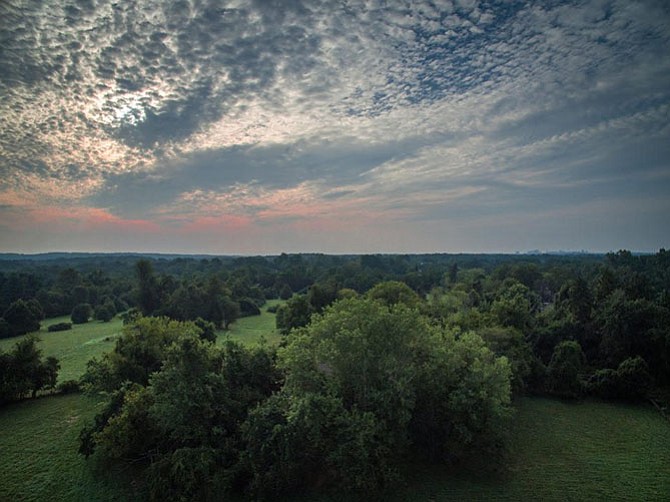 Marmota Farm is a visual anachronism: 22.78 acres of pristine farmland in the center of 21st-century Great Falls. Photo from a drone by John Marciano

Editor’s note: Marmota Farm will be the subject of a town meeting sponsored by the Great Falls Citizens Association at the Great Falls Library at 7:30 pm on Tuesday, Feb. 9. These “FAQs” were summarized by Jack Nutter and the members of Save Marmota Farm.

Georgetown Pike below running from west (left) to east (right).

What is Marmota Farm?

Marmota Farm is a visual anachronism: 22.78 acres of pristine farmland in the center of 21st-century Great Falls with 1,000 feet of frontage on scenic Georgetown Pike. The Great Falls Grange and Schoolhouse, owned by the Fairfax County Park Authority (FCPA), are contiguous properties on Innsbruck Avenue to the west.

According to Fairfax County tax records and local residents, the property was once a dairy farm operated by the Digges family, later subdivided and renamed “Marmota Farm” by local resident Lucy Hanes. The Souhail El-Farouki Trust purchased the land in 1991. Stephen Moriarty of Chadwick Washington in Fairfax is the trustee.

How is Marmota Farm now used?

Unlike most private property on Georgetown Pike, the former Digges Farm has been spared from development for residential use. A 2,142 square foot dairy barn dating to 1925 is intact. It has no public access, but the owner permits community use for a 5K run on July 4. Horses from Lift Me Up, a therapeutic riding service that borders Marmota to the east, have grazing privileges on Marmota’s well-established pastures. The property is zoned RE -- residential estate -- with a minimum lot size of two acres. Fairfax County’s comprehensive plan identifies the property as potential parkland.

What is the status of Marmota Farm?

Bruce Winston of Fraser Forbes of McLean lists the 23-acre Marmota parcel for sale at a reported asking price of $16.5 million. Fairfax County’s assessment, based on present use, is $3.48 million. A subdivision plat for 11 houses on 2-acre lots with an entrance from Georgetown Pike has preliminary approval from Fairfax County and can proceed with Fairfax County’s administrative approval. No public hearing is required for “by right” use.

What is Save Marmota Farm?

Save Marmota Farm (SMF) formed last summer to investigate a proposal that Marmota Farm be purchased with funds from a 2016 park bond referendum that will go before voters in November. Since its organizational meeting, the group of about 25 has reached out to Marmota Farm neighbors, community groups, elected and appointed government officials, conservation trusts and funding experts, preservation activists, and the owner, trustee, and agent of Marmota Farm.

What does SMF want?

The focus is to preserve Marmota Farm as “natural open space for public benefit.” SMF does not envision athletic fields, lights, or construction that would change the farm’s “view shed” or require operational funding from Fairfax County. People, families, pets, joggers, and gardeners could benefit from a park with no adverse environmental impact and minimal maintenance costs.

What is the plan?

Marmota is integral to the “semi-rural” identity of Great Falls as one of the most unusual residential communities in the Washington D.C. region. SMF seeks a path to creatively finance the purchase of Marmota “for public benefit” without diminishing the benefits of sale that accrue to the present owner. Suggested options such as donations to buy the property, conservation easements or trusts, and foundation support begin with a commitment from county government to preserve the property, possibly starting with funds from the 2016 park bond referendum. At present, only $10 million of the total $87 million in proposed bond revenue is earmarked for land acquisition in the whole county, but that proportion could change.

What guarantees Marmota will remain as open space?

There are no assurances, but it is important to communicate community values to local, stat, and federal elected officials.

What happens if Marmota Farm is developed?

Density and traffic would increase on Georgetown Pike and the rural “view shed” in the heart of Great Falls would be lost. With its quiet representation of our agrarian heritage, Marmota Farm has for decades identified “semi-rural” Great Falls. Its preservation requires urgent community action -- now.