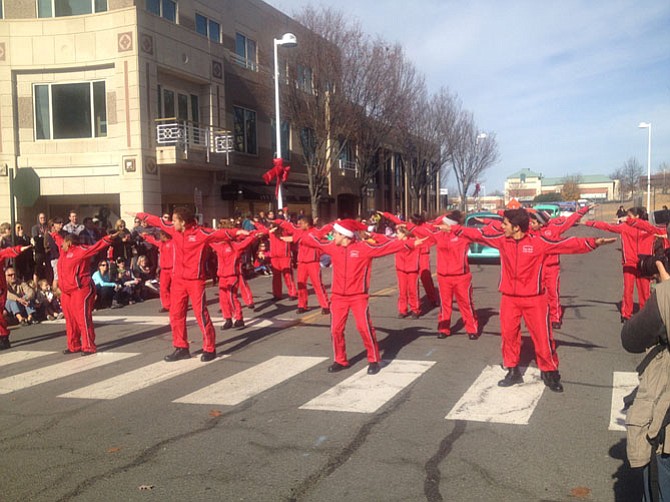 2015-2016 Herndon High STEP team. In March, Herndon High School will host their annual STEP event StompFest at Herndon HS. Tickets will be available for purchase at the door.

The Herndon High Step Team performed at the Strathmore on Saturday, Jan. 16 to celebrate and honor the work of Dr. Martin Luther King, Jr. This effort was partnered with “Step Afrika” and 6 other step teams from New York to southern Virginia. The Step team was given a standing ovation and crowd support throughout the performance. The world’s first professional step company Step Afrika! promotes virtues, such as teamwork and discipline, and engages with the community through step, a percussive dance made popular by several Historically Black Colleges and Universities. “They had kids from as young as six years old all the way to college. It was a really nice compilation of all the ages, and was amazing,” said STEP team sponsor Heather Coleman.

COMPETITIONS will continue until May. Founded in 1994, this year’s Herndon HS STEP team is a diverse group of about 30 students. In March, Herndon HS will host their annual STEP event StompFest. Although Herndon HS STEP team will not compete, they will participate. Tickets for the event will be available at the door. Herndon HS Drama is preparing for a February show of "Cinderella: The Oldest Story Ever Told."

A group representing 39 Herndon Writing Center tutors attended the Capital Area Peer Tutoring Association’s 2015 conference at George Mason University in October 2015. At that conference, tutors attended presentations about the ways public writing projects can help build community in schools and create a positive school culture. The tutors were inspired by this idea, and Nancy Belmont’s Courage Wall, which was installed in Alexandria this past spring. After watching Candy Chang’s TEDTalk, “Before I Die, I Want to…,” the tutors decided to bring a Courage Wall to Herndon HS.

They will follow Nancy Belmont’s model, so there will be spaces on the board for people to anonymously complete the sentence, “I wish I had the courage to…” Herndon Writing Center is a student-run, teacher-directed space where students can come to get peer feedback on any kind of writing: 39 tutors work with HHS students on a variety of writing projects, and they work on various self-directed writing projects on their own.

Herndon High School had a showing in a band competition held at McLean High School on Jan. 9. Herndon had 15 students selected as participants or alternates in this year’s festival. “I’m extremely proud of the hard work that our HHS students regularly put into their instruments, and these results are just a reflection of years of consistently focused determination. This particular group of students is one of the most enthusiastic and motivated groups I’ve ever taught,” said school band director Kathleen Jacoby.

Herndon High School had a showing in a band competition held at McLean High School on Jan. 9. Students have praised band director Jacoby’s leadership, and look forward to the District Festival to be held Feb. 4-6.

THE PRIDE OF HERNDON Marching Band has three students participating in the Wind Ensemble, the district’s top band, and four with invitations to audition for All States. James Adams, Jacob Reeves, and Aimee Toner, along with Ben Clark, principal trombone in symphonic, are eligible for the All-Virginia Band, whose auditions will be on Feb. 28. Students have been praising Jacoby’s leadership and encouragement, and look forward to the District Festival which will be held Feb. 4-6 at Herndon High.

“The District Festival will show the best music players across Fairfax County. We will put on a really good product, and it will be a lot of fun,” said senior Jacob Reeves. “We’re excited to host the District Band event here at Herndon this week,” said Jacoby.

Students from all over Northern Virginia will form three bands: the Junior Band, Symphonic Band, and Wind Ensemble. The students will have a sight reading session (where they see the music for the first time ever) on Thursday night, then practice all day Friday, and perform a full concert on Saturday. The concert begins at 3:30 p.m. and is free and open to the public.

For more info on the Herndon Marching Band visit www.herndonband.org.