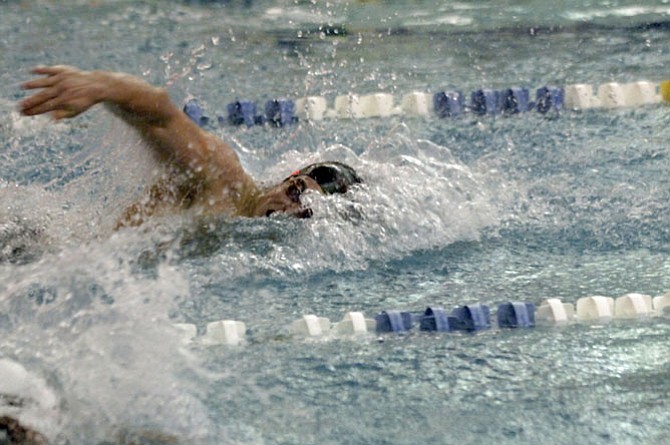 After producing a pair of record-setting sprints and helping capture another relay victory, Bennett’s evening ended with the celebration of a team title, as well.

The Langley boys’ swim and dive team repeated as conference champion on Jan. 30 at Washington-Lee High School in Arlington. The meet was condensed into a one-day timed finals format due to snowstorm-related school closures.

Langley won each of the three relays and took home five individual championships.

“Fantastic,” is how Langley head coach Ryan Jackson described the Saxons' performance. “The boys really showed up, ready to compete to defend their conference title from last year. They were really motivated, really excited and they did a great job across the board, every event.”

“He’s swimming great,” Jackson said. “He’s doing really well. This has been a really strong year for him. ... He’s really, really stepped up his game the past couple years. It was funny, a couple years ago, he and I were talking and he’s like ‘You know, I like swimming but I don’t know if I’m going to do it all the time,’ and now he’s swimming Division I next year. He really has committed himself.”

BENNETT has high expectations for regionals and states.

Jackson said the Saxons are aiming for a top-three finish at regionals and states.

“Regionals, we’re certainly going to try to give Robinson a run for their money,” he said. “They’re definitely the clear favorites.”

Langley junior Isabella Rongione finished first in the 200 free and 500 free during the Conference 6 championship meet on Jan. 30 at Washington-Lee High School.

“She’s about at that same (freshman) level,” Jackson said. “She really had a breakout year her freshman year but she’s been sort of very consistent from that point.”

“We’ve got a lot of youth on the girls’ side and we certainly have some talent on the top end, like in the [200] free and the [500] free ... but after that it kind of drops off,” Jackson said. “We just definitely don’t have the depth on the girls’ side that we do on the boys’ side to be so dominant. The girls swam well, just not well enough.”

McCulla won the 200 IM championship with a time of 2:06.33. Eksteen broke the conference meet record in the 100 backstroke with a time of 57.78, but finished second to Madison sophomore Madeline LaPorte (57.71).

“After all the canceled practices because of the blizzard, the team really responded well and exceeded expectations,” McLean head coach Kyle Drake wrote in an email. “It isn’t easy with the number of days off to be able to get in and compete at a high level, but we pulled it off. Over 75 percent of our swims were season bests and a number of athletes achieved personal bests. I am really proud of their effort and performances on Saturday.”