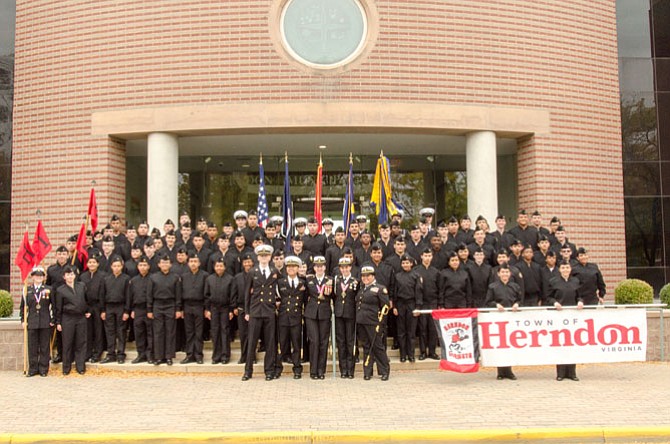 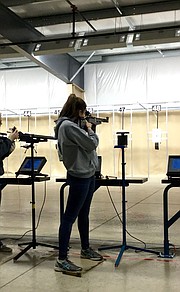 Allison Maxwell, a senior at Herndon High School, made Herndon Navy JROTC history. For the second year in a row, she competed in the Navy JROTC Service Championship, held Feb. 18-20, in three regions throughout the United States, including Camp Perry, Ohio, where Maxwell competed as an individual representative of Area 5, composed of units in Virginia, Maryland, and the District of Columbia. Out of a national field of over 2,800 Navy JROTC marksmen who shot the qualification match, she received her invitation after finishing second in Area 5’s Secretary of the Navy Postal Competition.


“I was so excited to represent my unit, school, and Area 5 once again in the sporter air rifle class at Navy Nationals,” said Maxwell. “In addition to being an honor, it was really fun and a great experience.”

After shooting close to her average on the first day of competition, Maxwell fought from behind to score a personal best of 554 and earn herself a spot in the finals. During the intense ten shots standing/fifty seconds per shot match, Maxwell earned the second highest score, overtook Illinois’ Luis Nevarez, and finished with 1178.2 points. This earned her a seventh place finish in the Navy service and a tenth place finish among all of the services, including the Navy, Marines, Army, and Air Force. She is now ranked 22nd among all Navy JROTC marksmen in the nation. After this experience, she also learned that she had reached a long-term goal -- securing her Junior Distinguished Badge, the mark of excellence in high-level, three-position air rifle competitions.

Cadet Maxwell said, “I am so grateful to the Herndon Navy JROTC for providing me the opportunity to learn a new sport and to compete at the national level. It has made me a better leader and student, and it has opened many doors for me.”

For four years, Cadet Maxwell has been a top athlete on the Herndon Navy JROTC Rifle Team, where she was coached by former Senior Naval Science Instructor, Richard Cassara, CDR, USN (retired) and by Kris Young, LTC, USA (retired).

Maxwell currently is the Executive Officer of the Herndon Navy JROTC and the Commanding Officer and Coach of its Rifle Team.

Maxwell also competes in the Potomac High School Rifle League as a precision shooter under the instruction of Mavericks Coach Tom Pike.

Maxwell is a National Merit Commended Scholar and an Advanced Placement Scholar with Distinction. Maxwell plans to attend college next year and study biology, psychology, and neuroscience. She hopes to become a pediatric neurosurgeon.


Herndon High’s Navy JROTC is for anyone interested in real leadership experiences, teamwork, and/or high-level competition. There is no military commitment. To learn more about this program, contact David Adler, Captain, USN (retired) at 703-755-5710 or dbadler@fcps.edu.