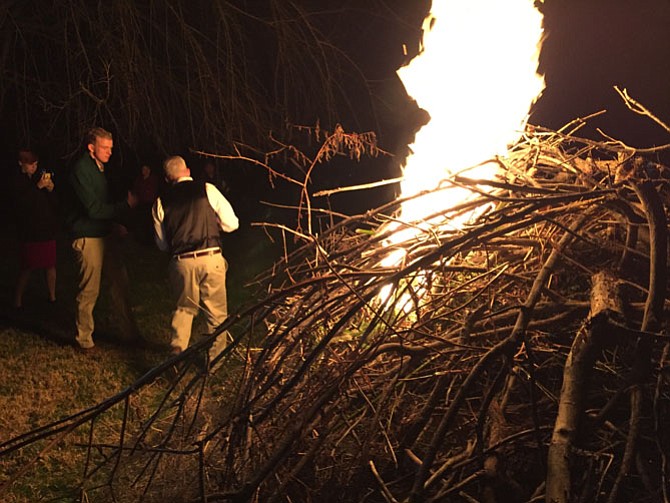 Bill Conway with son Will as the bonfire starts during the family’s annual Christmas party. Photo Contributed 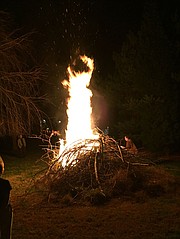 A bonfire lights up the night during the Conways’ annual Christmas party at their River Road home.

“It’s happened before,” Diana said, referring to calls from passers by reporting smoke. She was referring to the family’s annual Christmas party, that for 20 years has featured “Traditional Libations, Unruly Hounds, Bonfire (7:30 p.m.), Roast Beef, Songs of the Season,” all mentioned on the invitation. It’s the bonfire smoke that wafts toward the road near

Potomac Elementary School that grabs the attention of motorists driving by.

The Conways greeted over 200 guests at the Dec. 20, 5-9 p.m. party, most of whom hadn’t a clue that earlier in the day Bill had grilled two turkeys. six legs of lamb and four standing ribs of roast on the outdoor grill. “He does it every year,” Diana said. “He also makes Quoit Punch,” she added, referring to the rum punch served in the library.

A family friend, Carole Funger, tickled the piano keys, as she has for years, accompanying those who gather for caroling, putting a traditional touch on the annual Christmas party.

Maria and Jim Fusco had just arrived in Potomac from a Costa Rican trip at 1:30 a.m. Sixteen hours later she made it to the party, sans Jim, carrying her traditional rum cake she made that day.

The Fusco’s daughter, Kathryn, home from her freshman year at the University of Denver, was also there as were the Conway children Will, a senior at Brown, Catherine a junior at Dartmouth and Alexandra who will enter Dartmouth’s freshman class this fall.

Others at the gathering included U.S. Rep. Chris Van Hollen; state Sen. Jamie Raskin; County Councilman Marc Elrich; Curt Uhre;, George Barnes; Vernon Ricks; Holly Hand and scads more all partaking of Christmas cheer. None of the Conway children will recall the first of the traditional parties. Will, the eldest, was barely a one year old, but a few attending this year could remember it well, even though they are a bit long in the tooth this season.

These three foxes on a log were pictured on an invitation to Rose Marie Bogley’s hunt breakfast for a joint meet with Potomac and Piedmont Hunts. Unfortunately, bad weather cancelled the hunting, but was no deterrent to a lively Christmas party.

A 15-foot, candle-lit, Christmas tree in Rose Marie Bogley’s center hall at her Upperville, Va. home, was a welcoming sight for over a hundred guests attending, many from the Potomac area. The original plan was a joint fox hunt with Potomac and Piedmont (Va.) hounds. However, once again Mother Nature ruled. Last year it was snow, this year heavy rain.

“No horses and hounds again,” Rose Marie, dressed in a bright red coaching coat, as opposed to hunting attire, lamented as she greeted guests from both hunts. The original invitation read “Piedmont Hounds-Jt. Meet with Potomac will meet in the front field at 10 a.m. Christmas Hunt Breakfast, Dec. 17, 12 noon.”

No horse trailers parked in fields or hounds and huntsmen gathered nearby were in evidence again this year. Only lots of cars lined up in the driveway, many with Maryland tags.

Those who made the trek to Upperville, including Sue Moran, Susan Monahan and her daughter Lisa Arrowsmith; Dr. Csaba Magassy, Leonard Proctor and Vicki and “Skip” Crawford, were among numerous guests who crossed the Potomac for this annual event.

Replacing the fun of galloping through woods and jumping fences was cozying up to a beautiful and bounteous table decorated with a woodland scene of greens, pines and deer figurines.

The production of “Another Holiday Chiming At Fox Hill” inspired the epitome of Christmas spirit, not only from the talented group performing there but from the audience invited to join in the grand finale.

Fox Hill resident, Nan Muntzing, known in the area for her singing, playing (piano) and show productions, again gathered together a group of exceptionally talented singers for the occasion. They included Troy Knighton, Dawn Badrick, Ann Hazard, Vin Kelly, Jeff Kelly, Alice Page Smyth, and her husband Michael Terence Smyth at the piano, all of whom joined in to entertain residents of Fox Hill and their guests for an evening of seasonal music.

There were very few silent voices when the entire room full of those attending were invited to sing along with delight from “Jingle Bells” to “Silent Night.”

The year 2015 blossomed with exceptional celebrations including the birthday party Vicki and Skip Crawford hosted in honor of Leonard Proctor’s 85th birthday in mid-April. The weather was perfect for the afternoon event when dozens of friends and family members arrived for a late afternoon buffet and naturally, the cutting of a huge cake, one of four Leonard was presented with in as many days.

The “Ladies Equestrian Gourmet Society,” a.k.a. “LEGS,” planned the buffet party held outside under two huge white tents, none of which was necessary due to an unusually warm and sunny April afternoon.

Known for his expertise with horses, with bartending at many Potomac parties, and on the dance floor, a microphone was available for guests to address Leonard and recall many tales of the past. The most oft repeated was his ability in assisting Potomac hosts at their private parties, seeing and hearing all and telling nothing. Sara Lee Greenhalgh said it first. She mentioned Leonard’s wealth of many Potomac secrets and added, “he could tell many stories, but I know he never would.” Susie Monahan plead, “Leonard, please don’t write the book!” Not that he would even think about doing so, but it sure would be a best seller.

Another celebrating Leonard’s 85th was Bob Hanson who just a few days earlier had celebrated his 91st . As it’s been said before, there’s something unique about these horse people and their longevity. Grooming, polishing and shoveling. It’s good for the soul and old age. 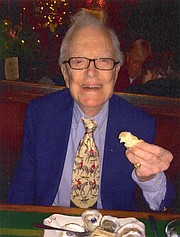 Ambassador Joseph Smoak celebrated his 99th birthday on July 8, 2015. He played polo in Potomac and often hunted with Potomac Hunt.

Horses and longevity can’t possibly be mentioned without reference to Ambassador Joseph Smoak’s party, July 8, in Chevy Chase when he celebrated his 99th birthday surrounded by many friends and family including his daughter, Dr. Mary Frances Walde and her husband, Bill, who hosted the party at a private club.

Three weeks prior to Joe’s 99th birthday party an article in The Washington Post stated that Martin’s Tavern, Georgetown, was reportedly where John F. Kennedy proposed to then Jacqueline Bouvier on “the evening of June 24, 1953.”

For years, Martin’s Tavern owners have believed this to be accurate, but others have doubted it.

Enter former Ambassador Joe Smoak, former Chief of Protocol, fox hunter, polo player and a Martin’s Tavern occasional customer. On V.E.Day, May 2015, Joe went to Martin’s for their special World War II vets free meal day. It was then that he mentioned he was there the evening Kennedy proposed to Bouvier. He said he saw them, didn’t hear the proposal, but “after she

accepted, the news ran through the restaurant.”

It would surprise no one if Joe shows up at his100th birthday celebration astride his horse.

Another near certainty will be a raw oyster bar. Oysters are one of his favorite delicacies.

Lorrie and Peter Plamondon, center, are surrounded by 22 of their children, grandchildren and two great-grandchildren at the celebration of their 60th wedding anniversary last August.

Memories of their wedding date include Hurricane Diane. “It was one week after ‘Diane’ on a perfect August day,” she said. Although it was a “perfect August day” there were still numerous interruptions up and down the east coast, causing one bridesmaid to be rescued from a stalled train by a groomsman who just happened to be en route by car and passing through Connecticut where the train sat.

Both Lorrie and Pete are Cornell graduates. “We met at a bar in the DKE (Delta Kappa Episilon) house,” Pete offered. Sixty years later they are dedicated to Cornell and have retained close ties with many of their classmates, including some who attended the party at Columbia.

Pete, who graduated a year before Lorrie, was in the School of Hotel Administration. Prior to retirement he established Plamondon Hospitality, Inc., a chain of restaurants and hotels.

Some stories at a gathering of several generations of many friends and relatives are legend. At this party there was one tale about what the priest, a good friend of Pete’s, said to him at the wedding. He whispered, “If you don’t want to go ahead with this you can leave now. If you stay, it’s forever.” Pete took it seriously.

A grandson at the party, Brian Plamondon, 20, was one of many who also had tales to tell.

Apparently it’s well known that their grandparents attend every extra curricular activity the grandchildren are involved in, if at all possible. This included a baseball game Brian was in at age 10. “Poppy was there with me. It was the only time I ever hit a home run and he missed seeing it. He was off buying a hot dog,” Brian told the guests. It was one of many recollections given and received with great humor.

Scores of Potomac friends were there for the occasion including John and Theresa Cini, both Cornell classmates; Fran Biselle, Patti Marsh, Carol and Bob Plante, Jim Rill, Sue and Bill Tull, Ailcey and Bill Werber and dozens more. The Plamondon children Jim Plamondon and wife, Cary; Peter, Jr., and wife, Gail; and Anne Plamondon and husband Dr. Tom McNamara were in a family portrait that also included 13 grandchildren and two great-grandchildren.

With so many offspring, many still living in the area, it’s a safe bet Plamondon celebrations will be going on for many years to come. So will the anecdotes.

Happy New Year to all.