How Virginia’s decision not to expand Medicaid impacts Arlingtonians. 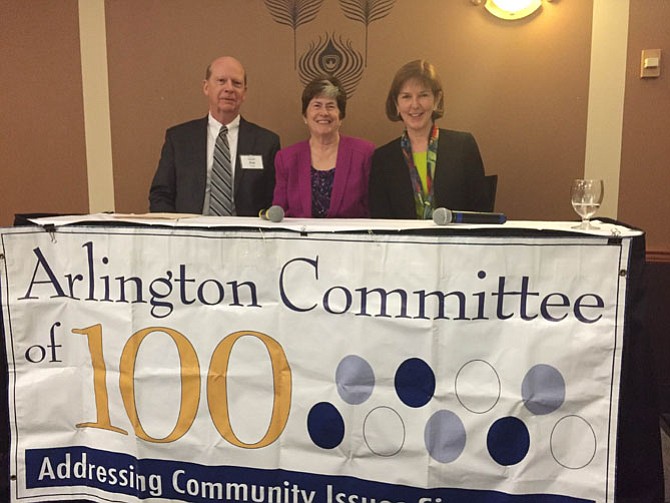 Where do you go when you’re sick?

For most Arlingtonians, the answer would be the hospital. But for 170,000 people in Northern Virginia, the answer is not so simple. Thirty states have chosen to expand Medicaid benefits to those who are ineligible for the Affordable Care Act coverage, while Virginia is one of the 20 that have not. Expansion would reinvest $2.5 billion into these hospitals, all of which is from federal taxes already paid by Virginia citizens. But the problem doesn’t just affect Arlingtonians without insurance. At an event on Jan. 13, leading regional experts and advocates for healthcare reform told the Arlington Committee of 100 that the decision not to expand Medicaid will have a substantial effect county-wide.

Mary Margaret Whipple, former County Board member and state senator, represented the Virginia Hospital and Healthcare Association. Whipple argued that the decision not to expand Medicaid coverage could have major economic impacts. According to Whipple, there are 107 hospitals in Virginia, and the majority of them are non-profits. They create $36 billion in economic activity and provide 115,000 jobs. In Virginia, one in nine jobs is related to the healthcare field. But hospitals aren’t doing so well in Virginia. Whipple said that half of the rural hospitals in Virginia “in the red” and one, in Lee County, recently had to close.

“What kind of company is going to want to move into an area where their employees don’t have access to a hospital?” asked Whipple.

James Cole, president and CEO of Virginia Hospital Center in Arlington, says hospitals treat anyone that comes in through their doors, and that the decision not to expand Medicaid doesn’t change that. However, Cole noted that having the emergency room as a patient’s primary care is costly for Arlington at large.

“If they have a heart attack or a car crash, they will receive good care,” said Cole. “But when [the patient] is discharged, they don’t have a doctor who can help take care of them.

“Diabetes, asthma, congestive heart failure, all of these are issues that have acute episodes that will put a patient back into the emergency room, but could be managed with proper medical access. The emergency room is their primary care, which is the most expensive medical care you can get.”

But Cole says that this impacts his hospital’s ability to care for all patients, not just those who can’t afford health insurance.

Cole says his hospital has 350 beds for in-patients, those who need to stay overnight. But at one point in the week before his event, Cole said that they had 450 in-patients in the hospital. The hospital is forced to schedule procedures so that patients’ stay in pre-operation or post-operation is largely dictated by bed space.

Without healthcare expansion, fixing the problem is next to impossible. Cole says that any expansion would cost at least $200 million, which would require hospitals to issue bonds, which Cole says difficult due to because of some hospitals’ poor financial rating.

Nancy White, executive director of the Arlington Free Clinic, said the only group that isn’t impacted by the lack of expansion is the uninsured, who are already in the worst situation.

“Most of our patients are below 20 percent of the federal poverty level,” said White.

While the median income of Arlington County is $100,000 per year, White says most of the Free Clinic’s patient have a median income of $15,000, even while over 70 percent of their patients work more than one low-wage job.

When the audience was allowed to ask questions, several centered around questions of why the majority of the state legislature opposed expansion.

“It still boggles my mind,” said Whipple. “It has become a partisan, political issue.”

But the panel was made up exclusively of representatives advocating for healthcare expansion, which some attendees found upsetting.

“I wish we could have had some presentation by someone who opposes [health care expansion],” said Lola Reinsch.

The committee members did, on request, note that opponents of the planned expansion have concerns about long-term decreases in funding levels from the federal government. However, Whipple followed up by noting that the legislation to increase funding levels comes with the option to stop funding expansion if the federal levels drop, and that the hospitals have offered part of their already strained budget to cover the cost of decreased federal funding.