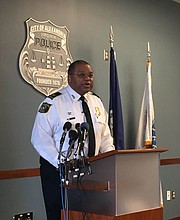 After months of investigating, two of Alexandria’s 2015 homicide cases may have been solved. Police announced on Jan. 13 that suspects were in custody for the murders of Jose Luis Ferman Perez and Eduardo David Chandias Almendarez. Though the arrests came on the same day, police say the two murders were unrelated. However, all suspects involved, according to police, share one common theme: MS-13.

As the investigation transitions into prosecution, Alexandria Police were careful about letting out too many details on the case. However, the emerging information suggests that each of the suspects involved in the homicides were somehow connected to the international gang Mara Salvatrucha (MS-13). The homicides are the latest in a string of violent crimes throughout Northern Virginia committed by members of the gang over the last few years.

On Nov. 9, the body of Jose Luis Ferman Perez was found in Alexandria’s Beverley Park. The cause of death was stab wounds to the head and neck. Police say three suspects were involved in the murder: a 17-year-old male charged with the murder, an adult that Police Chief Earl Cook said was not much older than the other who was being held in another state awaiting extradition, and a 16-year-old female in custody to be charged as an accomplice. Because he was still being held in another state, police were unable to give the name or current location of the suspect. According to police, the two men are members of MS-13, while the girl was considered a gang associate.

Cook said he wished he could be surprised at the age of the suspects, particularly the involvement of a 16-year-old.

“I’m not surprised, but it is tragic,” said Cook. “Unfortunately, teenagers are involved in all types of crime.”

The other murder was of Eduardo David Chandias Almendarez, a 22-year-old found dead in Four Mile Run Park. Like Perez, Almendarez was found found with stab wounds in the neck and head. Police charged 18-year-old Arlingtonian Edwin Alexander Guerrero Umana with the murder. Police confirmed that all of the suspects in both cases were in the country illegally. As with the suspects in the Perez murder, Umana is a member of MS-13, according to police.

“All suspects had gang ties,” said Cook, “though some were not gang motivated.”

One of the central distinctions between the two similar murders is that Perez’s murder in Beverley Park was considered gang-related, while Almendarez’s murder in Four Mile Run was considered gang-motivated. A gang-motivated crime is one whose actions are intended to further the agenda of the gang, while a gang-related crime means that the suspects are members of a gang, but the crime itself was not committed for the benefit of the gang. The example police used was if a member of a gang were to shoplift, the crime would be considered gang-related but not necessarily gang motivated. However, beyond this broad distinction, Cook was unable to further speculate on the motives behind the crime.

Cook said that the initial investigations had looked to see if the crimes were related, but that detectives quickly determined that they were going in “divergent paths.”

At the press conference, police clarified that neither victims were confirmed as gang members.

“[The victims] being a gang member is irrelevant for us,” said Cook. “He was a human being who lost his life.”

Umana, the suspect in the Four Mile Run murder, was officially arraigned on Jan. 14 in a video conference from the Alexandria City Jail. He spoke via Spanish translator and was granted a court-appointed attorney given an unspecified conflict from the public defender’s office. The next court date was set for Feb. 23.

In the November/December 2015 Quality of Life statistics released by the City of Alexandria Sheriff's Office, of the 34 gang members identified in the Alexandria Jail, 27 were part of MS-13. Joe Runquist, Gang Unit coordinator with the Alexandria Sheriff’s Office, says newly arrived prisoners are screened for gang affiliations and run through federal databases. The objective is to check for prisoners who would need to be separated from other members of the general population, though for the most part Undersheriff Tim Gleeson says gang members in jail keep to themselves.

“Gang members don’t spend all their time glaring at each other across the room,” said Gleeson. “Most just want to do their time.”

Many gang members have MS-13 tattoos, some with the gang name, others with identifiers like widespread pointer and pinky fingers in the sign of horns or “503,, the area code for El Salvador and home for most members of the gang. Their reasons for being detained range from being held in federal custody to a few drunk in public misdemeanors. As in the Police Department, no one in the Sheriff’s Department is particularly surprised at the age of the suspects.

“When they’re young, they want to make a name for themselves,” said Runquist. “Many don’t have family here, so the gang is their family. You’re a kid and someone from the gang gives you some money. Later you put some work in, and suddenly you’re in the gang.”

But for most, it doesn’t last.

“You grow out of it, like an old pair of shoes,” said Runquist. “When you’re young, the gang gives you a sense of belonging. But once they get older, they fall in love and she doesn’t want you in that life, then they start having kids or having a job, and they regret that it.”

Runquist has seen a few scars on inmate’s backs where an inmate had his MS-13 tattoos removed. One way of reaching members of the gang seems to be through faith-based services. Runquist says many of the gang members are very religious, attending the church services and studying the Bible on Saturday nights. The Sheriff’s Office also offers GED programs and substance abuse treatment for inmates, but Runquist emphasises that the inmates have to want to change.

More effective is gang prevention. Several members of the Sheriff’s Office and Police Department are part of a mentorship program for local children. Sheriff Dana Lawhorne said his office recently reached out to Casa Chirilagua, a faith-based organization with deep roots in North Alexandria’s Latino community.

“The senior command staff went out to talk about how we can help,” said Lawhorne, who said that as a result, many deputies volunteered to attend monthly family nights and are planning on hosting one.

“It’s our responsibility to reach out and create a positive influence,” said Lawhorne, “to offer alternatives. We have to get to them before the gangs do.”

Joseph Regotti, Alexandria’s Gang Prevention and Intervention coordinator, is part of that effort.

“My biggest mission is mitigating gang recruitment,” said Regotti. “Gang recruiters look for kids with vulnerabilities. They look at kids who have problems in their family. Issues at home or at school. Kids who are a victim of bullying. Those are the vulnerable. They’re the ones in need of prevention, outreach, and education.”

While MS-13 is at the forefront of the police investigations, Regotti says the city deals with a broad range of gang types.

“We have all types of groups that are recognized as street gangs,” said Regotti. “These are kids who identify with a certain group. It could just be kids who want to name their group something. There are all kinds of gangs and wannabes.”

Regotti says the key to reaching the potential gang recruits is understanding their culture.

“In general, Alexandria is a diverse population,” said Regotti. “We have new arrivals who are here from various countries. An important piece is making sure the services are culturally competent, like for the newly arrived Central American community or the Ethiopian community. Part of that is language. Part of that is understanding reasons why people come here. Understanding differences, generationally and with cultural expectations. It’s about empowerment and educating the parents on being involved, helping parents identify problems and potential problems, and helping parents take the initiative and reach out before there’s a crisis.”

But some still slip through the cracks, like the suspects in two of Alexandria’s homicides.

For the other two homicides earlier in 2015, Cook says the department is making progress.