Brain Injury Services in Springfield gets survivors back into the community 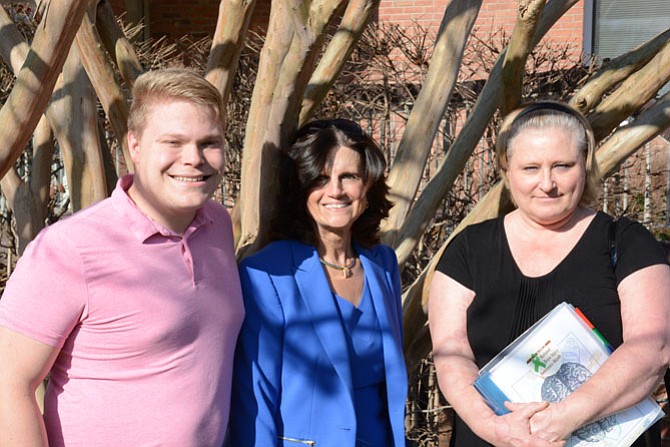 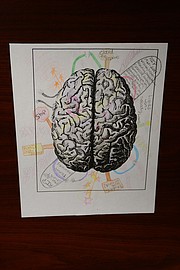 As part of her therapy, Kim Daily made illustrations to reflect her thoughts on the state of her brain after it sustained a traumatic injury.

In one moment, Kim Daily’s life changed forever. It was September 2011 and the Centreville resident was in a car accident where she hit her head. Afterwards she experienced some numbness and pain in her neck.

“I knew something was very wrong,” Daily said.

Daily consulted a neurologist since she was also hearing things and having difficulty standing up. The doctor said her brain had been injured in the accident, and that it “would either heal or not.”

Depression set in as Daily tried to deal with headaches, completely losing her short-term memory, problems balancing and other cognitive difficulties.

“Nothing works the way you used to,” said Daily.

She got on the Internet looking for support, information, recovery groups, anything to help her get turned around. Daily found Brain Injury Services, a nonprofit organization based in Springfield that works with children and adults who have suffered brain injuries to rebuild skills and confidence that will help them get back into the community.

Daily was put on a waiting list for a case manager, at that point six months after her accident, and in the meantime started attending monthly group meetings with other people recovering from brain injuries.

“Just to be in the same room with people who understood,” was huge for Daily, she said. “Just to have someone to listen, who will say ‘It’s not always going to be this bad.’”

Daily eventually got paired with a case manager, who recommended a therapist and different neurologists, and helped her get organized. With detailed notes and a calendar she takes with her everywhere, as well as a regimen of medicines, Daily is working again in a Springfield florist shop and making her recovery.

WITH A STAFF OF 32, Brain Injury Services serves people throughout Fairfax County and has satellite locations in Woodbridge and Loudoun. Eighty percent of its $3 million budget comes from the Commonwealth of Virginia and about five percent is funded by Fairfax County. The remainder comes from private and corporate partnerships.

By keeping overhead low, executive director Karen Brown said, the 26-year-old community-based organization is able to devote about 96 percent of that budget to services for clients.

Brown has been active in the field of disabilities for 44 years, after her uncle, a New York State trooper, was hit head-on and there weren’t sufficient services for his recovery available. “That always resonated with me,” she said.

Case manager Claire Callison of Burke meets with between eight and ten adults on a monthly basis, helping them make and then pursue a goal plan. Some are in crisis, in danger of losing their income or house.

Callison connects them with resources, other counselors, and eventually redeveloping skills like gardening and home maintenance. As the individual progresses, they also work on peer-to-peer relationships, volunteering and apartment coaching, depending on the living situation.

“It’s open-ended,” she said, “closure is based on completion of those goals, when there isn’t a need for services anymore.”

With the December 2015 release of the movie “Concussion” starring Will Smith as Dr. Bennet Omalu, who discovers brain deterioration in a dead NFL player, Brown is hopeful more people will educate themselves on all brain injuries.

“I really wish we were out of business,” Brown said. “This is preventable.”

Particularly for athletics Brown points to the understanding of Second Impact Syndrome, a potentially fatal case of sustaining a second concussion before the first one heals, as necessary education. 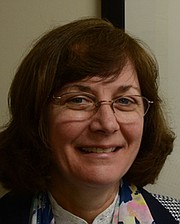 One impact was all it took to remove Barbara Armistead of Fairfax from a game of co-ed softball. The centerfielder was sprinting to second base when she was hit in the head by a ball thrown to get her out.

Armistead didn’t immediately go to the hospital, opting to call a nurse’s line and rest at home. But when symptoms of headaches, nausea, distorted, foggy senses and sensitivity to light kept her home from work at Northrop Grumman for a week, she met with a family doctor and neurologist, and looked to Brain Injury Services.

LIKE DAILY, Armistead started with group sessions among other brain injury survivors, and then linked with a caseworker in August 2015. She also takes an active role as her own advocate. “I jump on my symptoms and figure out what I have to do.”

“Sleep was critical to be able to recover,” she said, of getting between nine and 12 hours of sleep a night.

While both Armistead and Daily are still recovering, they acknowledge irreversible change. “You just need to accept your life is never going to look the way it did before,” Daily said.