In the pipeline for Great Falls ... 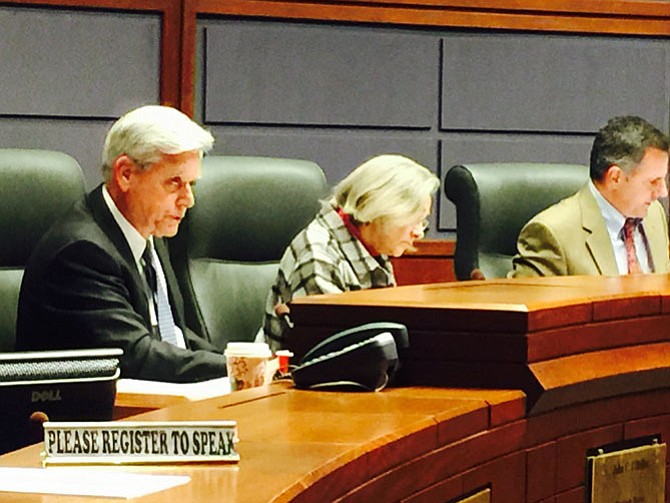 Fairfax County Planning Commission John Ulfelder, Dranesville’s Commission, had dozens of questions for speakers at a public hearing regarding Brooks Farm. The hearing started on Thursday, Jan. 21 and ended at 2:02 a.m. on Friday, Jan. 22. Photo by Ken Moore.

Eric Knudsen, president of the Great Falls Citizens Association, reminded Planning Commissioners about Great Falls’ role in protecting the health of the Potomac River as it decides an application on Brooks Farm.

Several times a year, the Connection will map coming land use issues; to let us know about projects we’re missing, email kmoore@connectionnewspapers.com

The Planning Commission listened to public input until 2:02 a.m. on Friday, Jan. 22 on Basheer/Edgemoore-Brooks proposal to rezone the 51.9 acre Brooks Farm property from the R-A zoning district to R-E Cluster (Residential Estate). The applicant proposes to build 20 single family detached homes. Great Falls Citizens Association has held numerous meetings on the proposal, touching on environmental questions including septic, well, stormwater and tree canopy. In May, GFCA voted for a resolution to oppose the cluster redevelopment plan.

The Planning Commission is scheduled to reconvene on Feb. 4 to make its decision and recommendation to the Board of Supervisors on the application.

Idyllic but controversial. More than 1,400 residents oppose a proposal to develop Brooks Farm off Springvale Road into 20 cluster houses. Planning and Zoning is expected to hear the proposal in a public hearing in June.

The Gulick Group submitted a pending application to rezone 10500 Leesburg Pike (portion of the Hills Nursery) to 10 lots on 11 acres that have been zoned R-A since 1991. The property is located in an area east of Springvale Road and at the terminus of Challedon Road. The property is surrounded by the Lexington Estates and contains a significant environmentally sensitive area.

Langley High School is currently being renovated in a project approved by a bond referendum in 2013.

Langley High School continues to give updates on renovation progress on its website at fcps.edu/LangleyHS.

The auditorium and performing arts area, and administrative suite is on track to be completed soon. The new science wing in the rear of the building is scheduled to be completed in the spring. The construction at Langley High School will completely modernize the McLean/Great Falls school that was originally built in the 1960s. Fairfax County voters approved the $68 million project in a 2013 bond referendum.

VDOT has scheduled an informational meeting about its proposed $4.1 million project to replace Walker Road Bridge over Piney Run on Feb. 3 at Forestville Elementary School, 1085 Utterback Store Road, from 6:30 to 8:30 p.m. If cancelled due to weather, the hearing will be held on Feb. 11, 2016.

Walker Road Bridge was constructed in 1932, is 19 feet in length and 22-feet wide. It can accommodate alternating one-way traffic.

The new bridge will consist of a 50-foot-long single-span structure with a total width of 40 feet and will accommodate constant two-way traffic without the use of existing yield signs. The new bridge will include an attached 6-foot sidewalk on the west side of the road to accommodate future trails planned by the county.

Construction, at the same location as the existing bridge, is scheduled to begin and end in the summer of 2018, according to VDOT.

In June, The Board of Supervisors approved Trinity Land’s application for a special exception to build 30 single family units using a cluster development configuration on the 28.9 acre property formerly known as Woody's Golf range. The site is zoned R-1 (one dwelling unit per acre) and is located in the Dranesville Tavern Historic Overlay District.

“Woody's Golf Range is now closed. We want to thank you for letting us be part of such a wonderful community. We have loved serving our customers for over three decades, and we will always cherish the memories of our great customers. We hope that you will continue to keep up with us to see where we go next,” according to Woody’s website.

VDOT cancelled two scheduled meetings for early in January, but will hold additional meetings this winter with HOAs by request regarding the ongoing $265 million project to widen Route 7 from Reston to Jarrett Valley Drive. The project will widen Route 7 from four to six lanes from the intersection with Georgetown Pike to the Dulles Access Road, continuing the widening that is ongoing northwest of Georgetown Pike now. Since February 2012, a working group has met ten times and discussed topics including environmental impacts, land development along the corridor, bicycle and pedestrian needs, innovative intersection designs, high occupancy vehicle (HOV) lane feasibility, mass transit and bus service, and preliminary stormwater management needs. Acquisition of rights-of-way is scheduled for 2017, and construction is scheduled to begin in 2021. See http://www.virginiadot.org/projects/northernvirginia/route_7_widening_-_reston_ave_to_dtr.asp. 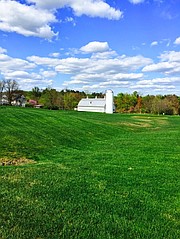 Turner Farm was saved from development by a public private partnership started in 1994 to "Save the Farm." Great Falls Citizens Association hopes for the Turner Farmhouse to be selected for the county’s Residential Curator Program.

The Fairfax County Board of Supervisors approved an ordinance that permits a Residential Curator Program for unused, publicly-owned historic properties to be leased to individuals or groups for little or no rent. This can provide the opportunity to preserve historic properties at a minimum cost to taxpayers and can put the property to practical use as residential, office or commercial space. Curators would be required to rehabilitate and maintain the properties at their own expense.

John Turner (1808-1892) bought the original farm in 1869 and his grandson Mark Turner (1889-1959) purchased the 163 acres from his grandfather. Mark Turner was the first Master of the Great Falls Grange, member of the Virginia Milk Commission and Fairfax County School Board Member and Board of Supervisor.

The Observatory Park on the land off Springvale Drive is open which provides four permanently mounted telescopes. The Analemna Society partnered with the Park Authority to develop recreational and educational astronomy programs at Turner Farm, including Friday night star-gazing with summer viewing hours from sunset to 10:30 p.m.

Observatory Park will be closed in the spring of 2016 so a Roll-Top observatory building can be constructed. The Analemma Society will hold observing programs on Friday nights at Baron Cameron Park in Reston from 7 to 9:30 p.m. on Jan. 29, Feb. 5, Feb. 26, March 11, April 1 and April 8. See http://analemma.org/.

Equestrian facilities are also available at Turner Park for general riding. Use of the facilities is free and reservations are not required, but riders do need to bring their own horses.

Representatives from a dozen or so Great Falls organizations, coordinated by Jorge Adeler, have met monthly since October to plan making the Great Falls Grange the centerpiece of the community, as founding Great Falls farmers envisioned almost a century ago.

“The potential is extraordinary,” said Adeler. “The possible activities for community use, for youth, senior citizens, adults, artists, musicians, nonprofits and the entire community are endless.”

Last March, the community celebrated renovations to the 1929 Great Falls Grange Hall building that made it accessible to all.

“For far too long, it was not accessible to our residents with disabilities and to our senior citizens,” said Supervisor John Foust, who helped secure $350,000 for the $503,000 project from County carry-over funds in 2013. The Fairfax County Park Authority funded the balance.

“If the community groups come together the way I think they might and the way it was initially proposed, I see something more grand here.”