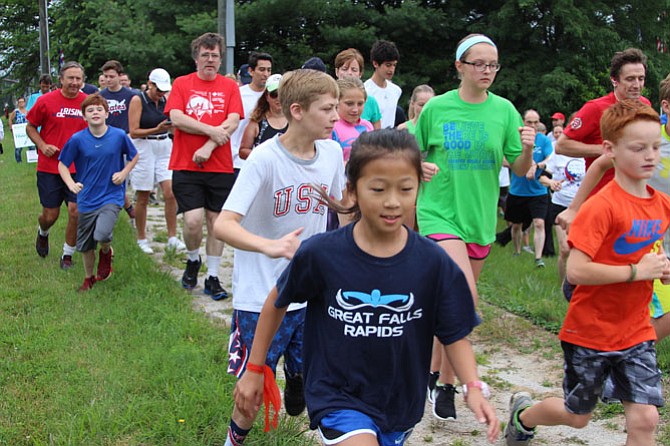 More than 100 people participated in the 5k run hosted by the Great Falls Trail Blazers on the morning of July 4. The run begins at the Freedom Memorial and ends in the field behind the library. Photos by Nikki Cheshire/The Connection

Although the weather forecast threatened rain and thunderstorms for the majority of the day, it wasn’t enough to stop hundreds of people from gathering in Great Falls for the annual July 4 celebration.

The festivities began in the morning with a 5k run on a trail created and maintained by the Great Falls Trail Blazers. The event brought well over 100 people who wanted to kick off their July 4 celebration with the family fun run.

“We endeavor to create trails to connect Great Falls,” said Julie Ben-Achour, the president of the Great Falls Trail Blazers, adding that they’re always reaching out to the community for their input and support on developing and maintaining trails.

“The biggest challenge we have is that we need more volunteers,” said Jean Reimers, the vice chair of the organization. “It’s hard work to clear trails. We spent a month preparing this trail for today.”

Lift Me Up co-sponsored the event, and lent a tractor to help clear parts of the trail.

Just 20 minutes after the beginning of the race, the first runner crossed the finish line. Wiehan Peyper, a triathlete who recently moved to Great Falls from South Africa, finished first in last year’s race as well.

“I just had to come and defend my title,” Peyper laughed. Great Falls resident Tanner Doverspike finished second, with his cousin Ryan Pino right behind him.

The rain held off through the rest of the morning, allowing for the Little Patriots parade to continue as scheduled. Dozens of families and young children decorated wagons and wore patriotic regalia as they paraded around the Village Centre.

At the end, prizes were awarded to groups for their presentation. The Star-Spangled Family award went to the Grindler family, the Little Miss Betsy Ross award went to Rebecca Fletcher, and the Young George Washington Award was given to Jackson Esposito.

As the Little Patriot parade wound down, hundreds of people started to line up in anticipation of the main parade. Scouts led the parade, which included fire and rescue vehicles, antique cars, horses, floats from community businesses, and more.

One antique car was specially painted in preparation for the event. “We’ve been here a couple of times receiving candy, and I have an old car so I figured, ‘might as well paint it and join,’” said Reston resident Doug Webb. He took his 1981 Fiat Spider, which was originally green, and painted it with the stars and stripes. He said it needed a paint job anyway, so he figured he’d have fun with it in the meantime.

After the parade ended, people dispersed to enjoy the food and activities on the Green, including inflatable soccer, obstacle courses, carnival games and music. However, in the late afternoon, the weather started to disagree, and rain set in for the majority of the afternoon and into the evening.

Despite the showers, the fireworks at Turner Farm were set to go as planned. Gates opened at 6 p.m., and the firework display was scheduled to begin at 9 p.m. While the crowd was thin in the beginning, a large crowd finally gathered just in time to watch the fireworks shoot into the sky, together.