A Tea in Vienna with a Taste of History
Votes

A Tea in Vienna with a Taste of History 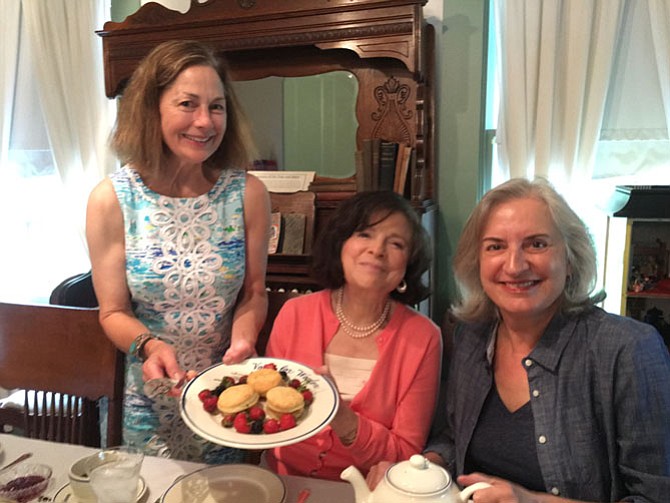 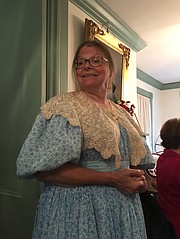 Historic Vienna, Inc. board member Leigh Kitcher brought suffragette Elizabeth Cady Stanton to life. Stanton was an early leading social activist of the 19th century. As Stanton, Kitcher said, “I fight for the rights of those weaker than me.”

Clothed in the dress of her day – mid-1800s, Ms. Elizabeth Cady Stanton greeted her guests demurely at a “tea” on Sunday, July 3, in the parlor of Freeman Store and Museum. An American suffragist, social activist, and leading figure of the [early] women’s rights movement, Stanton welcomed a small group of guests to the parlor of Freeman Store and Museum, speaking in character to clarify the momentous movement to give voting rights, equal rights, to America’s women. HVI board member Leigh Kitcher brought Stanton to life.

Twenty guests showed up for petit sandwiches, desserts, and tea, in the 19th-century setting of Freeman House, as “Stanton” spoke about her life in the equal rights movement before and after America’s Civil War. Most guests were aware of HVI’s mission in the community, to preserve and inform Vienna’s history.

“I wanted to support HVI,” said HVI member Kata Bartoloni-Tuazon about her participation in the “tea.”

“I thought this was a great idea and I like to support great ideas, especially in this year when we have a woman running for president,” Bartoloni-Tuazon said.

Her tablemate Nedda R. Thomas concurred with Bartoloni-Tuazon’s sentiments, and added, “I’m so happy to be here. I love HVI; it is a great group of people. If you want to be in a good group, this is it.”

Organized and hosted by HVI as a live outreach extension of its women’s rights exhibit housed in Freeman House, the tea and presentation offered a historical perspective of the women’s rights movement in the United States.

Born to “progressive” parents, Elizabeth Cady (Stanton) learned at a young and impressionable age – as a mid-teen – of the inequities facing females in the early 19th century. She was born in 1815 in New York state, and, died in New York City in 1902.

Educated along with her siblings and learning Latin, French and Greek, she was denied admission to college because she was not a male. As a youngster, long before the Civil War, she wanted to free the slaves in the South. Before she married, young Stanton resolved that she would be keeper of her body and her soul, that no man would control her. Motherhood, Stanton believed, should be as much the woman’s decision as her husband’s. When she married, she struck the term “obey” from her marriage vows. Cady Stanton lived her life as both a suffragette and abolitionist.

In 1848, at the Seneca Falls convention which she inspired, Stanton co-wrote the Declaration of Rights and Sentiments, an early push for equal rights for women. Considered a leading equal rights advocate herself in her time, Stanton allied with suffragettes Susan B. Anthony and Lucy Mott.

“We have to fight hard for our rights,” said Kitcher as Stanton. “Women should have control over our own bodies and lives.”

To learn more about Historic Vienna, Inc., go to www.historicviennainc.org. The community is invited to join HVI and participate in its programs and events.