“I’m not happy when the city is acting as though they are above the law.”

The Capital Bikeshare’s journey into Old Town is off to a bumpy start. While city officials say the Capital Bikeshare has been a success so far, one particular station has incensed local residents who say the city isn’t following its own implementation rules.

Residents say their objection to the South Royal Street Bikeshare station has nothing to do with the bikeshare or bikes in the city, but anger over the city installing a colorful sign without any type of approval or public outreach. The issue started in November 2013 when Deputy Director of Transportation and Transit Carrie Sanders gave a presentation to the Board of Architectural Review about the Capital Bikeshare stations in which Sanders said that she would, at the board’s request, return to give them another presentation before any stations were installed in Old Town.

“I’m happy to come back to the board if there are locations in the historic district,” said Sanders in 2013.

That didn’t happen. Sanders did not return to the BAR before the bike share station was installed. 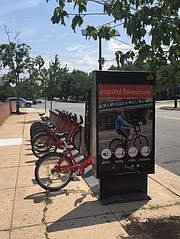 “We would have liked to fulfill that request,” Sanders said, “but it does not violate any regulatory requirement. We provide information to the BAR, but the BAR does not have approval over temporary structures in the public right of way.”

Because the bikeshare stations are not bolted to the ground and could be removed by a truck, they are considered temporary structures and are not subject to BAR approval.

Furman expressed frustration that rules that bind ordinary citizens, like having to seek city approval before operating a business that could draw traffic, don’t seem to apply to the bike share.

“Did the city overstep their bounds?” Furman asked. “Did the city not perform how they were asked to perform? They did not. They gave City Council the illusion a few years ago that all was good and they’d been given BAR approval, when they didn’t … They did not engage local community. They did not follow procedures and go to BAR. I think they fell down on the job.”

Local resident Barbara Beach also works as an attorney and has represented clients before the city for years. Beach says she’s frustrated that the city staff seemed to disregard signage and similar regulations that commercial tenants in the area have to abide by.

“The BAR did not approve this structure, and BAR approval is significant,” said Beach. “This is a multi-colored big sign. We wouldn’t let McDonalds put golden arches in old town, but now we have this five foot sign with bright gold .… Government is not exempt from BAR. All signage except traffic or governmental necessity, like street sign or stop sign, but me approved by the BAR. The bikeshare sign … is not a necessity sign.”

Beach also noted that the bikeshare station is not actually where it was supposed to be when the City Council approved the implementation. The station was supposed to be at the other side of the block near Wilkes Street. Sanders said that various issues can come up during installation that can cause the location of the bikeshare station to be moved; in this case Sanders said it was about giving proper pedestrian clearance on the sidewalk and giving the solar panels on the station more access to sunlight.

According to Sanders, the FY2017 budget included funding to operate 32 Bikeshare stations. 24 stations have currently been installed with eight more being put in over the next few months.

“We’ve seen a successful launch, particularly with the Safetrack work with the Metro,” said Sanders. “There's 105,000 trips starting in Alexandria, a 50 percent increase over the 2014-2015 year, with an average monthly increase of 40 percent.”

While the program is not self sufficient, Sanders noted that few transportation resources are.

Staff will be delivering an update to the BAR about the Bikeshare program at the July 6 meeting.