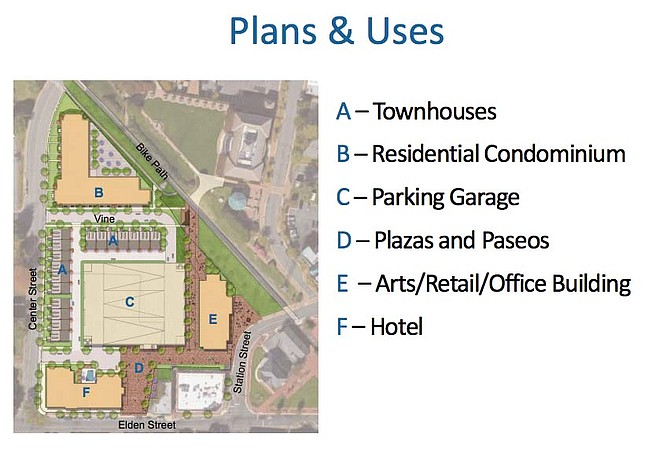 Stout and Teague proposes a mix of condominiums, townhouses, a hotel, and more, as one of the development proposals for Herndon downtown. Courtesy Town of Herndon

Comstock proposes 281 apartments, 18,000 square-foot art space, 17,600 square feet of retail and more, as one of the two development proposals for Herndon downtown.

Herndon Town Council wants to hear from everybody in Town by the end of July.

“We want to hear from as many people as possible,” said Mayor Lisa Merkel.

“If everyone here tells five neighbors I think we will get even more response,” said Councilmember Steve Mitchell. “I’d appreciate that.”

“It’s a lot to digest. It’s 30-plus years in the making we are certainly not going to rush a decision, we’re going to give enough time to hear from all of you,” said Councilmember Grace Han Wolf.

“We want to make sure everyone gets an opportunity to put in your input,” said Councilmember Sheila Olem.

Councilmembers encourage feedback in writing, on the web, by e-mail or by continued testimony.

Another public hearing was scheduled for July 12, 2016, at Council headquarters at 765 Lynn St. in Herndon, after The Connection’s presstime.

THE TWO DEVELOPERS presented their proposals for the redevelopment of 4.675 acres in historic downtown before a full Council Chamber audience on June 8.

high quality apartments and 17,600 square feet of retail with walkways and plazas.

Herndon’s Council voted in May 2015, to purchase 1.67 acres of land in Herndon’s historic downtown from Ashwell, LLC for $3.519 million that added to the three acres of downtown land it already owns.

“The Town of Herndon has been envisioning a comprehensive redevelopment in our downtown for decades,” said Mayor Lisa Merkel, around the time of the purchase. “We made significant strides toward that vision by adopting our Downtown Master Plan,” she said.

The Council is anticipated to select the top proposal in the summer, said Dennis Holste, the Herndon’s economic development manager.

Members of the public who are unable to attend the final public hearing on July 12 may provide comments via the Herndon Downtown Redevelopment Project Comment Form. Details and presentations of the two proposals are available online, as well as a timeline of the RFP process. See www.herndon-va.gov, enter Downtown Redevelopment in search line.