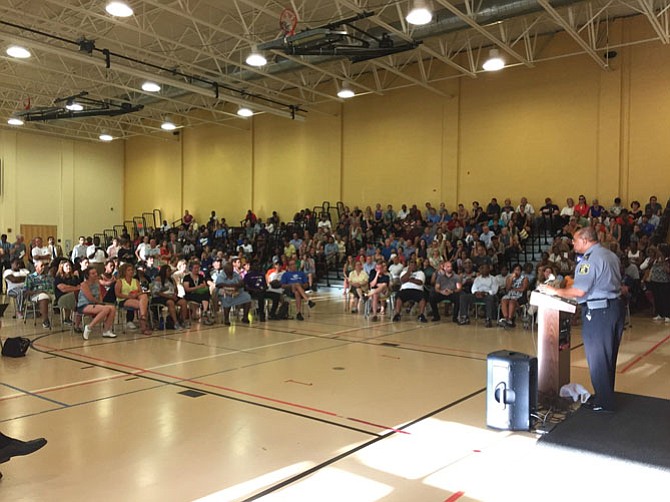 “We’ve busted up the community, scattered, so we can’t come together like [we used to],” said local resident Joyce Rawlings. “We’re still here, but many of our children didn’t make it. We don’t know how to deal with conflict anymore. Nobody’s talking and nobody’s listening. We’ve been to these things before, and you give your suggestions, and then what happens? We go right back to square one and come out and ask all over again ‘what are we going to do?’ Stop looking for someone to solve this for you. It’s about replacing hate and anger with love and compassion.” 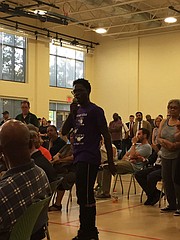 Hadr Kamara argues against a curfew and in favor of greater community involvement.

“This is not random violence, this is targeted,” said Police Chief Earl Cook. “They’re taking to street justice to solve their problems, [but] that is not justice. These people are indiscriminately taking out their personal vendettas on each other.”

For the third time in the last year, police held a meeting in the gymnasium at the Charles Houston Recreation Center to discuss the latest murder with the community. In the July 6 meeting, many of the local residents recognized that previous calls for unity hadn’t stopped violence in the neighborhood.

“Their blood is crying from the streets,” said Patrice Hall. “When will the violence stop? … When are we going to step forward and question our children? Does it have to be your daughter before you speak up? Does it take us [dying] before they speak up? We have to take back our neighborhood.”

Patrice Hall addressed the audience, pleading for anyone who knew anything about the crime to talk to the police, even if the information is sent anonymously.

“We are in a state of emergency,” said Patrice Hall. “There’s another [murder in the works] ... Another black male will be executed. We need to stop this assassination or it’s going to go on through the summer. There’s going to be another one here, and if you are not part of the solution, you are a part of that problem. Someone in here knows something … If you know something and you haven’t told the police, you killed my son just as much as the trigger man.”

Local residents who spoke at the meeting said that public safety measures in the Braddock Road Metro area had been poorly implemented. Deborah Wilson said she’d been trying since 2004 to get lighting in that part of the neighborhood and to make the enclosed area around the generator less appealing to those looking to conduct criminal activity. Wilson brought a folder with all of her letters and emails to local officials, none of which had any effect until Hall was murdered in that exact spot.

Mayor Allison Silberberg told family, friends, and neighbors after Alexandria’s fourth homicide of 2016 that Alexandria is a safe city. But in a neighborhood that has experienced four homicides in the last year, many residents are beginning to feel trapped in a cycle of violence. The sense that the city hasn’t been listening to the needs of the local neighborhood was prevalent throughout the meeting. Leslie Zupan, president of the West Old Town Citizen’s Association, said criminals come into the Braddock Road neighborhood from neighboring jurisdictions because “The city has no community policing,” said Zupan. “It’s drawn a big bullseye around this neighborhood.”

Cook disputed this image, citing the work of the Community Oriented Policing Unit (COPs), the frequent patrols, and the presence of a police officer living in the affordable housing. But the community said some of the measures, particularly the frequent patrols, don’t work as well on the streets as the higher echelons of the administration believe. Robin Paulin said many walk by and see the officers just sitting in their cars.

When one speaker said they often see squad cars clustered together at the local Post Office, the audience erupted in a roar of agreement. Cook defended his officers, saying that they’re human just like anyone working a job, and are entitled to take an occasional break.

As local civic leaders urged the community to come together, divides in the audience were visible. When Patrice Hall said that the community needed more programs for city youths, a white woman in the audience asked who would pay for those programs. The black woman in front of her turned around and the two began a heated confrontation that volunteers had to be called over to break up.

A woman from a nearby neighborhood spoke and proposed a curfew on the youth in the Braddock Road metro neighborhood. After she sat down, Hadr Kamara stood and addressed her and the audience. Kamara is a 15-year-old black youth and ran through the list of his involvement in local organizations.

Among the audience, both at this meeting and previous ones, many of the local residents felt greater community programs that give the youth productive activities could help steer them away from a life of crime that eventually leads to violent behavior.

“We keep talking about curfews for the children, we need to get some curfew for the adults,” said Rawlings. “We have to stop this madness. We’re not going to change it until we say, ‘I’m just like you. I’ve got that same pain.’”