Alexandria: Dropping Off 320 Pounds of Drugs 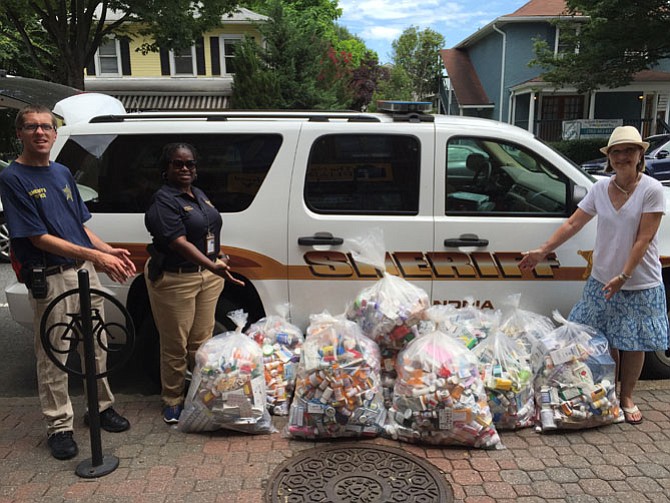 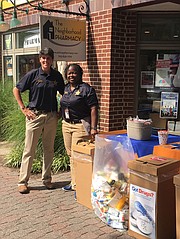 In front of the Neighborhood Pharmacy of Del Ray, Captain Robyn Nichols and Deputy Valarie Wright collect medication at the Del Ray Drug Take Back event on Saturday July 16, from 10 a.m. to 2 p.m. 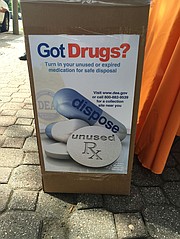 The deputies accepted all medication, but rejected needles and syringes.

In front of the Neighborhood Pharmacy of Del Ray, residents dropped medication into large clear trash liners within cardboard bins from 10 a.m. to 2 p.m. on Saturday, July 16.

The pharmacy partnered with the Substance Abuse Prevention Coalition of Alexandria and the Sheriff’s office to hold a “Drug Take Back,” an event where the Sheriff’s deputies collect unwanted or expired prescription drugs and other medications.

Captain Robyn Nichols said that the Take Back event benefits the community and that many residents feel relieved to get unwanted medication out of their possession. “Back in April, somebody turned in drugs from the ‘70s,” she said.

Shelly Morgan, vice chair of the SAPCA, advised residents not to dispose of prescription medication themselves. Flushing the medication may add drug residue to the water system, and drugs that are thrown in the trash can be stolen and abused. Morgan suggested that residents save their medication in a safe, secure place and drop it off at a local Take Back event, where the medication is disposed of safely.

Morgan said that the SAPCA has been lobbying to get a metal “drop-off” box placed at the Sheriff’s office. The box would be a “safe place” for residents to drop off unwanted medication so that they don’t have to wait for Take Back events.

The company Covanta incinerates the drugs at a site with DEA supervision.

Morgan also said that though she has been asked many times if unused drugs can somehow be recycled, no pharmacy that she knows of will take unused medication.