Serving up ways to provide food.

Second in a two-part series on childhood hunger in Alexandria.

“When you look at the big picture of childhood hunger in Alexandria, you almost don't want to tackle it," said Melanie Gray, director of Outreach and Mission at Historic Christ Church in Alexandria. "So we take it one piece at a time."

Gray is the convener of Hunger Free Alexandria, a consortium of 30 local community leaders, churches, and non-profit organizations who meet monthly to strategize on hunger. The group was launched in 2014 after a report prepared for the Alexandria Childhood Obesity Action Network (A-COAN) about food access problems in the city.

"The report was a springboard to action,” Gray said. She says lack of information is still a major issue but when people become aware and they are asked to help, they are very willing to assist.

Deborah Warren, director of the Center for Children and Families in the Alexandria Department of Community and Human Services added, “No matter how much we communicate there is so much more to be done. And,” she said, “whose job is it? There is no single hunger czar in Alexandria whose job is to address childhood hunger in the city.” 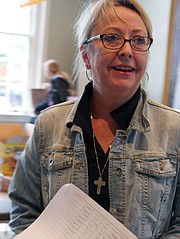 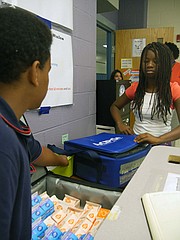 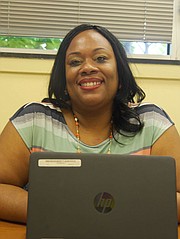 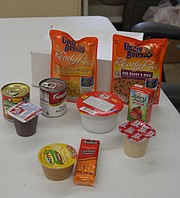 Sample Blessings in a Backpack (BIB) assembled and stored at ALIVE! warehouse for pick up and delivery to three public schools currently participating in the program. 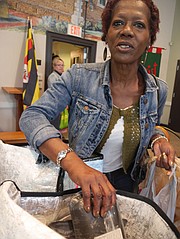 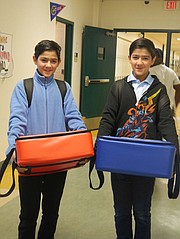 A patchwork of programs, funding sources and solutions currently exists, often uncoordinated and overlapping. But Warren points out a lot of progress has been made in the last several years.

“A few years ago we weren’t even aware hunger existed in Alexandria,” Warren said. The city’s first Children and Youth Master Plan was adopted by the City Council in June 2014 and by the ACPS School Board in May 2014. “It’s a big deal.” It establishes long-term, community-wide priorities for youth as well as the specific action steps necessary to realize those priorities. Number one goal: “each child will be physically safe and healthy.”

Warren said, “The plan doesn’t call out hunger but coordinates efforts across agencies to develop a systems approach for solving problems for youth.”

BREAKFAST-IN-THE-CLASSROOM (BIC) is a universal breakfast program currently offered at Cora Kelly Elementary, Patrick Henry Elementary, William Ramsay Elementary and was initiated at Francis C. Hammond Middle School in the spring of 2016. Although funding for the food is provided by the Federal government, many schools have start-up obstacles due to inadequate infrastructure needed to support the program. For instance, at Hammond, according to Greg Tardieu, grants officer for Alexandria Public Schools, a school that was built for 800 students now houses 1,400. There was inadequate storage and cooling areas to support the existing lunch and breakfast programs. Expanding even further to provide universal breakfast was impossible with the facilities available. As a result, Tardieu interested Wal-Mart, and Hammond received a $149,000 grant to construct an exterior walk-in freezer and retrofit the cooler, doubling the capacity of the freezer and eliminating the chaos of food delivery 2-3 times a day. In addition Mid-Atlantic Dairy donated $10,000 for 90 thermal bags so that more youths could have access to milk.

Low and Reduced Price Breakfast is offered in all public schools for eligible students. However, there are obstacles to participation that have been solved by the Breakfast-in-the-Classroom program where all students receive breakfast. Michael Routhouska, principal of William Ramsay Elementary School, says the idea is to assure that more children eat breakfast. Routhouska says the breakfast is served in the classroom where all of the students can eat together and socialize with their friends instead of in the cafeteria where eligible students feel stigmatized. "We expect everybody will eat. It is a great community builder like breaking bread with anybody and there is no longer a stigma attached," he said.

Pierrette Hall, principal at Hammond, says five cafeteria staff load 90 thermal bags each morning. They are stacked on carts and are delivered to the classrooms by "breakfast ambassadors." She explains the ambassadors are youngsters with a leadership role, and “they are very excited." This day the blue bag is zipped open to reveal cinnamon Golden Graham cereal and the red bag piled high with cartons of milk and orange juice. By 8:30 a.m. breakfast is over and class ready to begin.

A seventh grade student in the International Academy at Hammond said said, “If you don’t eat, you don’t think about things. If you are less hungry, you work more.”

FREE AND REDUCED PRICE LUNCHES are easier "because they don't have the stigma attached,” according to Isabel Pérez, Hammond site coordinator for Communities in Schools of NOVA. She explains there is nothing to single the children out. Each child has the same choices and a lunch code with money in their account and no one knows whether it is from a parent or from Federal funding.

The schedule for lunches for hungry children can be a challenge but one with solutions. Due to the large number of students and lack of cafeteria space, students often eat in shifts. Carolyn Hemingway who serves school lunch at Ramsay said, "They love it all today — the chicken patties, cheeseburger, popcorn chicken and peanut butter and jelly pockets."

At Ramsay, lunch begins at 10 a.m. Routhouska has solved the problem of early lunch by giving early lunch students an afternoon snack and those in extended day get another limited lunch.

Hall says they are looking at the super snack idea for Hammond next year. "By the time 2 p.m. comes, they are hungry."

THE BLESSINGS IN A BACKPACK (BIB) program is another food supplement program, this one supported by private fundraising. Three schools out of 16 public schools offer this program. The backpack includes non-perishable breakfast, lunch and dinner items and snacks for the weekend for 50 of the neediest students identified by the school.

Charlotte Martinsson, Chair of the ALIVE! Food Program, says the school backpacks are meant to be a supplement not a replacement for meals. She explains they are not necessarily the food pyramid but the best they can do. She said ALIVE! supplements what the schools provide with food donated by the community if they have extra.

Pérez said, “One of the challenges of the BIB program is to get food into kids' hands. Stigma is an absolute challenge.” She added, "We definitely have to rethink — is it so anxiety driven — they say they don't need the food when we know they do. Also this program doesn't consider the cultural aspect that the parents think they should bring home the food and for the child to bring food instead is difficult for them." In addition, she says these backpacks of food are heavy and they are thinking about alternatives like a drop-off location.

Perez says ALIVE! agreed to be the hub for food distribution for this program. But ALIVE! doesn’t manage the program. She explains it takes a strong liaison coordinator, usually a parent, to make BIB work for a school. Someone has to pick up the food, deliver it to the school and act as a liaison between social services, the school and ALIVE!.

THE SUMMER FEEDING PROGRAM offers free meals to children during the summer break. There are 14 sites at recreation centers, most open f through Aug. 19 and 15 sites at schools, open on a varied schedule. [See map in the June 8 Gazette Packet for full details.]

Tardieu says sites like the Seminary Road high rise live in an island across busy roads and children can’t walk from there to the school for meals. Another obstacle is lack of knowledge about the availability and eligibility for this program. Unlike the school year, all meals are free for anyone 18 years of age or younger. The child does not have to be registered in summer school or a recreation program, but transportation is only provided for children attending summer school. Tardieu says his dream in five years is to have “lunch bus cafes” that drive around to sites and deliver food to children who can’t get to the summer feeding sites.

A NUMBER OF LOCAL CHURCHES provide assistance with Meade Memorial serving daily lunch, Old Presbyterian Meeting House a sit-down breakfast and with St. Paul's Episcopal Church open in the morning on Tuesdays and Historic Christ Church on Thursdays for food distribution. A list of local food resources can be found at hungerfreealexandria.com under Resources.

Gray says that Christ Church depends on volunteers and “We never know how many we will have. We preorder our staples and drive to Lorton every Thursday to get our supplies from the Capitol Area Food Bank.”

Gray says about 10 percent are homeless but the others are “precariously housed. They live on the edge.” Gray says this the only pantry that offers fresh meat, produce, cheese, eggs and bread every week. "It's a pop-up store for grocery shopping."

Sheila Frazier has come to pack plastic bags with fresh swiss chard, hamburger patties, a carton of strawberries and bread donated by Panera for her six children who also receive free breakfast and lunch at school.

Raymond Ellis has come to pick up groceries for his family of four on his way to dialysis. While people wait their turn to shop, health screening is offered.

Gray said, "We also have cooking demos to show the clients how to use what was donated that week. This week it is roasted vegetable pasta but last winter they got tons of deer meat donated so we came up with recipes for venison."

Gray acknowledged childhood hunger is a major issue but despite the obstacles, the will is there among a number of organizations. She added “We keep chipping away; we’re more and more getting connected. And this allows us to move forward.”

For information on services or how to volunteer: