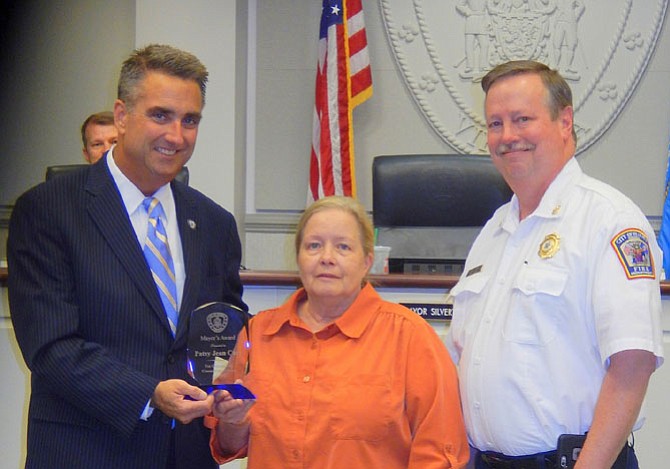 (From left) Chris Hershey receives his award from Scott Silverthorne.

Carr received her award for Outstanding Community Service because of her actions to rouse her neighbors from sleep during a fire in their apartment building on Mosby Woods Drive. The blaze took the life of a 74-year-old man who’d been smoking in his bedroom, where the fire started, but everyone else was able to escape unharmed.

“In the early morning hours of June 7, Patsy heard the smoke detector in her apartment unit go off,” said Silverthorne. “She then alerted all the neighbors and limited the spread of the fire.”

Addressing Carr directly, he said, “You saved lives. You went around to every unit, pounding on doors, waking people up and allowing them to get out safely.”

Joining the award presentation, Fire Chief John O’Neal told her, “What you did was heroic and we thank you for your actions.”

Chris Hershey was given the Public Service award. “He’s a friend of mine and is from the City,” said Silverthorne. “He’s our town historian and has been involved in a lot of aspects of City life. For example, he’s been involved with the Fairfax Public Library and supports the Little League and events such as Rock the Block.”

Although Carr didn’t address the audience after receiving her award, Hershey did. “I love our city and its small-town feel,” he said. “Once you live here, you don’t want to leave.”