Great Falls: Community Encouraged to Get Involved in Land Use Cases
Votes

Great Falls: Community Encouraged to Get Involved in Land Use Cases 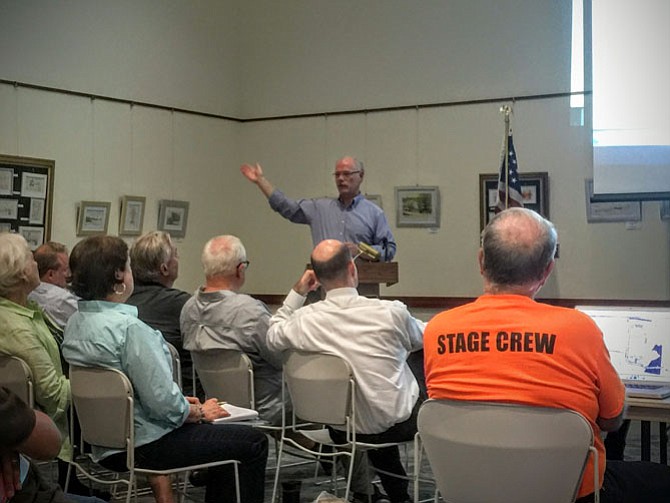 Bill Canis, president of Great Falls Citizens Association, urged the 50 people who attended a Great Falls Citizens Association Town Hall meeting Monday, July 18 to get involved on three land use cases before the Planning Commission and Board of Supervisors. He told membership that GFCA has initiated a stormwater management task force. Photo by Ken Moore.

Now is the time to get involved.

“Anyone who wants to express an opinion on this property and hasn’t done so yet, your time is running out,” said Bill Canis, Great Falls Citizens Association president.

The application to develop 51.97 acres of Brooks Farm into 19 homes is scheduled for a public hearing to be heard by the Board of Supervisors on Tuesday, July 26. The Planning Commission earlier this month recommended approval of the application.

“We don’t want to get five years down the road seeing Walker Lake all silted up,” he said. “We have to get it right folks. Stormwater is really important on this property.”

GFCA continues to oppose the redevelopment proposal, despite many efforts Basheer/Edgemoor-Brooks has taken to respond to community feedback. The developer has made 12 changes to the original application because of community advocacy, said Canis.

Great Falls, because of its location and environmental assets, like Potomac, Maryland, has a responsibility not only to the community, to the county, but also to the Potomac River watershed area and the Chesapeake Bay, and to protect the quality of the region’s drinking water.

“I do want to commend this community,” said Canis, “because in evaluating this property, thousands of hours of volunteer time has gone into this. No one has paid for that.”

“I’m very proud to think that we have citizens in this town who say, ‘You know, I think we can do better than what’s proposed.’ That’s why we have had 12 proposals. Think if the first proposal was approved without that feedback,” Canis said.

He encouraged membership to get involved.

GFCA held a Town Meeting Monday, July 18 to give updates on three major land use cases before the Planning Commission and Board of Supervisors.

More than 50 people attended the meeting, which lasted more than 150 minutes, almost an hour after the Great Falls Library closing hour.

“These development plans are placed on a shelf in the library,” said Canis.

“Anytime there is a change, the developer is asked to update it,” he said. “All of you in this room can be well-informed.”

THE PLANNING COMMISSION is also scheduled to hear the case involving Hill Nursery on July 21.

GFCA member Sam Cappiello told members of the GFCA that he has hired his own private arborist, at his cost, to conduct a study of the trees he believes will be removed by the Gulick Group application.

“They will be clear cutting about seven acres,” said Vickers.

GFCA members asked if they could support him. GFCA officials encouraged members to give the Planning Commission and Board of Supervisors their feedback.

Cappiello and his wife Sandy Cappiello and GFCA member Arthur Kingdom and Eric Knudsen did testify before the commission to describe sunlight shining through hundreds of trees on Challedon Drive, and the birds singing at sunrise.

“I hope members of this commission have had a chance to visit the forest in question,” said Kingdom.

“It is idyllic,” he told the Fairfax County Planning Board Commission.

The Gulick Group applied to rezone the 11-acre property from R-A to R-1 in order to permit development of a 10-lot cluster single family subdivision at a density of 0.91 dwelling units per acre. The area is currently undeveloped, forested, 11-acre parcel that is composed of moderate slopes that steepen towards the Piney Run floodplain.

Dranesville Planning Commissioner John Ulfelder deferred the decision to July 21, 2016 to give Great Falls Citizens Association and Gulick Group an opportunity to further fine-tune details of the potential development; and to keep the public record open for additional feedback.

A CVS PHARMACY and drive-through at the confluence of Route 7, Great Seneca, and Georgetown Pike has also been proposed.

The Planning Commission has currently scheduled a public hearing in that case for Oct. 29.

“I urge everybody to come to the [GFCA] Traffic Committee meeting in September,” said Knudsen.