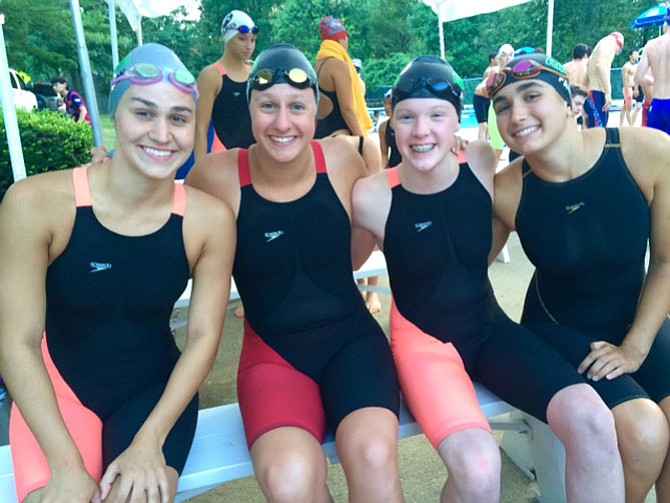 The Virginia Run Riptide achieved two victories during the fourth week of the NVSL summer season with a win at Wednesday’s Divisional Relay Carnival and a hard-fought win of 232 to 188 over the Cottontail Cobias on Saturday.

Not only did the Riptide capture the Division 4 relay trophy, they sent four teams to the NVSL All-Star Relays on July 20. Three relay teams set new team records. The 8 & Under girls Caroline Friess, Jenna Van Buren, Charis Roundtree, and Anna Kelliher swam to a record of 1:38.09 for the 100 medley relay. The 15-18 boys 200 medley relay of Geoffrey Eisenhart, Leo Wang, Patrick Kearney, and Nick McGrath broke their own record with a swim of 1:56.50. The 15-18 girls relay team of Mia Newkirk, Sarah Boyle, Didi Pace, and Chloe Hicks obliterated the team medley record with a 2:04.37 and slashed the freestyle record with a 1:53.12.

The 11-12 girls medley relay of Alana Turflinger, Gabriella Borsato, Maddie Whitton, and Isabella Cogan, the 15-18 boys medley and the 15-18 girl’s medley and freestyle relay teams qualified to swim in the NVSL All-Star Relays.

As the fliers took to their starting positions, the Riptide led 139-131. Once again the energetic 8 and under boys swept their event, with Nicholas Harris first, Ewan McDonough second and Tyler Dahm third. The talented 8 and under girls answered with Charis Roundtree flying to first and Caroline Freiss taking third. The 9-10 boys also took first and third with Davis Collinsworth and William Whitton. Neha Srinivasan (9-10 G) swam to a new best time and captured second in her heat, while Andrew Boyle (11-12 B) stayed strong to finish third. For the 11-12 girls Maddie Whitton was first and Isabelle Cogan third, and for the 13-14 girls Catie Gunn swam to first and Becca Matthews for third. Anthony Arcomona (13-14 B), Leo Wang (15-18 B) and Didi Pace (15-18 G) were dominant in winning their races.

Moving into the relay portion of the meet the Tide had widened their lead to 192-168. Needing four relays to secure a win, the Riptide swam with enthusiasm and won 8 of 12 contested races.

The Riptide will be conducting a Lap-a-thon this week to benefit Brain Injury Services of Northern Virginia (braininjurysvcs.org) and invites everyone in its Western Fairfax County community to support this local agency named “Nonprofit of the Year” in 2014 by the Fairfax Chamber of Commerce.