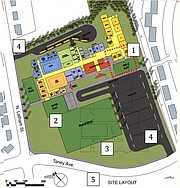 “They say until they do serious cost analysis, they’re not comfortable totally making that conclusion and that’s why I’m not comfortable basing my decision on a cost difference of $1.5 or 2 million out of a $40 million project.” 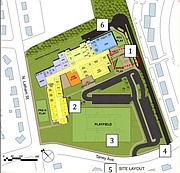 “If we wait for specific numbers, we will take the project off the timeline.”

A few weeks ago, it seemed almost certain that the controversy over Patrick Henry Elementary School had been settled. The School Board-appointed Patrick Henry Advisory Group selected option C1, which seemed to balance the desires of the community and the needs of the school. Mainly, the controversial bus entrance and exit from the narrow, residential N. Latham Street had been moved down to Taney Avenue. But once the decision reached the School Board, things changed rapidly. At its May 19 meeting, the School Board members were receiving last minute updates from staff while on the dais, and new information about the costs of A1 vs C1 began to sway opinion against the advisory group’s preferred choice. Ultimately, the School Board voted 6 to 2 in favor of option A1.

Staff and members of the School Board preferred option A1 as a less expensive alternative. Staff estimated that, with various differences in design elements, option A1 would cost between $1.5 and 2 million less than option C1. But Superintendent Alvin Crawley said he couldn’t be certain there wouldn’t be cost changes that would make option A1 ultimately more expensive than C1. The total building cost is estimated to be around $40 million, but this early in the process, Crawley said that concrete numbers on the building cost were not available.

“I’m not comfortable assuring the board there won’t be variability in cost,” said Crawley. “There are always unforeseen circumstances, particularly when you move into a construction phase.”

This answer was unacceptable to some members of the School Board.

“They say until they do serious cost analysis, they’re not comfortable totally making that conclusion,” said School Board member Margaret Lorber, “and that’s why I’m not comfortable basing my decision on a cost difference of $1.5 or 2 million out of a $40 million project.”

Some on the School Board were unhappy with the way the process had worked out, even among those who ultimately supported A1. Even as the meeting was starting, new information was being given to School Board members about the project.

“I’m disappointed once again to get information like this on the dais,” said School Board member Ronnie Campbell, who ultimately voted in favor of the project. “If it’s this important, get it to us the day before. It happens, but we always seem to get information at the last minute. It’s very frustrating. I can’t even imagine how the new board members feel having not been through this before.”

School Board Vice Chair Christopher Lewis also sat on the advisory group, and said after the meeting that new information on the cost differences between C1 and A1 helped cement A1 as his preferred option.

“We got information on costs that the advisory group didn’t have, and that’s very important,” said Lewis. “That was the number one thing for me.”

Lewis said that, while he hadn’t been given a set school cost estimate by staff, their reasoning behind the cost differences was convincing.

“I feel comfortable [with that vote] given that it’s the best with the information available,” said Lewis. “If we wait for specific numbers, we will take the project off the timeline.”

That project timeline sets opening of the new Patrick Henry School for fall of 2018 if the construction phase experiences no delays. Every phase of development up until this point has experienced delays, with the project already having been delayed a year once before. School Board member Cindy Anderson, who like Lorber voted against the School Board’s choice of A1, said that it seemed unlikely construction would be the only phase that wouldn’t have delays, so the School Board should not rush into a decision to meet that deadline.

“Overly optimistic to think the remaining part of the project will be the only one that doesn’t experience delays,” said Anderson, who like Lorber said she was uncomfortable being pushed into a decision without any concrete details. “During the past few months, I expected the decision-making process to become clear as it moved on, but that didn’t happen. This is a very important phase of the project and it’s been rushed with an unsatisfactory public engagement process…. The advisory committee process seemed truncated and advice got lost. I understand it is an iterative process but [we’re] being asked to vote on the design of a $40 million expenditure that will change this neighborhood for a generation and many to come.”

But Lewis said the School Board should still do everything it can to meet that 2018 goal.

“Everyone would prefer fall of 2018, like we’d planned,” said Lewis. “If we have an opportunity to catch up with the slight delay that we have in the schedule, that’s what’s best for the kids. If we can avoid moving that start date for the kids in 2018, that’s what we should do.”

Like Anderson and Lorber, Biegel found it upsetting that the School Board voted for a cheaper option without being given a chance to look at the full price tags for each design.

“The School Board's decision seems to have been based on estimated costs related to the footprint of C1,” said Biegel. “I believe that those costs are being given undue weight at this early design stage given that we have seen no concrete figures. All plans under consideration should absolutely be required to be constructible within budget, but we have not yet seen a total project cost comparison for either option. Without a full line-by-line comparison between the site plans, it is premature and perhaps misleading to rank the two against each other in terms of overall project cost.”