Lost but not forgotten. 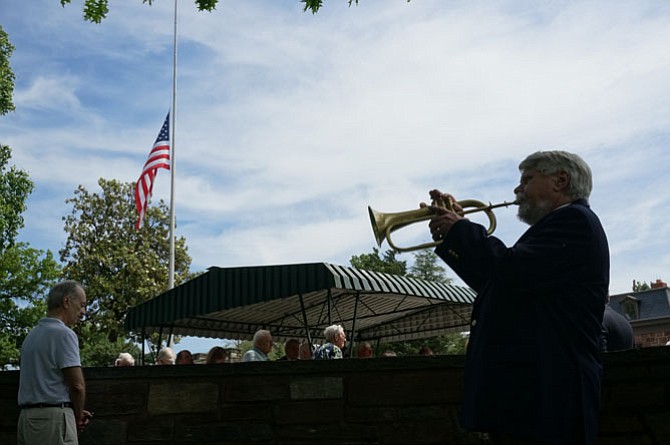 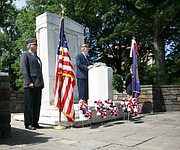 Commander Jim Glassman receives a certificate of appreciation for his work on veterans issues from William S. Brunner. 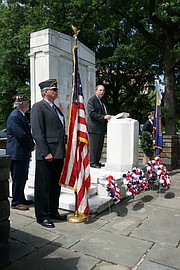 There’s some laughter and chatting around the American Legion headquarters under Gatsby’s Tavern, but a heavy mood still weighs over the room. While many Alexandrians barbecue and celebrate a Monday off of work, for the veterans in the club, May 30 has a more personal meaning. It’s Memorial Day, and most in the room just arrived from Alexandria National Cemetery, where they placed flowers and wreaths at the graves of comrades who’d fought in America’s wars.

“These guys gave their lives for us,” said James Glassman, commander of Alexandria’s American Legion Post 24. “Every gravestone tells a story. It’s up to us to pass those stories down from generation to generation so they live forever.”

“I get chills every time I come here,” said Scott Brunner. “There are 4,300 graves here, and they still do interments every week.”

Brunner said he was going through the cemetery on Saturday when he came across a tombstone for an unknown soldier and, while he’s seen several of them before, he felt particularly impacted by this one.

“They’re not unknown,” said Brunner. “They are American. They’re you and I.”

A theme of the ceremony centered around the soldiers not buried at the cemetery, those who went missing in action and were never recovered: 83,000 American soldiers remain missing in action, 73,500 of them from World War II.

At the ceremony in Alexandria National Cemetery, Jack Kull represented the Defense Prisoner of War / Missing Personnel Office, and spoke about the challenges the office continues to face recovering the remains of soldiers who’ve gone missing in action. Each conflict, Kull noted, presents its own challenge. For WWII, documentation is deteriorating and witnesses to disappearances are dying. For the Korean War, most remains are north of the demilitarized zone, while in Vietnam acidic soil and local wildlife mean many remains have become scattered or disintegrated.

“When we find remains in Southeast Asia,” said Kull, “sometimes they come home in the palms of our hands.”

The ceremony was also the last hosted by Glassman. For three years, Glassman has been the commander of Post 24, but the ceremony was the last public occasion he’ll officiate before he retires from the job. For Glassman, it’s been a long journey since he got back to the United States in 1970. Glassman arrived in San Francisco and said he was spit on as he walked down the street in his uniform, and that the Veterans of Foreign Wars (VFW) wouldn’t take Vietnam Veterans at the time because it wasn’t technically considered a war. Since then, however, most of the leadership of the American Legion and the VFW has been passed on to Vietnam veterans, who now face a new challenge: recruiting young veterans fresh out of Iraq and Afghanistan.

This hasn’t been an issue for Glassman, who said the post has 250 registered Iraq and Afghanistan veterans. Glassman said a big part of this comes from getting young people quickly involved in volunteer work. Too often, Glassman says the American Legion is seen as just a bar where veterans hang out, but he says the real mission is volunteer work and service.

“I didn’t expect the amount of help I got with this job,” said Glassman. “In some posts, you get three or four people come out. Here, we get between 30 to 50 people for each event.”

Glassman particularly remembered last winter, when 84 of the legionnaires volunteered to ring bells for the Salvation Army in the freezing cold, ultimately raising $8,000 for charity.

“It has its ups and downs, but you really feel like you make a difference,” said Glassman. “It’s been an honor. We have a good group of volunteers. That makes it easier.”