Generals advance to region semifinals with win over Cougars. 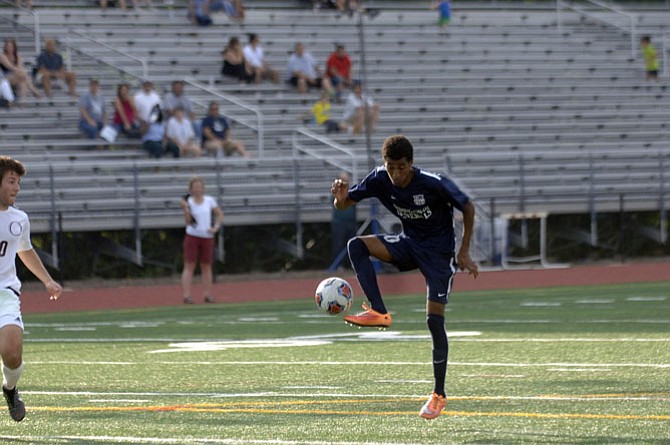 Washington-Lee’s Benhur Gebretnsaie scored a goal against Oakton during the Generals’ 2-1 win on May 26. Photo by Craig Sterbutzel.

Lucas Mendes and the Washington-Lee boys’ soccer team defeated Oakton in the 6A North region quarterfinals on May 26.

With a trip to the region semifinals on the line, the undefeated Oakton boys’ soccer team came in looking to remain hot. Washington-Lee had other ideas.

A key second half goal from Generals senior midfielder Benhur Gebretnsaie at the 65-minute mark propelled them to a 2-1 victory over the Cougars on May 26 at Oakton High School.

The Washington-Lee senior wasn’t concerned with Oakton’s undefeated record after the game.

“Before the game, coach [Jimmy Carrasquillo] was telling us, make sure this isn’t our last game,” said Gebretnsaie. “We started a new formation today and I think it worked the entire game.”

That new formation was successful, as early on the Generals were applying all the pressure. The attack was headed by forward Maycol Nunez, along with the Virginia Gatorade player of the year Lucas Mendes.

“They’re just dynamic,” said Washington-Lee assistant head coach Christopher Daggett-Rowzee. “They make things happen and their skill level is amazing, so they create chances for everybody. When they can take on people and make the defense move a little bit more than they want, it gives opportunities for anyone that’s in the box.”

The game consisted of strong play from both Cougars goalkeeper Jonny Silver and Generals goalkeeper Julian Esquer-Perez, keeping the game scoreless in the first half. After that, the Generals were able to open up the scoring when a corner kick from Harrison Ramos that was headed in by senior defenseman Noah Goodkind, who jumped up on the play at minute 57 to make the score 1-0.

Then, eight minutes later, Gebretnsaie capitalized on a deflected ball after a shot from Mendes to pad the lead to 2-0 in favor of Washington-Lee.

For the Cougars, head coach Todd Spitalny thought they had great chances to put the ball in the net.

“We had some very good chances to put away and we just didn’t,” said Spitalny. “The issue is both of their goals came from us trying to do something we shouldn’t have done. A simple trap and a play, and we’re out of it. Instead, an unnecessary trap, they counter back and score.”

Maycol Nunez and the Washington-Lee boys’ soccer team will host Langley on June 1 in the 6A North region semifinals.

Oakton did have plenty of chances to get on the board in the second half. One chance was put wide by Trey Lodge, which was followed by another Cougar chance which was knocked wide again by midfielder Carson Khadka.

Despite the loss, Spitalny gave credit to Carrasquillo’s Generals.

“They’re a great team, we knew that coming in,” said Spitalny. “You have to protect yourself on the backend, and unfortunately, we ran out of legs toward the end.”

A couple of injuries did leave the Cougars shorthanded down the stretch, as a couple of players had to play with lingering injuries in the game including Nick Carrigan and Tyler Morgan.

Oakton was able to add a goal by Morgan at the 79th minute. Oakton finished with a record of 15-1-1 to end a great season.

“The loss doesn’t define us,” Spitalny told his team after the game. “The family doesn’t end with the final whistle, we still fight together and we still play together. Tonight, we just came up short.”

As for Washington-Lee (14-1-2), the Generals will host Langley at 6 p.m. tonight in the semifinals after the Saxons defeated Lake Braddock.

“We just have to come in with this same attitude next week,” said Gebretnsaie. “This was probably our toughest matchup all year and next week will be just as tough.”