Fairfax City: In Gratitude and Remembrance 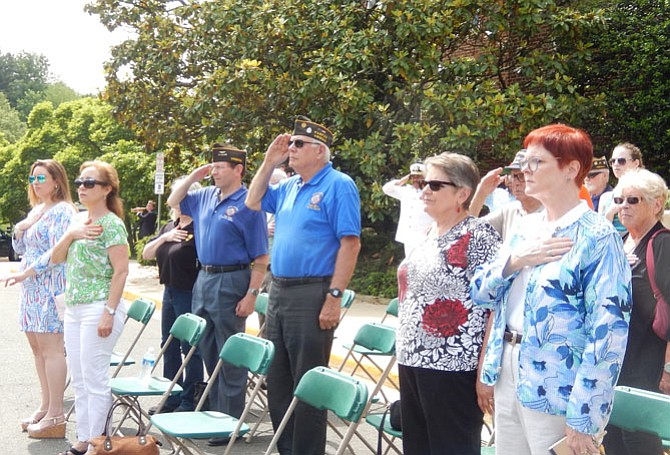 Residents and veterans stand at attention while bugler Hank Roeder plays “Taps” in the background. Photo by Bonnie Hobbs. 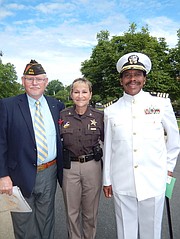 Bob Kennedy (center) rings the bell after each fallen veteran’s name is read.

To some people, Memorial Day is for mattress sales and barbecues. But its real purpose is to honor America’s veterans.

And on Monday morning, May 30, local residents, veterans and dignitaries gathered in front of Fairfax City Hall to do just that. Hosting the annual Memorial Day service were American Legion Post 177 and Veterans of Foreign Wars Post 8469.

The ceremony began with the presentation of the colors and the singing of the national anthem. Then Chaplain Don Northcutt gave the invocation.

“We return today to honor those who served our country and gave their lives so we may continue to enjoy the gift of freedom,” he said. “But we must also carry their love, honor and beauty forward to future generations. They must know what [our veterans] did and why.”

Army veteran Aaron Coffin, commander of Post 8469, said Memorial Day is both a somber occasion and a time to celebrate those who came before. Stressing that America’s military veterans who died in wars kept their country and its citizens free, he said, “We owe them our gratitude and remembrance. So on this day, celebrate and remember, but be happy.”

Veteran Jeff White, commander of American Legion Post 177, explained the flag guidelines for Memorial Day. “The flag is flown at half-staff until noon, in remembrance,” he said. “After that, it goes all the way up, in affirmation of our self-governance. Happy Memorial Day.”

Coming to the podium next was City Councilman David Meyer. “Today is a solemn, federal holiday,” he said. “It’s a time when we pause and reflect on those who – to quote Abraham Lincoln – ‘gave their last, full measure of devotion. We remember those who redeemed liberty with the ultimate payment.”

Del. David Bulova (D-37) said how proud he was to be the grandson and son of military veterans. One of his grandfathers served in the Marines and the other served in the Army. He also noted that his father is a Vietnam veteran. So, said Bulova, “I’m eternally grateful and honored to be here to pay respect to [all veterans].”

Sen. Chap Petersen (D-34) said he’s especially proud to be an American “because of the way we’ve treated our enemies after a war and helped them get back on their feet.” For example, he said, in the cases of both Japan and Germany, “We helped them become democracies and allies.”

Mentioning his own family, Petersen said that “150 years ago, my great-great-grandfather fought for the [Confederate] Army of Northern Virginia and his son later became a congressman.” Similarly, he said, “The legacy of the people who served [this country] made America and the world a better place.”

Some of the participants in Monday’s Memorial Day ceremony in Fairfax.

The next speaker was City Councilman Michael DeMarco, who urged those attending the ceremony not to forget service members’ husbands, wives, parents and children. “As we celebrate as a nation and help our veterans come back from war and get re-acclimated back into society, we must remember the families of those who’ve lost loved ones and are suffering,” he said.

“It’s important that we continue to celebrate those who’ve made the ultimate sacrifice for our freedom,” added Fairfax County Sheriff Stacey Kincaid. And to U.S veterans and military personnel everywhere, she said, “Thank you all for what you do.”

THEN CAME the reading of the names of the Fairfax Honor Roll – Fairfax County and City of Fairfax residents who died in wars, serving their country. The names were read in alphabetical order for each war. Coffin started things off with Thomas L. Brady and James F. Carper, both of whom died in World War I. And after each name was said, Bob Kennedy of VFW Post 8469, struck a bell belonging to the Navy in World War II.

Then other people took turns reading a long list of names through each succeeding war, through to the War on Terrorism, from 2001-present day. Anastasia Leffas, who belongs to an American Heritage Girls troop, read names including Clifton’s Canfield J. “Bud” Boone, who died at the Pentagon on 9/11.

Also honored was Army 1st Lt. Jeff. Kaylor, a Centreville High grad and newlywed who died in Operation Iraqi Freedom. Just 24, he was on reconnaissance when he was killed in a grenade attack outside Baghdad on April 7, 2003.

Before Hank Roeder closed the ceremony by performing “Taps” on his bugle, Northcutt, also of Post 8469, gave the benediction. He read a Facebook entry written last Friday by Army Sgt. Mary Dague, a former explosive ordinance disposal [bomb] technician who lost both of her arms in Iraq. 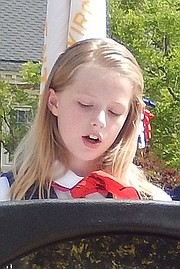 “I used to get upset at the barbecues, people thanking the troops for their service and the general American population not understanding the true meaning of Memorial Day,” she wrote. “But not anymore. Not because I’ve stopped remembering the fallen, but because I never forget them.”

Dague lost nine close friends to war. “But there are others who I’ll never meet who’ve still managed to impact my life,” she wrote. “I’ve met their brothers, their wives, their husbands, their children and their parents. The legacy those brave souls left behind, what they gave their lives to protect, is always unfathomably strong.

“I spend time every day remembering the fallen and mourning America’s loss,” she continued. “So now on Memorial Day, I still remember, but I celebrate. When those unyielding heroes left this world, they passed on strength, bravery and love to all those they left behind. That we even had such men and women in this world leaves me with hope for the future.”

So, wrote Dague, I will celebrate their lives and memory and cherish their legacies. And I’ll try to live up to their example every day, in the hope that, in time, we will have a nation filled with people like them.”

AFTER MONDAY MORNING’S CEREMONY, Navy Capt. (ret.) Robert “Dave” Davis explained what it meant to him. He also proudly noted that he served “53 years, one month and 23 days” in the Navy – 38 years on active duty and 15 teaching ROTC to students.

“I’m 73 and tickled to be here,” said the Lorton resident. “It gives me the opportunity to come out and show we appreciate the recognition for our service. It’s about God, our country and our families.” Then, referring to those who lost their lives in wartime, he added, “Their service doesn’t die in our hearts.”