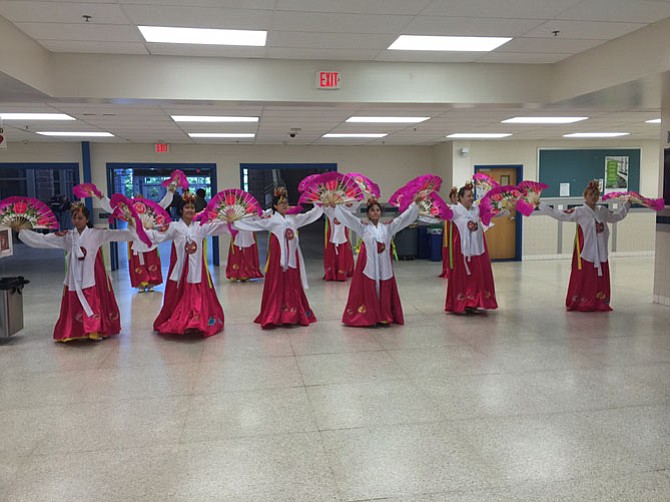 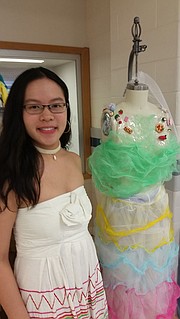 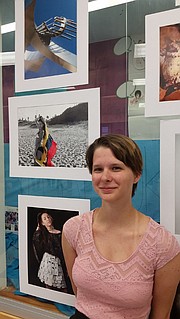 Shelley Mead, graduating senior, and a selection of her photography work. Her three years spent at the Academy’s photography program helped her “see the details in everyday life.” She plans to put that to use in pursuit of a criminal justice degree. 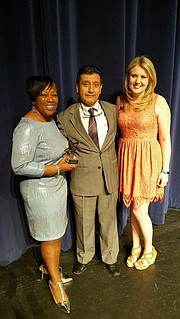 Area residents and alumni of Fairfax Academy for Communications and the Arts gathered for its annual awards ceremony on Wednesday, June 8, at Fairfax High School. The wide array of genres the Academy instructs were showcased and its students honored.

Over 550 students attend the Academy, taking its advanced classes in art, design and language, in addition to required courses at their primary high school within the Fairfax County Public School system. Diego Wilson, the administrator of the Academy, considers the showcase and awards a “culmination of student accomplishment and what they have learned.” Students from eight of the Academy’s nine schools created performances or displays for visitors to enjoy during the showcase.

Guests were free to explore the students’ work. Dances, photography displays, wearable art displays, Chinese calligraphy, Korean fan dancing and film from students in the TV Production class created while interning with Rebel Run Sports were displayed inside. Many enjoyed the food in the outdoor courtyard catered by the 29 Diner, a long-time supporter of the Academy, according to Erin Bloom, while listening to the students playing music.

THE AWARDS, hosted by Assistant Superintendent of City of Fairfax Public Schools Dr. Phyllis Pajardo, was a chance to “...all get together and reward each other … thank you’s for all the hard work…” and to let the students know that the Academy “will always be there for them,” according to Michael Replogle, instructor of the Musical Theatre and Actor’s Studio. The winners made their way to the stage amongst whirling spotlights to receive their Oscar-inspired golden trophy and congratulations.

Throughout the ceremony were performances more suited to the stage. Korean Samulnori drumming led by the instructor of Korean language, Song Johnston, provided a lively and dramatic ceremonial start. “She Who Dances,” choreographed by instructor Andrea Heininge combined different levels of the dance program into a cohesive whole while still managing to highlight each dancer through its use of short solos.

The Academy’s Professional Musical Theatre and Actor’s Studio performed “Mama Who Bore Me,” from the musical Spring Awakening. Replogle chose to present the piece in traditional musical theater style, without amplification, assuring students that they “can do more than (they) think.” The 11 students that took the stage successfully projected their voice, presence and the drama of the piece to the back rows of an auditorium capable of seating 1,100, about the same number of seats as the Eisenhower Theatre in the Kennedy Center.

The students’ and faculty’s response to an unanticipated technical problem effectively displayed their professionalism and students’ ability to thrive under pressure. The final performance of the evening was a fashion show by student designers Hannah Thomas and Alexis Beuchert. However, the accompanying music would not play.

Eventually a student model stepped authoritatively into the middle gap of the curtains at the back of the stage and the audience fell silent in the theater. The methodic stab of heels on wood was the only sound as each imaginative design and its model filled the void taking defiant strides across that black silent stage to its edge, posing above the audience.

The intense and diverse colors, bold designs and striking cuts became raw statements, all the more dramatic as the fashion was stripped down to its fundamentals by the lack of music: haute couture and the model it was fitted for.

THE CROWD broke into overwhelming cheers and applause. Eventually the music kicked in and the show finished with its accompaniment.