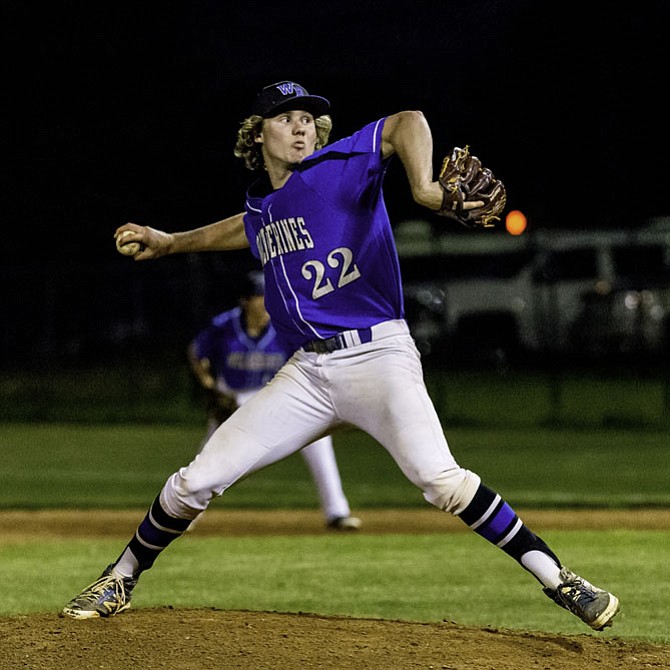 The San Diego Padres selected West Potomac pitcher Jamie Sara in the 12th round of the MLB Draft. Photo by Will Palenscar

Jamie Sara had a limited role on the West Potomac pitching staff during his sophomore season. As a junior, his workload on the mound increased. By the end of his senior year, Sara had developed into an MLB prospect.

The San Diego Padres selected Sara in the 12th round (No. 354 overall) of the MLB Draft last weekend. Sara, who is signed with the College of William & Mary, wrote in a Twitter direct message that he hasn’t made a decision about his baseball future and “would like to keep it personal and discuss it with [his] coaches and family.”

Sara ended his high school career with a pair of stellar starts.

Facing Woodson in the Conference 7 tournament quarterfinals on May 16, Sara threw a one-hit shutout and struck out 17, leading the Wolverines to a 2-0 victory that secured a berth in the 6A North region tournament.

On May 25, facing Conference 5 champion Chantilly in the opening round of regionals, Sara allowed one unearned run and two hits in 7 1/3 innings. He walked two and struck out 10 but received a no-decision. West Potomac lost 2-1 in nine innings and Chantilly went on to win the state championship.

“We had inklings that he had a real good shot at being drafted,” West Potomac head coach Jim Sullivan said. “I only heard in the last few weeks that he could have gone as high as he did.”

Sullivan said scouts in recent weeks told him that Sara was sitting 88-92 m.p.h. with his fastball. Sullivan said the Padres likely drafted Sara, who stands 6 feet 4 and weighs around 200 pounds, for his potential to develop as a pitcher.

“They think he can still add several miles per hour to his [pitches],” Sullivan said. “For a power pitcher, he’s got some pretty good control on his curve and his changeup.”