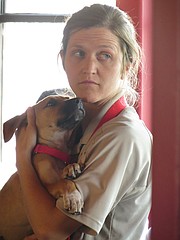 Tandoori, a puppy recently brought in from a nearby shelter, with Officer Megan Boyd. 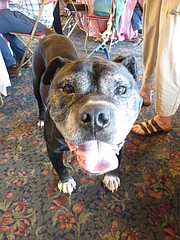 Gage was brought in to be euthanized, but was treated and saved by Animal Welfare League veterinarians. Since then, Gage has been staying with a new foster family.

It was all paws on deck Sunday, June 12, as staff and supporters of the Animal Welfare League of Alexandria were joined by dogs and a kitten for a trip up the Potomac on the Potomac Riverboat Company’s “Cherry Blossom.” The event marked a celebration of the organization’s 70th anniversary.

In preparation for the anniversary, AWLA Executive Director Megan Webb said she spent time looking back at how the shelter started. It was 1946 and the Second World War had just ended. The shelter was a decrepit wooden hovel where it was recorded that some local residents broke in to rescue dogs being kept inside in unsafe conditions. It’s a far cry from the modern Vola Lawson Animal Shelter at 4101 Eisenhower Avenue, but in some ways Webb says the mission has remained familiar throughout the years. She was particularly touched by notes where volunteers at the shelter were trying to match a WWII veteran with a suitable dog.

Now, the Animal Welfare League has been working on expanding its mission. The shelter sometimes takes in dogs from other shelters in Virginia, particularly those with high euthanasia rates, and made headlines for their adoption of dogs from Korea from being butchered.

“It’s addictive,” said Flynn, and encouraged anyone who loves animals to get involved with the local shelter. “You have to come out, you just have to do it. When you realize how they react to kindness and attention… you can’t give up on them. It’s so gratifying to know that you’ve helped them become adoptable.”