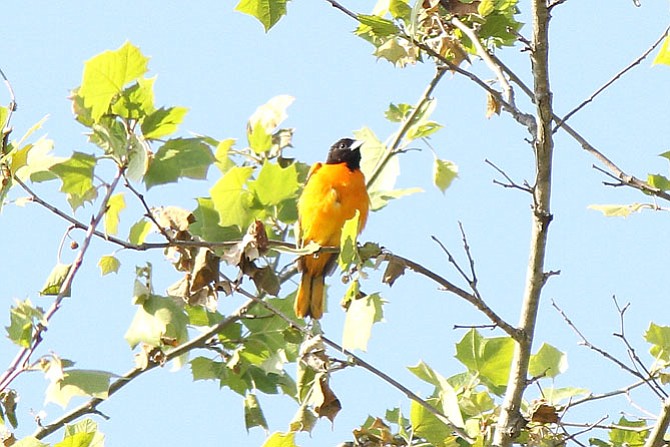 An oriole on the top of a tree in the C&O Canal National Historical Park at Great Falls. Photo: © Donald M. Sweig

Male Baltimore oriole, with a morsel in his beak, feeding three apparent chicks, on June 6.

Female feeding a large and exuberant chick, which by then was developing the same plumage coloration as adult. June 10 or 11.

Oriole chick, now much more developed and exercise-flapping its wings. It seemed almost ready to leave nest, June 10 or 11.

Every five or 10 minutes, one or the other of the adult Baltimore Orioles returned to their pendulous, hanging, nest, with a beak full of food for their recently hatched chicks. From dawn to dusk, day after day, the oriole parents provided sustenance for their fledgling young. For those of us privileged to occasionally watch from the ground, it was a spectacle of wonder and inspiration

As previously noted in "Colorful Spring Birds at Great Falls" (Potomac Almanac April 27 - May 3), the Great Falls national parks on both sides of the river are good places to look for nesting spring birds. And, for me, the resplendent, orange-and-black Baltimore orioles, with their sweet, melodious song, are the stars of the show. The C&O Canal National Historical Park at Great Falls on the Maryland side of the river is a particularly good place for finding and seeing these enchanting birds. I have been seeing, enjoying, and photographing Baltimore orioles there for over 20 years.

This year, 2016, I was joined several times by my birding friend Mary Kimm (who is also the publisher of this newspaper) in looking for and enjoying the orioles. There are many pairs of Baltimore orioles nesting in or around the park. In early to mid-May, it is relatively easy to hear their melodious song and to see them flying around. A more difficult endeavor is to find a Baltimore oriole nest, especially one that is easily observable. Orioles frequently build their nests in Sycamore trees, but the nests are often high up and well camouflaged, and therefore difficult to find. This year Mary and I were very fortunate to find a Baltimore oriole nest in a relatively-low overhanging branch of a large sycamore tree, just upriver and easily visible from the concrete Washington Aqueduct Overlook platform, just across the C&O canal from the visitor center at Great Falls.

In early and mid-May, we often saw the singing, bright-orange, male oriole perched atop this tree, declaring and protecting his territory. Occasionally, after we had located the nest, we would see the more subtly-colored female oriole fly in or out. Did she have and was she sitting on eggs, we wondered again and again. Our curiosity and wondering carried over from late May into June. Finally, on Monday, June 6, when I stopped by to check on the nest, I saw clear and unmistakable signs of the adult Orioles feeding their chicks.

There is no way to know when the chicks actually hatched, but on the same day that I first noticed the feeding behavior, I was able to discern four small beaks sticking up out of the nest.

On Thursday and Friday of the same week, I again saw the adult Orioles feeding and tending to their rapidly growing and ever larger offspring. By the time my friend Mary joined me again on the afternoon of Saturday the 11th, the chicks were quite large and very active. By that time, they were not only aggressively competing for the food that the parents brought, but moving around and often flapping and exercising their wings in the nest; a sure sign that they were about to fledge and leave the nest. The biggest of the chicks even climbed up onto the edge of the nest, and then, losing its balance, fell back in. When we left about 5 o'clock Saturday afternoon, neither Mary or I realized that this would be the last time that we would see the chicks in, or their parents near, the nest.

The following Monday afternoon, the nest appeared to be deserted; no chicks or adults were seen in or nearby. In all likelihood the chicks had grown big and strong enough to fledge and fly off. If so, they are likely still nearby; the forest along the river and the canal is thick and hospitable for both the adults and the fledged young. However, now that the adults have stopped singing and coming to the nest, neither they nor the fledglings will be easy to find or see again.

The Orioles will probably remain in or near Great Falls until late August or early September, when they will begin their migratory flight south to their wintering grounds, probably in Mexico and South America. If they are strong and if they are lucky, one or more of this oriole family may return to Great Falls Park next Spring to mate and breed again. Wish them luck, and look for them again in May.

Donald Sweig, a retired professional historian, ornithological enthusiast, and birder, is an occasional contributor to the Almanac.