A new principal at H-B embraces an old school tradition. 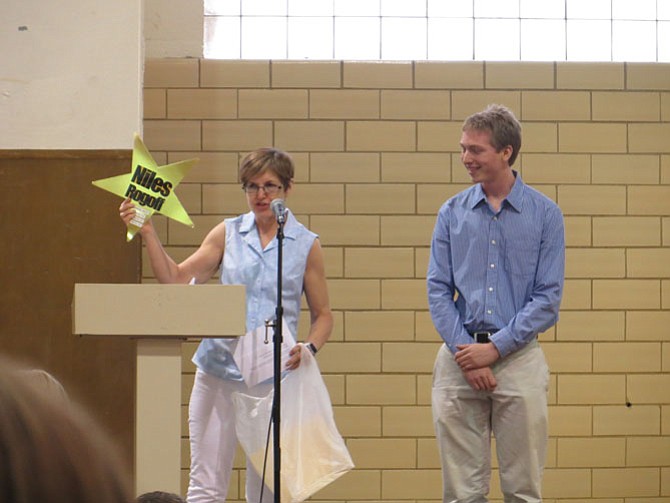 H-B Woodlawn is a little different.

At the June 23 graduation ceremony, there’s not a cap and gown in sight. Students don’t file into an auditorium and cross a stage to receive their diploma. Students, family, and friends all mingle together one last time as a class.

“Our graduations are a little different,” said Principal Casey Robinson, a phrase students and teachers repeat often. “Our focus here is on the students.”

The 2016 graduation marks the end of Robinson’s first year as principal of H-B, though it’s far from her first year at the school. Robinson graduated from H-B Woodlawn in the class of 1995.

“I was lucky to have found this community when I was young,” said Robinson. “The things I loved about high school made me want to be a teacher.”

Robinson taught 7th grade social studies at H-B for seven years and has been an assistant principal at the school for the last five years. She says her transition into the position felt smooth and natural, largely thanks to the succession planning done by her predecessor, Frank Haltiwanger. Both Haltiwanger and founder Ray Anderson attended the graduation and cheered on the students.

The greatest change Robinson says she’s encountered is that when she was assistant principal and face a difficult decision, there was always someone else to go to for the final judgement. Now, Robinson says those decisions fall to her.

“It’s a lot of moving parts, a lot of change happening,” said Robinson, the most obvious of those changes being the complete relocation of the school in the fall of 2019 to a new building.

For Haltiwanger, retirement has been bittersweet.

“I really miss all of this,” Haltiwanger said, nodding into the room where the graduation was taking place. “It’s very affirming seeing it all continue on.”

At the graduation, students as individuals or small groups went up to the stage with a teacher, who told stories about the students to the rest of the class.

“Today is wonderful,” said Bill Podolski, the chorus teacher. “We’ve raised most of these students since 6th grade. This is the capstone moment. It’s a real celebration.”

Podolski said that the class of 2016 was a particularly musical class. The group took a trip to New Orleans, which Podolski said was the best trip he’s ever been on with the school. Podolski said his students got to interact with local students from New Orleans and experience a new culture and musical scene.

“It’s kind of surreal,” said Luke Bultena, one of Podolski’s students. Bultena is going to St. Olaf College to study music. “I’m not going to enjoy not going here, but all good things must come to an end.”

Like his teacher, some of Bultena’s most prominent memories from the school year were outside the classroom. The seniors took a trip into the woods and went canoeing. Paddling alone, Bultena accidentally tipped his canoe over and, in the process, lost his glasses, wallet, and phone. His friends teased him but helped him out through the rest of the trip.

“That’s H-B Woodlawn right there,” said Bultena. “Sometimes you tip your canoe, but they’re all here to help you get back up.”

Usually, these are stories about their growth and evolution. Teri Doxsee, an instructional technology coordinator at H-B, recalled how when Niles Rogoff first began to attend the school he had strong supervillain potential.

“Four years ago, Niles was using his skills for mischief. I was quite concerned,” said Doxsee, but Doxsee says she began to see a change in him over the years. “We developed an understanding and he started using his skills to help students and teachers.”

Rogoff began to help students and teachers with technology issues, even teaching web development and coding classes. Rogoff developed a program to help students arrange their schedules, won second place at the civic hackathon and first place in the Arlington County Tech Expo.

For Thomas Mallan, a drama teacher at H-B, the evening didn’t just have an impact as a teacher but as a parent.

“It’s always a really emotional event, because teachers know the kids profoundly,” said Mallan. “I don’t think you realize just how impressive these students are when you just hear a name, but when you hear the stories you hear who they are as they’re in this hourglass, passing from childhood into adulthood.”

“As endings go, it’s perfect,” said Thomas Mallan. “You’re right there with your kid, sharing a moment. I’ve been teaching his drama class since [he was little], it will feel weird with him gone.”