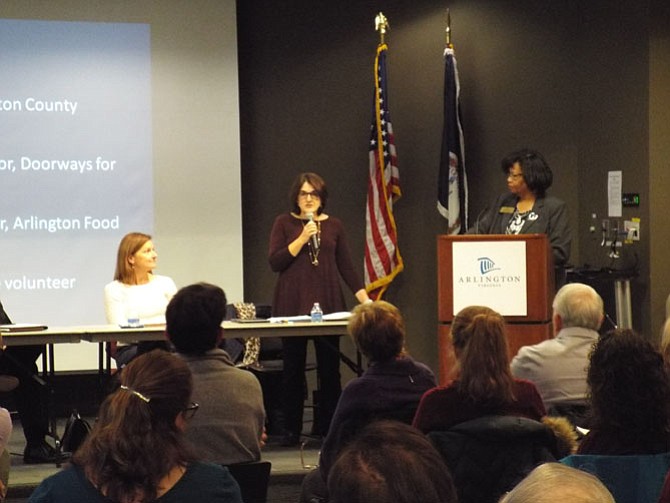 According to the U.S. Census Bureau, more than 17,000 Arlington residents are living at or below the Federal poverty level of $24,250 for a household of four.

“They are your cleaning ladies, or the retiree living down the street. They are the child care providers, the office cleaners, and the hotel workers. They are the parents of children your child may go to school with.”

“That’s a conservative estimate,” said Anne Vor der Bruegge, report author and director of the Marymount Nonprofit Resource Center. “A more realistic one, called ‘The Virginia Poverty Measure,’ estimates that there are over 26,000 individuals in Arlington living in poverty. These are the working poor, the disabled, seniors living on fixed incomes and veterans.”

More than 100 community members convened at Arlington’s Central Library on Feb. 1 to hear a report on the work of 14 Arlington “safety-net” nonprofits that provide basic necessities for Arlington residents like these. The report, “Arlington’s Safety-Net Nonprofits: Advancing the Common Good,” was produced by the Marymount University Nonprofit Resource Center in Partnership with the Arlington Community Foundation.

“One reason we did this report is that the vulnerable residents of Arlington are often obscured by the wealth most people see around them here,” said Vor der Bruegge. “But these are real numbers with real human beings behind them. And ‘these people’ are as much a valuable part of being an authentic community as anyone else.”

According to the report, in FY 2015, demands are increasing: AFAC (Arlington Food Assistance Center) saw an increase in demand for food of 19.4 percent over the previous year, which itself saw a 26 percent increase over the prior year. Recent cuts to the federal Supplemental Nutrition Assistance Program (formerly Food Stamps) have forced even more families to seek help.

The Marymount University Nonprofit Resource Center in Partnership with the Arlington Community Foundation Center, sometimes called the Nonprofit Center, was created in late 2014 to educate the public on pressing community needs and to support Arlington’s nonprofits in meeting those needs.

The report highlighted the cost-effectiveness of the safety-net non-profits. They provide high-quality affordable services by leveraging donated goods and services and attracting corporate, philanthropic and public funds. In the past year, for example, Arlington Free Clinic provided ongoing medical care to more than 1,600 uninsured community members by coordinating the services of 500 volunteers and accessing several million dollars in donated medications.

The organizations multiply their impact through strategic collaboration with each other and in public-private partnerships with Arlington County. Each organization focuses on what it does best while ensuring that clients access additional services they need from other organizations. For example, Doorways for Women and Children partners with the Arlington Partnership for Affordable Housing to help victims of domestic violence find safe housing while working with the victims to build their self-sufficiency and heal from the trauma of abuse.

A social return on investment analysis reveals the value delivered and costs avoided by these nonprofits. CIting a national study, the report notes, according to several conservative estimates, every dollar invested in addiction treatment programs yields a return of between $4 and $7 in reduced drug-related crime, criminal justice costs, and theft. When savings related to healthcare are included, total savings can exceed costs by a ratio of 12-to-1. In examining the social return on investment of AFAC’s services, a George Mason University study estimates groceries from AFAC help to avoid upwards of $4 million in health care costs associated with food insecurity in Arlington County.

These 14 non-profits also contribute to Arlington’s economy. Although nonprofits by definition do not make a profit, they do generate revenues to support their services, and they make significant expenditures in delivering these services. As with other businesses, they pay taxes and hire employees (who in turn pay taxes and spend money on local consumer goods and services). in FY 2015, these 14 nonprofits generated $58 million in revenues, employed 444 individuals and paid $6.6 million in property taxes. “That is 14 fairly small grassroots nonprofits, not even counting the whole nonprofit sector, which would include the bigger nonprofits,” Vor der Bruegge said.

The Nonprofit Resource Center is a knowledge hub for Arlington nonprofits. The Arlington Community Foundation provides funding and other material support to the Center as a means of extending its investments in Arlington nonprofits. Marymount students and faculty provide services while being exposed to issues that transcend the formal academic environment.

Vor der Bruegge said the Nonprofit Resource Center would be looking ahead to the gaps which remain unfilled in the Arlington area; there are many. For instance, last year, Guest House received over 378 applications, averaging more than one per day, for its residential program for female ex-offenders, and yet could only house 66 women in the program.

Vor der Bruegge urged residents to read the stories about those who were helped: “These are people that you run into in daily life,” she said. “They are your cleaning ladies, or the retiree living down the street. They are the child care providers, the office cleaners, and the hotel workers. They are the parents of children your child may go to school with.” Vor der Bruegge lamented that many Arlingtonians still don’t understand the need to support fellow residents who have emergency needs, or need affordable housing. At the same time, she said, Arlington is a prime example of nonprofits working collaboratively and with unusually strong support from local volunteers.

The full report is online at http://bit.ly/1PpA5IG.

The FY 2015 economic impacts of the 14 nonprofits covered in this report are as follows: