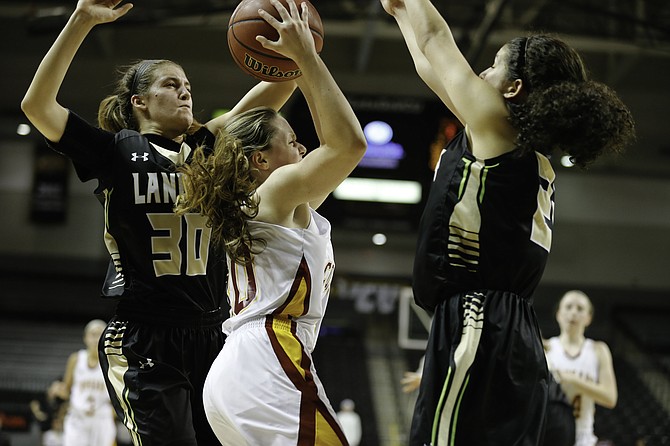 Langley's Ari Aulisi, left, and Lizzy Shamloo defend Oakton's Kailyn Fee during the 6A state semifinals on Tuesday at VCU. Photo by Will Palenscar

Sophomore guard Jordyn Callaghan led Langley with 14 points during the Saxons' win over Oakton in the 6A state semifinals on Tuesday.

RICHMOND --- The Langley girls’ basketball team played Oakton tough during the region semifinals, but falling behind early threw a wrench in the Saxons’ plans of knocking off the undefeated Cougars.

Eleven days later, Langley got a second shot at Oakton and this time the Saxons didn’t wait to get going.

Langley jumped out to an 11-2 lead and never trailed during a 47-38 victory over Oakton in the 6A state semifinals on Tuesday afternoon at VCU.

After limiting the Cougars to 44 points during their region tournament matchup --- a three-point Oakton victory --- the Saxons were even stingier this time, holding Oakton to a season low. The Cougars, who entered the game averaging 61 points per contest, had 18 through three quarters.

“I think we started the game the best way we possibly could have started --- extremely aggressive, looking to score, getting them on their heels early,” Langley head coach Amanda Baker said, “and then we just kept it going the entire game.”

Langley, making its first state tournament appearance in program history, will face Cosby in the championship game at 7:15 p.m. today.

Led by junior forwards Maddie Royle (6 feet 1) and Delaney Connolly (6 feet), and senior guard Alex Marquis, Oakton spent much of the season dominating opponents. On Tuesday, Langley (26-5) was able to limit the trio to 24 points.

Connolly totaled 12 points and 12 rebounds and Royle finished with four points on 1-for-7 shooting. 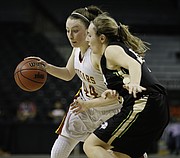 “We put a lot of prep into making sure we could defend them properly, especially [since] they have a really good high-low game, and we went through a lot of drills making sure we could get that right,” Langley senior Stephanie Sipple said about defending Oakton’s standout forwards. “It just took a lot of hard work in getting around them because they’re very skilled players and they really know how to get a body up against you. It was amazing what we could do as along as we were talking.”

“I thought [Langley] played an excellent game,” Oakton head coach Fred Priester said. “They were able to stick to their game plan very, very well and cause us some difficulties, so they definitely deserved to win the game. We just got out-played today. We felt like we were in pretty good shape coming in. It’s tough to go undefeated all year. It’s just a lot of pressure.”

Langley didn’t shoot the ball well, either, making just 12 of 44 field goal attempts, but the Saxons made up for it with timely buckets and solid foul shooting. Langley shot 20-for-28 from the free-throw line, led by sophomore guard Jordyn Callaghan who made 12 of 13 attempts.

Langley senior Lizzy Shamloo knocked down a 3-pointer with 3:02 remaining in the third quarter, giving the Saxons a 26-16 advantage. Langley led by at least nine for the remainder of the contest.

Junior guard Ari Aulisi’s 3-pointer with 5:18 remaining in the fourth quarter gave Langley a 34-18 lead; it’s largest of the game.

“We knew that they’ve never been in that situation --- they’ve never been down,” Callaghan said about the Cougars, who entered Tuesday’s contest with a 29-0 record. “On the other hand, we’ve been down; we’ve been in close games, so we know how to grind it out. We knew … if we just keep scoring points and not letting them score points then they’d just slowly get down on themselves and then we’ll rise up.”

Marquis, asked to give advice after playing in her final high school game, said the Cougars are used to things going their way.

“I just think that we always have to play as a team and we can’t get down on ourselves,” Marquis said. “I think that the shots in the beginning that we’re used to falling and getting us ahead, kind of getting our momentum going, just weren’t falling today, so we realized we kind of had to resort to other things and we’re not used to that. We’re used to our shots falling and everything kind of working in our favor. We just can’t get down on ourselves and we have to find a new way to do it.”

Langley will now face a Cosby team that has won the last two 6A state championships. The Titans are led by 6-foot-2 senior and Wake Forest signee Tyra Whitehead, and 6-foot senior guard Jocelyn Jones, who will play for the University of North Carolina.