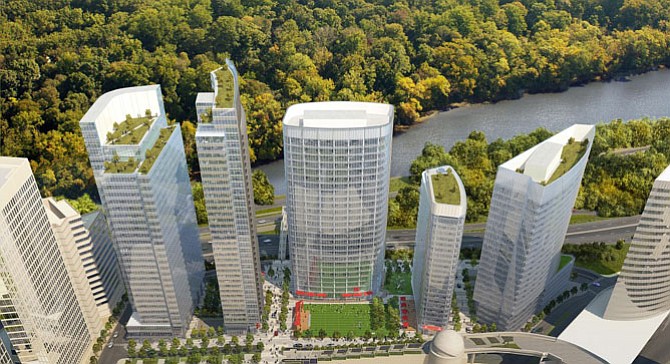 Concept rendering for the new Rosslyn Plaza along the waterfront. Photo Contributed

With five phases of development spread across 25 years, the newly approved Rosslyn Plaza will be the single largest redevelopment in the Rosslyn neighborhood. At the March 12 County Board meeting, the board unanimously approved five new buildings along the Rosslyn waterfront. The new project, proposed by Vornado/Charles E. Smith and Gould Property Company, will include 2.5 million square feet in office, residential, retail, and hotel space. However, while the County Board approved the project, some local residents were not as enthusiastic.

Arlington residents raised a number of concerns about the sites, ranging from everyday traffic to more extreme topics like whether or not the building would be in harm’s way if a plane flying into or out of Ronald Reagan National Airport lost control of one engine.

“When you look at a site plan you see numbers on a piece of paper, but in this case, the height numbers represent the potential loss of life in Rosslyn,” said Diane Gorman, a local resident. “I appreciate benefits, especially bridges connecting the freeways and Mount Vernon Trail, but no benefit is worth [lives].”

Gorman noted that American Airlines and the Washington Airport Authority had expressed concern over the building height in relation to the one engine out scenario. However, Brian Stout, Arlington County’s liaison to the Federal Government, said that the Federal Aviation Administration had not found significant concern with the buildings, though he did say that the FAA does not consider the one-engine-out scenario in these considerations.

For other residents, the primary issue was the height of the building, particularly that the new structures would literally and metaphorically overshadow the other residences in the surrounding area.

The Rosslyn Sector Plan, approved in 2015, pushed for a “peaks and valleys” approach to heights along the Rosslyn waterfront, to which the staff report noted that the development conforms. The “peaks and valleys” concept required multiple buildings to have at least a 30-foot height difference with their neighbor. It was the maximum heights that got the most notice, however, with some of the buildings proposed at 390 feet, above the current maximum of 300 feet. However, those building heights remain contingent on future rezoning approval.

But the feedback from the public was not entirely negative. Mary-Claire Burick, president of the Rosslyn Business Improvement District, noted that some concerns remained about the specific location of the public park on the property, but said she believed that the project overall was a win for the community and represented a direct investment into Rosslyn.

Burick’s view seemed echoed by the County Board. County Board member Christian Dorsey noted that the disagreements had been questions of preference rather than substance. The board spent three hours looking over the concerns raised over height, airline concerns, park locations, and other issues. On areas where the board expressed hesitation, it was decided that the topics would be settled when the individual phases of the project were brought to the board for approval.

“We’re at the stage now where we’re determining what is the maximum universe of what we accept,” said Dorsey. “There’s nothing that we’re going to decide today that indicates what that final building will be until the developers comes to us with a specific application.”