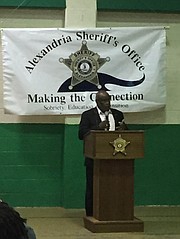 Euille speaks to inmates at the Alexandria Detention Center.

“Before we start, I want you to know that I can’t do anything to get you out sooner,” said former Mayor William Euille to inmates at the Alexandria Detention Center on March 10. Euille spoke about his own experiences with successes and defeats throughout his life, including his recent loss to Vice Mayor Allison Silberberg.

“Did it catch me by surprise? No,” said Euille. “Was I prepared to lose? No … but after 22 years of elected office, I’m free to just be Bill Euille again.”

Since the loss, Euille says he’s been working for America’s Future Workforce, a nonprofit that advocates for fair workplace practices. This work brought him to the detention center.

“For so long, ex-cons have been ignored in our workforce,” said Euille. “We have to look at the people in our institutions. I want to have a one-on-one dialogue to help.”

Several inmates took Euille up on that offer, the universal reaction being that any kind of steady job post-release from jail is a vital part of keeping them from slipping back into criminal habits.

“The enduring issue behind curbing recidivism is employment,” said Ian Simpson, an inmate at the detention center. “If gainfully employed, it wouldn’t be as much of a rat race.”

Simpson is a native Washingtonian who says that once he’s released from jail he’d like to work to help other ex-cons find employment.