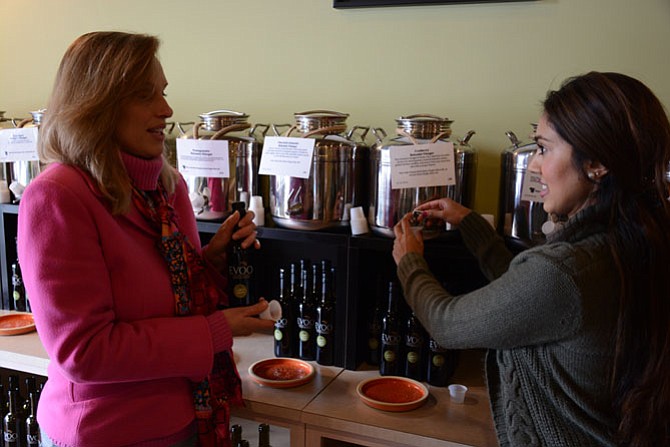 Patty Damiani of the Fort Hunt area (left) and Ransha Ahmed of Alexandria sample and discuss some of the flavored balsamic vinaigrettes at EVOO at Mamma’s Market. Photo by Tim Peterson. 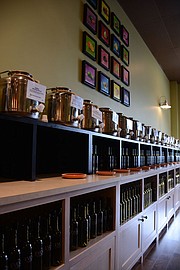 “I believe in this area,” Johnnides said. “Hybla Valley, why not? This is our home base, it’s where I grew up. I like the small, local community. There’s a sense of familiarity.”

In May 2015, Johnnides further proved her commitment to doing business in the community, as well as her goal to “upgrade” it, by expanding her Greek, Italian and American cuisine restaurant to a market next door that sells Extra Virgin Olive Oil, balsamic vinaigrette, organic honey, flavored salts and dried herbs.

Johnnides acknowledges a store like her EVOO at Mamma’s Market is a stark contrast to the abundance of car title loan businesses along the Richmond Highway corridor, that it caters to a higher price point lifestyle. She sees the distinction as an opportunity to set an example for other businesses.

“If I can be in this location for this long with my restaurant, I’m doing something right,” Johnnides said. “People shouldn’t be scared to put places like this in this location. You’re able to pull people, this market should prove that.”

Johnnides said she had a strong first winter holiday season at EVOO, already seeing return customers since the early summer opening. The shop’s array of oils and vinaigrettes “fused” with crushed and pureed ingredients including blackberry, lemon, vanilla, pear, chocolate, jalapeño and espresso performed well as gifts, she said.

The classic gyro, baked pasta and pizza with dough made daily from scratch are staples of the lunch menu at Mamma’s Kitchen on Fordson Road.

The shop and restaurant owner’s family originally came from the Cyprus area where olive oil was the foundation of all her mother’s cooking. Once in the United States, her father worked in the restaurant business in Old Town Alexandria.

Johnnides’ philosophy for the Mamma’s Kitchen restaurant was simple and a continuation of her mother’s traditions: “Cook like I’m cooking at my house.” That means a focus on fresh ingredients, grilled meats and plenty of Extra Virgin Olive Oil.

Along the way, Johnnides began bottling some of the house dressings and sauces for sale, as well as offering cooking demonstrations with ingredients used in Mamma’s Kitchen. By September, 2014, she began considering an extension of the restaurant to make more room for that developing business. By the beginning of the following summer, EVOO was a reality.

A major component of the new space is a large open kitchen at the back of the store, bounded by a half-moon bar and stools. Johnnides uses the area to host public and private cooking classes and tastings.

The open cooking and dining space at the back of EVOO at Mamma’s Market is used for group demonstrations and classes, as well as team-building.

The space allows Johnnides to promote another family and cultural tradition: the lifestyle of cooking together.

The final class in EVOO at Mamma’s Market March schedule is “Date Night Made Easy” on March 19 from 4-6 p.m. Cost is $60 per person. Menu includes Rosemary Lemon Chicken, Broccolini and Bulgar Wheat Pilaf. For more information or to register, call 703-660-6300.