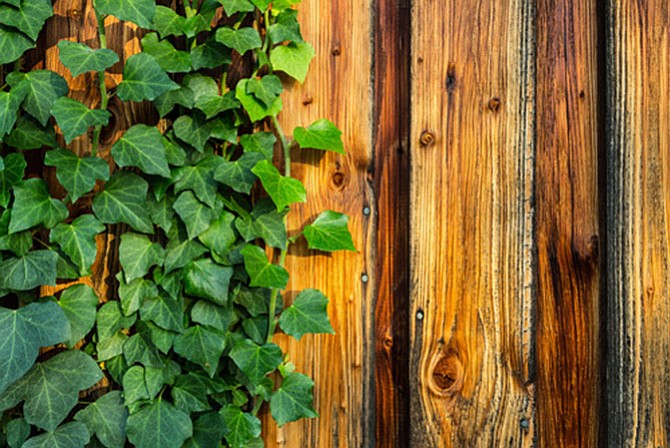 This spring, you may have noticed many beautiful white flowering trees dotting the Maryland landscape. Rising up from the banks of the highway or clustered in large masses on the fringes of forests, they appear to be the essence of springtime. These are no friendly trees, however. These are non-native species that have become invasive. And, they are steadily contributing to the demise of many of our local flora and fauna.

What is this tree? It is none other than the Bradford or ornamental pear. Initially developed as an ornamental hybrid, the tree’s tendency to collapse as it aged led to the introduction of more sturdy hybrids. Cross-pollination among hybrids resulted in fertile offspring with berry-sized fruits. Over the past decade, the seeds of those fruits have sown rapidly in the wild, disturbing natural areas and displacing native species.

The Bradford Pear is just one of many non-native plants that were brought to our area either accidentally or on purpose from other countries or regions of the United States. Most of the species have become naturalized and cohabit peacefully with their native plant neighbors. Some, though, have become extremely aggressive over time. These foreign plants have since become”alien” species, wreaking havoc on our local landscape.

How do these plants get so aggressive? They do so because they’ve left behind most of their natural predators and diseases in their places of origin. Without these natural curbs, invasive plants are free to grow unchecked once they’ve gained a foothold. Local deer populations stay clear of them (since they can’t digest non-native plants) as they rapidly overrun parks, farms and woodlands. Left unchecked, invasive plants can swallow up millions of acres a year, destroying vulnerable native species and dramatically altering our landscape.

Of course, some invasive plants wreak more havoc than others. Following are some non-native species that in recent years have become extremely aggressive. Once you familiarize yourself with them, you’ll start noticing these plants everywhere; on the towpath, on the fringes of woodlands, alongside the road, maybe even in your back yard. If possible, try to avoid purchasing these species at the plant store and consider planting native alternatives.

Many of you may already be aware of bamboo’s vigorous growth habits. It spreads rapidly by rhizomes and in one day can put on up to 3 feet of growth. There are two types of bamboo that originated in Latin America, the Caribbean and Asia: running and clumping. Running bamboo may act as a great privacy screen, but its deep, near impenetrable roots make it next to impossible to remove. Yes, it may make a great natural screen, but before you know it, the plant will be encroaching on you and your neighbor.

English ivy is not from England, but from Eurasia. It is a stunning groundcover, but once it starts to climb, this evergreen vine smothers branches, girdles trees and slowly kills them. In trees, the vine produces toxic berries that when eaten by birds, causes them to vomit them out, seeding the invasive species everywhere. Waxy leaf surfaces make it impervious to herbicides and it can sprout from any rooted section.

This Asian vine, greatly admired for its multi-colored berries, easily climbs over shrubs and trees, eventually strangling and killing them. The leaves resemble grape leaves, but the bark does not peel. The vine will invade in sunny or partially shaded areas. In Maryland, it is slowly taking over the local forest understory.

This beautiful vine was first introduced in 1906 from Japan to the United States as an ornamental plant. Fast growing, with showy, fragrant flowers it was an instant hit among gardeners. Highway planners began using it to control erosion. Unfortunately, the vine has now become aggressive and is engulfing trees and shrubs, shading much of the natural forest understory and choking out many native species. 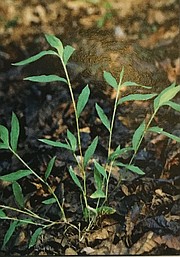 If you’ve been hiking on the towpath lately, you may have noticed dense stands of a small sized grass with bright green elongated leaves. This is Japanese stilt grass, also known as Nepalese browntop, a highly aggressive invader in the eastern United States. Growing rapidly in environments from deeply shaded forests to open hillsides, it quickly crowds out and destroys native species. It has few known predators and white-tailed deer steer clear of it. 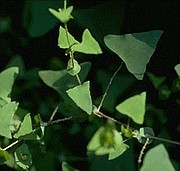 By now, most of us can recognize the invasive vine, kudzu that blankets many of the trees in our area parks and by the beltway. But, it isn’t only kudzu that is choking off Maryland woodlands. The miniature heart-shaped vine called Mile-a-Minute (also known as Devil’s Tear-Thumb) is a barbed annual vine that comes up in spring and is already making seeds by June. Native to Asia, it can grow 25 feet in one season in the sun or shade. Like kudzu, it kills the trees and shrubs it climbs on by shading and girdling them, occasionally even toppling them with its extra weight.

This fast-growing tree is native to China. It can thrive in the most inhospitable of conditions. Its long compound leaves resemble walnut (with which it is often confused); however unlike walnut, its bark is smooth and gray. The plant produces papery samara seeds in the early fall that hang in brown clusters all winter, while the roots produce toxins that kill competing plants. Suckers create huge colonies and cutting can’t control them; instead it stimulates a whole mass of new sprouts.

What can we do about this? Start with looking to buy native species. Or, if you buy non-native plants, make sure they’re not on the Maryland Invasive Species list. As regards the Bradford Pear, the native tree, Downy Serviceberry (Amelanchier), is a great substitute. A Missouri native, it is not invasive in our area. Each spring at this time, it produces heavy white blooms. It also produces masses of edible red berries that are delicious not only to wildlife but humans as well.

Interested in learning more? Join the Montgomery Parks Weed Warriors, a program dedicated to protecting the biodiversity in our area and combating invasive plants.

Or, go to Maryland Invasive Species at http://www.mdinvasivesp.org/invasive_species_md.html for up-to-date lists and information on all Maryland invasive plants.