Has it gone too far? 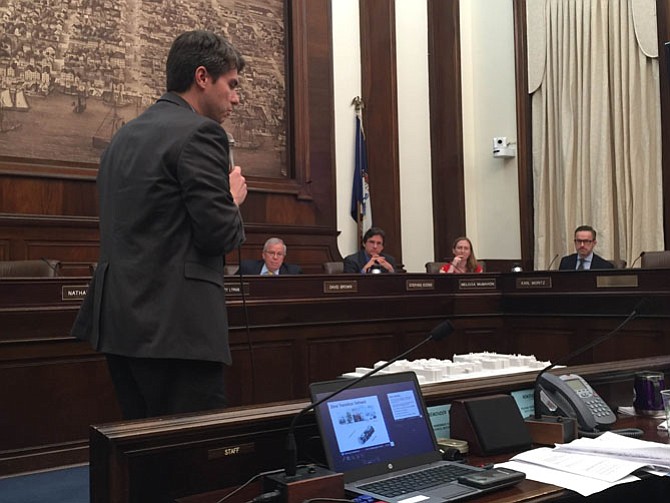 Planning Commission Vice Chair Nathan Macek points to the building scale on a display model, finding it appropriate with the height of nearby buildings. Photo by Vernon Miles.

After nearly a full year of back and forth through boards, commissions, and community engagement, the Old Colony Inn is one step away from redevelopment. Hot on the developer’s heels, however, were local neighbors objecting to the zone transition allowances by staff. But when some residents began spreading allegations of corruption, arguments suddenly backlashed against the neighbors when commission members said the personal attacks had hurt the local cause.

Throughout the last year, the expansion of the Old Colony Inn stirred controversy among neighbors throughout Old Town North, who argued that the added height would overshadow their properties. The initial designs for the expansion were presented to the Board of Architectural Review (BAR) in June 2015. At that time, the BAR asked the developer, CIA Colony Inn LLC, to consider additional setbacks. The BAR eventually approved the design unanimously in December.

However, at the May 3 Planning Commission meeting, it was clear that many of the nearby residents have not been satisfied with the changes. Resident Chris Newbury asked those in attendance in the City Council Chamber to stand if they disagreed, and the people in the back half of the room stood. Objections generally centered around the scale of the building, in particular the staff recommendation that the city waive a setback requirement for what was referred to as “minimal encroachment.”

Cathy Puskar, an attorney for the applicant, noted that each of the surrounding properties, including the homes that were protesting the development, had all been granted setbacks and exceptions during their development.

“Someone is trying to murder our neighborhood,” said resident Jim Herring, “Don’t buy into the self-defense argument.”

But as the meeting went on, many of the attacks from the public turned personal. Before the meeting, local resident Morrill Marston circulated an email calling Planning Director Karl Moritz a “disgrace to City Hall” for suggesting that the city waive a setback requirement for the building. After being told by Planning Commission Chair Mary Lyman that personal attacks on the staff would not be tolerated, Marston stood in the audience and shouted that the commission was naive.

According to the Planning Commission members, it may have been these types of arguments that helped seal the decision.

Additionally, Brown said that he heard and to an extent agreed with arguments from some residents that it was not ideal.

“But we’re not the Politburo, we don’t get to dictate what type of application comes before us,” said Brown. “We vote thumbs up or thumbs down. I believe that it’s a legitimate argument that zone transition should be applied more strictly, but that’s a policy argument. It has not been strictly applied [in the past] ... Reiterate those arguments to the City Council as a policy decision.”

As for the overshadowing of the nearby residences, Brown said that he had not found it to be a significant detriment.

In keeping with Brown’s advice, Newbury says many residents do plan on continuing the fight all the way to the City Council on May 14.

“I’m disappointed but not surprised,” said Newbury. “We made our best argument.”

Elizabeth Chimento said that residents had spoken to individual members of the Planning Commission and said two had already openly made up their minds before the meeting.

“They’re supposed to approach the citizens with an open mind,” said Chimento. “But they didn’t listen to us. It creates an unequal playing field.”

But for those on the commission, listening to the feedback from the public doesn’t always mean agreeing with them.

“This has been a successful community engagement, and with due respect to the dissatisfaction in the room, this project has been refined and thoughtfully addressed,” said Commission Member Stephen Koenig.

The decision passed with a unanimous 7-0 vote.