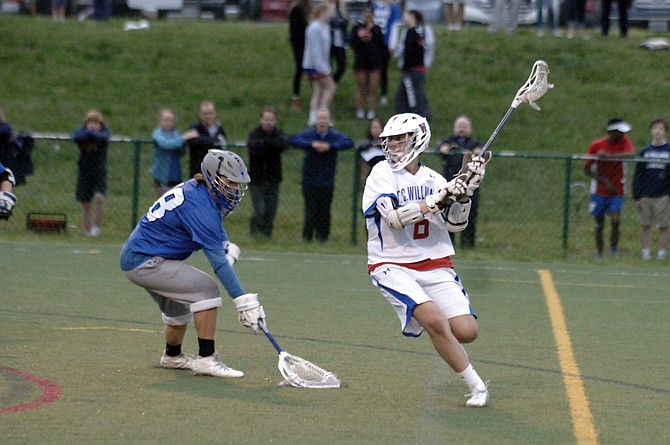 The stage was set. The T.C. Williams boys’ lacrosse team had earned its first home playoff game since 2007. Now, all the Titans had to do was beat rival West Potomac to return to the region tournament for the first time since 2011.

T.C. Williams scored the first six goals of Monday’s contest, led 12-1 at halftime and finished off West Potomac by the final score of 18-3 in the opening round of the Conference 7 tournament on May 9 at Minnie Howard.

T.C. Williams, the No. 4 seed, will travel to face No. 1 South County in the conference semifinals at 7:30 p.m. tonight. The Titans will compete in the first round of the 6A North region tournament on Tuesday, May 17.

“It’s huge,” TC head coach Mike Mulherin said about Monday’s win. “It gives us a couple more weeks of playing as a team. We’ve proven we belong in the top half of the conference and now we can go challenge ourselves against teams in the region that we haven’t seen yet this year.”

Monday’s game, however, was hardly a challenge. Three different Titans scored four goals against the Wolverines and seven scored at least once.

Seniors Phil Reilly and Dillon Smith, and sophomore Brody Dickson each had four goals for TC. Senior Sammy Zang finished with three goals, and seniors Scott Passalugo and Chase Larsen, and sophomore Ethan Hall each had one.

“We’re more of a team this year compared to a couple years ago, [when] we were individuals,” Passalugo said. “This team, this year, like you saw tonight, evenly distributed all the goals [and] assists. It’s something special and I’m happy to be a part of it.”

While teamwork might set this TC team apart, skill and confidence are other areas in which the Titans have improved.

The 2011 team that qualified for regionals was still developing skill-wise and finished with a losing record. The 2016 team, thanks to an offseason of hard work, has improved its stick skills enough that the Titans go into games expecting to compete. The result is a 10-5 record following Monday’s victory — the program’s first winning season since 2007.

T.C. Williams sophomore Brody Dickson was one of three Titans to score four goals against West Potomac on Monday.

“We set it as a goal at the beginning of the season: to be in the top half [of the conference standings], to host a home playoff game,” Mulherin said, “and ... [these] guys, they lived up to the goals they set for themselves and it was all through hard work in the offseason and a lot of effort by the players and team captains.”

Mulherin said qualifying for the region tournament is just as special now as it was in 2011, but this team is different.

“The 2011 team, it was a much different collection of folks we had,” Mulherin said. “It was still the very building blocks, we were trying to develop skill across the board in every position for the team and we were still fighting through a lot of inconsistencies. We’ve gotten to the point now where the expectation is everybody has stick skills and is an essential player in initiating the transition and starting ... the offense. It’s a much different attitude with the guys on the team.”

How have the Titans handled increased expectations?

“We’re just a fun group of guys,” Smith said. “We’re excited. We’re up for the challenge. We love getting everybody out here to the games and this was the year to do it and we’re doing it.”

Seeding is based on the results from conference tournaments.

“You hear about these stories and we’re finally on a team that’s something special,” Zang said. “It feels amazing and all the hard work that we’ve done, it’s paid off.”