Titans advance to face Patriot in 6A North region quarterfinals. 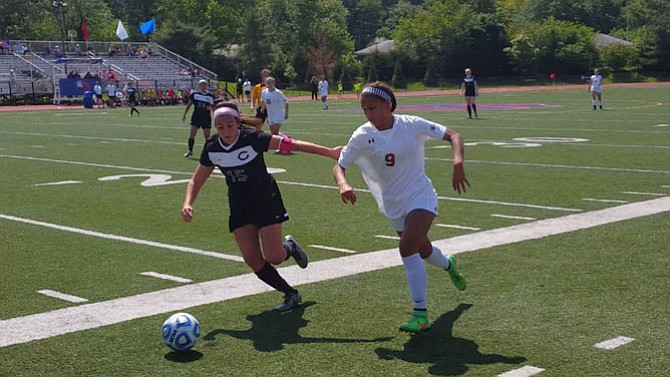 Claire Constant, right, and the T.C. Williams girls’ soccer team defeated Chantilly in an 11-round PK shootout on Tuesday in the opening round of the 6A North region tournament. Video screenshot by Jon Roetman 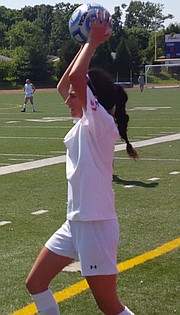 T.C. Williams senior Philomena Fitzgerald made the winning PK in an 11-round shootout against Chantilly on Tuesday.

After making a clutch save in the 11th round of a marathon penalty kick shootout, T.C. Williams goalkeeper Savannah Richardson awaited her next opportunity to make a difference in the Titans’ matchup with Chantilly in the opening round of the 6A North region tournament.

TC senior Philomena Fitzgerald then stepped up, shot left, stuck the ball in the back of the net and headed toward midfield for a celebration with her teammates.

Well, not all of her teammates.

Richardson remained behind the endline, unaware the game had ended. Each round of PKs following the fifth was sudden death, and Richardson’s 11th-round save had opened the door for Fitzgerald to send TC to the quarterfinals.

“I had no clue it was even sudden death,” Richardson said. “I was waiting for the next person to shoot and then ... everyone started screaming.”

Richardson eventually headed onto the field to join the rest of the Titans. Her job was done.

The T.C. Williams girls’ soccer team outlasted Chantilly in a memorable PK shootout on Tuesday, winning 1-1 (10-9) to advance to the region quarterfinals. The Titans, who four days earlier won the program’s first conference championship, will host Patriot on Thursday.

Richardson saved the first PK she faced in the shootout. After the next nine Chantilly attempts were successful, the junior keeper dove to her left and made the save that set the stage for victory.

“It was just having faith in my teammates,” Richardson said. “PKs for me, it’s just a hit or miss. I pick a side and I go. It’s really on my team and I trusted my team to shoot and score and that’s what they did and I’m super proud. I pulled through and they pulled through.”

Both of Richardson’s PK saves came against Chantilly’s Katie Abt. In the first round, Abt shot left and Richardson dove to her right and made the save. In the sixth round, when the pair was matched up again, Abt again shot left but this time she was successful as Richardson dove in the opposite direction.

In the 11th round, Richardson had a feeling Abt would try something different. The TC keeper’s prediction proved correct as Abt shot right and Richardson made the save.

“I had a feeling she was going to switch it up because she thought I was going to go to the same side,” Richardson said. “I had a little bit of intuition.”

Richardson’s 11th-round save meant Fitzgerald, who had converted each of her previous two attempts, was now in position to win the match, rather than facing the pressure of needing convert just to keep the Titans alive.

“It gave me that extra push to actually slot it in and get it in hard,” Fitzgerald said, “and completely trick the goalie.”

Fitzgerald shot left and the celebration was on.

“In that last [round], I have all the confidence in Phil in the whole world,” TC head coach Ally Wagner said. “She’s one of the most composed people I’ve ever met, especially when she’s playing soccer. ... Honestly. I was like, ‘We’ve got this.’ I just knew that Phil had it. She’s not the kind of person that would choke under pressure.”

Chantilly’s Katie McGrath, Victoria Iturbe, Mia Pham and Abby Rynex each made two PKs and Abt converted one.

T.C. Williams took a 1-0 lead in regulation when Caroline Bates scored in the 48th minute. Chantilly tied the score at 1 when McGrath converted a PK in the 67th minute.

After ending regulation tied at 1, the teams played four five-minute overtime periods, the last two being sudden death. Neither team scored during the additional 20 minutes of play, so the game was decided by a PK shootout.

The victory improved TC’s record to 17-2, including a 4-1 win over Woodson in the Conference 7 tournament championship game on May 20. The conference title was the first in the program’s history.

“It was a long time coming,” Fitzgerald said. “And especially to upset Woodson by the amount that we did, it’s just incredible. It really shows how our team has mended over the entire season.”