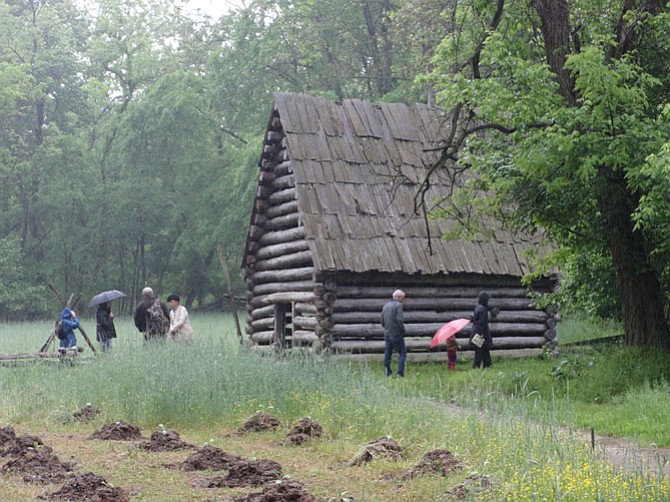 Tobacco plants grow atop a mound to prevent their roots from getting too wet. Next to the tobacco field is the tobacco house. Tenant farmers in the colony of Virginia grew tobacco to pay rent, tithe to the church, and taxes. Photo by Danielle Grae/The Connection 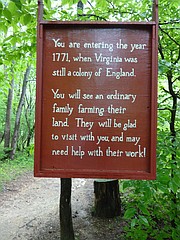 After driving past Tysons Corner, downtown McLean, and the CIA, visitors were transported back to 1771 Virginia by Claude Moore Colonial Farm’s Market Fair on May 22.

The farm replicates how tenant farmers lived in the English colony of Virginia before the Revolutionary War.

“We are showing the common folks’ story, a story that is not often told and one you do not necessarily find at other sites,” farmer, historic interpreter, and Manassas resident David Ludwinski said. “We are the middle class. We are the representation of how almost all people lived, whereas when you visit Mount Vernon you see how someone wealthy beyond imagination like George Washington lived.”

“We are the middle class. We are the representation of how almost all people lived, whereas when you visit Mount Vernon you see how someone wealthy beyond imagination like George Washington lived.”

The farm still has the descendants of animals that lived in Virginia in 1771 such as hogs and chickens. The farm still grows tobacco, which was used to pay rent, tithe to church, and taxes in colonial times. The farm also still grows food, which tenant farmers would eat in 1771.

“I always love coming here. My fourth-graders studied Virginia history, so I would bring them out here to do the Environmental Living program,” retired FCPS elementary school teacher, 35-year farm volunteer, volunteer chicken lady, and Arlington resident May Ohman said. The Environmental Living program involves living on the farm for three days and two nights to learn what it was like to live in Virginia in the 18th century.

Re-enactors demonstrated professions from the time such as making metal from raw materials, swordsmanship, cabinet making and more.

“I needed some new costuming for an event that I am going to next week and the prices here are reasonable for handmade clothing,” said sword master and Centreville resident Johnny Anderson, who has attended the Market Fair since 1991.

Some upcoming events include the wheat harvest on June 18 and the Summer Market Fair on July 16 and 17, which will include roasting chickens, dancing and singing, and testing of watercolor and writing skills.