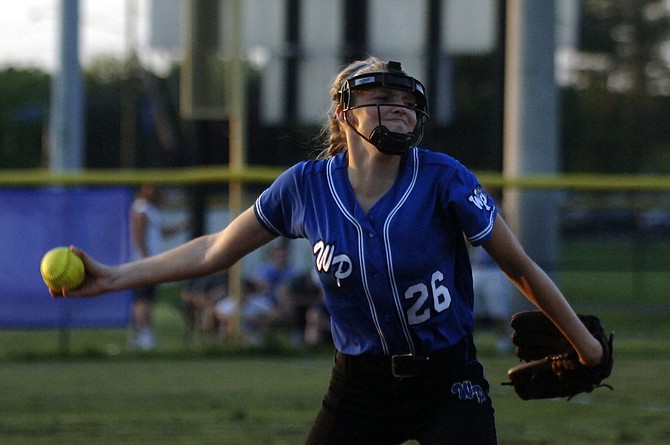 West Potomac pitcher Christina Dillard threw a complete game against Chantilly on Tuesday and earned the win in the opening round of the 6A North region tournament. Photo by Craig Sterbutzel.

The West Potomac softball team led Chantilly 4-1 in the bottom of the sixth inning Tuesday night but the Wolverines were in a jam. The Chargers had the bases loaded with two outs and a golden opportunity to get back in the game.

After Chantilly’s Kate Doherty took the first pitch of her at-bat, Divine threw behind the runner at third, who had wandered off the bag. The runner was eventually tagged out at the plate and the Wolverines were off the hook.

West Potomac defeated Chantilly 4-1 in the opening round of the 6A North region tournament at Chantilly High School. The Wolverines were the No. 4 seed from Conference 7 with an 11-10 record and the Chargers were the Conference 5 champions and winners of 15 of 19 games, but that didn’t stop West Potomac from reaching the region quarterfinals for the third time in the last five seasons.

“A lot of times we don’t worry about the beginning of the season,” said West Potomac head coach Craig Maniglia, who led the Wolverines to the region semifinals in 2012 and 2014. “We use the season as a guiding point to focus our energy so when we do get to the playoffs, we can draw on being close, being in every game. Three-quarters of the way through the season, we were still working out positions: who’s going to be where, who’s going to hit where. We use the regular season, obviously, to get better but we also use it to figure out the best team we can [have] ...”

West Potomac pitcher Christina Dillard tossed a complete game and earned the win, allowing one run on five hits in seven innings. She hit one batter and struck out six.

Dillard gave the Wolverines a chance to beat No. 1 seed Lake Braddock in the Conference 7 tournament semifinals before West Potomac eventually fell 1-0 in extra innings.

“She’s been an ace,” Maniglia said, “ever since the playoffs started.”

Dillard ran into trouble in the sixth, but Divine’s pickoff throw helped the pitcher out of a tough spot. Divine also went 3-for-4 at the plate.

“That’s just awesome,” Dillard said about Divine’s throw. “That was a rough inning. We were close and I didn’t want the runs to score and Harley and [third baseman] Raven [Williams], I can just always trust them. It’s awesome to be able to get out of that like that.”

Maniglia said Divine, a first-team all-conference selection, has picked off multiple runners during the season.

“She has a green light,” Maniglia said. “She knows it’s coming and we normally try to do it on the first pitch because they’re not looking for it.”

West Potomac scored a pair of runs in the top of the first inning, including an RBI single by Williams. The Wolverines added two more runs in the third inning on a sacrifice fly by Caroline Bowman and an RBI single from Micaela Neulight.

Chantilly scored its lone run in the fifth inning on an RBI single by Jessica Satterthwaite.

West Potomac is scheduled to face Madison in the region quarterfinals at 6:30 p.m. on Thursday, May 26 in Vienna. The Warhawks are 21-3 and lost in the Conference 6 championship game to McLean.