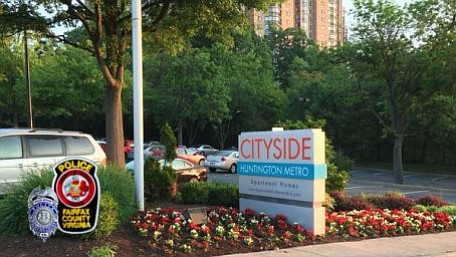 Early in the morning on May 20, police from the Mount Vernon Police District responded to a call about man who was shot in a parking lot in the 6000 block of Richmond Highway. Photo courtesy of Fairfax County Police

Tarreece John Sampson, 24, of Alexandria was found unresponsive around 2:20 a.m. the morning of May 20.

Police from the Mount Vernon Police District responded to a call about man who was shot in a parking lot in the 6000 block of Richmond Highway.

No further details from the investigation are being released at this time, Hawkins said.

Sampson was a Fairfax County Public Schools employee. He spent the last seven months working as a general education assistant at Fort Hunt Elementary School in the Mount Vernon area of Alexandria.

According to Principal Thomas Fitzpatrick, Sampson had entered a cohort to become a special education teacher and was applying for positions.

Fitzpatrick said they decided over the weekend to tell students about his death at their morning meeting when school resumed on Monday. They gave parents the choice to opt their student out but hardly any did.

For two days, students and teachers were able to take advantage of Fairfax County crisis support counselors at the school.

Fitzpatrick said even in the short time Sampson was at the school, he made a significant impact.

“He always tried to make connections with the kids,” Fitzpatrick said. “No matter how tough they were, or their behavior was. He had a natural sincerity, a gift actually, that melted away some of the kids’ rough exterior.”

Fitzpatrick also said Sampson, an African American, embraced the importance of being a role model for minorities in the school. “Many times when we can get young minority males into education, kids really gravitate towards them.”

As much for the young male students, Fitzpatrick said Sampson was also a positive influence for the girls.

“They see him, a responsible young man who’s trying to achieve something,” Fitzpatrick said, “teaching hold the door open. Girls see this is how people are supposed to treat each other.”

Next week, students will be writing memories of Sampson on paper basketballs — he could often be found playing hoops at school with students — and hanging them on trees that will be planted in his honor.

“He was just constantly telling the kids that the adults had high expectations for them and you can do it, meet those expectations,” Fitzpatrick said. “That advice is still there: His legacy is in all of our hearts and minds.”

Police are asking anyone who may have seen or heard something specifically between 1 a.m. and 3 a.m. in the area where Sampson was found to please contact Crime Solvers electronically by visiting www.fairfaxcrimesolvers.org, text-a-tip by texting “TIP187” plus the message to CRIMES(274637), by calling 1-866-411-TIPS(8477) or calling Fairfax County Police at 703-691-2131.