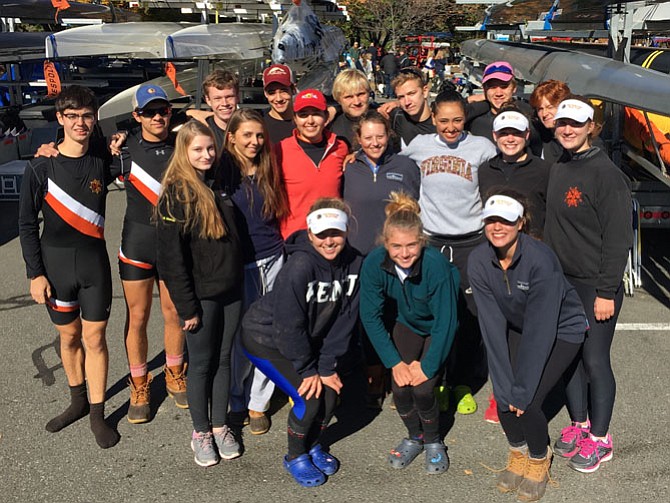 The First 8 Women's and Men's teams between their races on Oct. 23. Photo Contributed

In weather better suited for sailing than rowing, the Old Dominion Boat Club (ODBC) women’s and men’s crew teams competed with some of the world’s fastest boats on Oct. 22-23 at the 52nd annual Head of the Charles Regatta (HOCR) in Boston. This year’s event on the Charles River between Boston and Cambridge included over 2,250 boats from 820 schools and clubs.

The ODBC Women’s First 8 improved on its 2015 HOCR performance by placing 21st out of 85 highly competitive boats. Rowing against the current and with a strong breeze at almost 15 miles per hour in their face for much of the race, the ODBC Women finished the winding course with a time of 18:50.558.

T.C. Williams senior Katie Murphy summed up the battle against her competitors and the elements: "Though the racing conditions were less than ideal, we still rowed a very solid race. [ODBC coxswain] Camila [Cardwell] did a fantastic job navigating the course, especially for her first time at the Charles."

The ODBC Men’s First 8 faced even stronger gales when their race began almost three hours after the ODBC Women rowed. With winds at 25 miles per hour and stronger gusts, the men fell behind their normal robust pace in the first quarter of the race and finished with a time of 17:46.092, well behind their strong finishes in previous races this season.

ODBC rowers are on the road again next weekend at the Head of the Schuylkill Regatta in Philadelphia.