Living a Life in ‘A Delicate Balance’
Votes

Living a Life in ‘A Delicate Balance’ 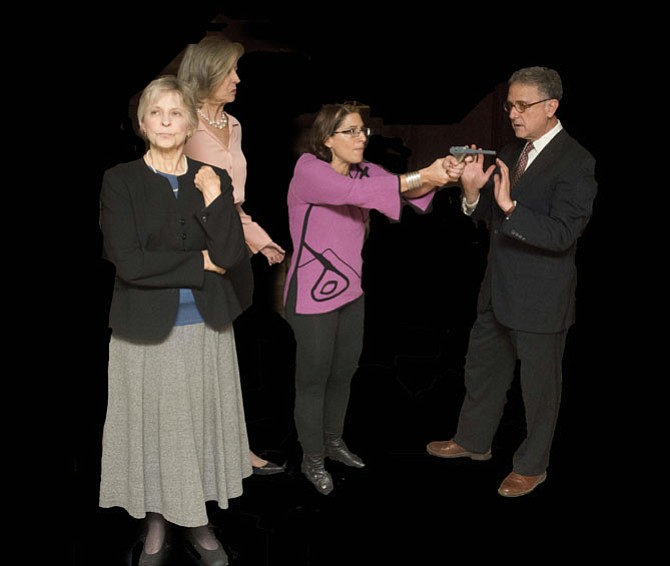 “A Delicate Balance” by Edward Albee is, as Director Laurie T. Freed says, a story of multiple themes: “man’s fear of taking risks in life; man’s inability to honestly communicate with family and friends; the loss of passion in one’s life; the fear of aging; the fear of the unknown. Albee believed that settling, risking nothing, maintaining a delicate balance in life was a life not lived to the fullest.”

The Peace Mountain Theatre Company will present Albee’s Pulitzer Prize-winning production at Congregation Har Shalom on Thursdays, Nov. 10 and 17 and Saturdays, Nov. 12 and 19 at 8 p.m. Sunday matinees followed by Q&A sessions with the actors and director are scheduled for Nov. 13 and 20 at 1 p.m.

“A Delicate Balance” opens when the lives of upper-middle-class suburbanites Agnes and Tobias and their permanent houseguest, Agnes' witty alcoholic sister Claire, are disrupted by the sudden appearance of lifelong family friends Harry and Edna, fellow empty nesters who ask to stay with them to escape an intangible terror. They soon are followed by Agnes and Tobias's bitter 36-year-old daughter Julia, who returns home following the collapse of her fourth marriage.

A team of 40 supports the performance.

Blum, who has appeared locally in many plays including “The Little Foxes,” “The Importance of Being Earnest,” “Humble Boy,” “The Comedy of Errors” and others said, “The character of Agnes is like many women who have sublimated their individuality to the goal of protecting their family. She is the old ‘ideal’ of the educated, refined wife/mother who keeps things running like clockwork for her husband and children, so they can grow and achieve, even if it is at her own expense. I like her intelligence, her devotion to her family and her steely resilience as she faces loss, betrayal, possible dementia and her growing acceptance of death. However, I dislike the way she has isolated herself and her husband from the world beyond their small social circle and her relative indifference to those outside her own family.”

Veteran actor Louis Pangaro enjoys playing characters who are caught in the struggle to hold things together. He’s performed as Macbeth, Othello, Lear and Shylock in Shakespearean performances and played Willie Loman and Eddie Carbone in Arthur Miller’s plays.

“Tobias has become accustomed to a life in some semblance of balance after a career in business.” Pangero said. “He prefers things to work smoothly like a machine in delicate balance, and he tries to distance himself from the unsettling emotions that arise in life. Who in our lives of pain and suffering does not hope for a moment of equilibrium? I admire and love Tobias’s struggle to do the right thing, for one last time in his life.”

“A Delicate Balance” premiered on Broadway in 1966. It is a cautionary tale that still resonates for today’s audiences. The exploration of choices — keeping life simple and in-balance versus risk-taking and adventuresome will make the audience examine their own life selections — and perhaps choose to explore some broader paths.

Director Freed said, “‘A Delicate Balance’ is an important play for audiences to see because it is an opportunity to experience one of the greatest master works of a world renowned playwright, Edward Albee. He is never afraid to use biting dialogue to wake up his audiences. All of his plays bring a dark humor and mystery to the characters that inhabit his stories. His dialogue reminds one of classical music; he even mentioned that his plays were ‘composed’ rather than written.”

General admission tickets are $20 for adults and $10 for students (student ID required at the door. Gold and Silver sponsor tickets are also available for $75 and $36 each. Group tickets (minimum quantity of 10) are $15. Because of content, this show is not recommended for children under age 13. Tickets are available through www.tinyurl.com/A DelicateBalance or by calling 301-299-7087. Tickets will also be available at the door.