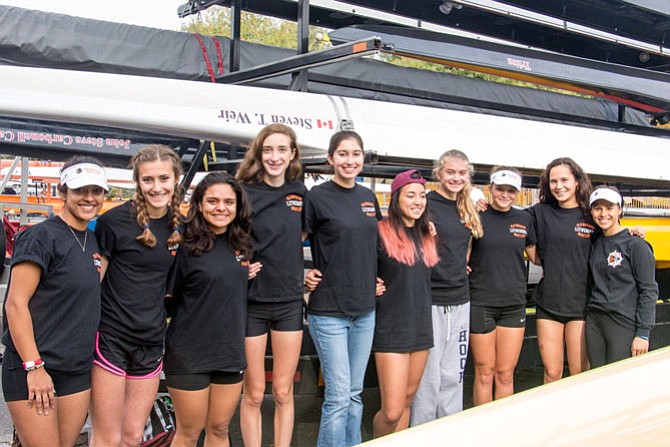 Lightweight Women's 8 and their coach at the head of the Hooch in Chattanooga. Photo Contributed

ODBC rowers took 17 boats to the water in two separate regattas to finish the fall rowing season on Nov. 5-6, capturing 6 medals and strong performances by a number of boats. The ODBC Men’s and Women’s Second 8s and Lightweight boats competed at the Head of the Hooch Regatta in Chattanooga, Tenn., while the First 8s, a number of 4-seats, lower boats, and singles competed locally at the Head of the Occoquan (HOTO) Regatta.

Billing itself as the “Last of the Great Fall Regattas,” the Hooch included more than 200 boats in the two-day event. With warm weather at both venues, racing on Saturday, Nov. 5, began with ODBC Second 8 Men and Women competing against dozens on First 8 boats from top schools and clubs from around the country and overseas. First up for ODBC, the Women’s 2V rowed the 5000 meter course with a time of 18:20.2, finishing 24th out of 73 boats. The Men’s 2V also rowed a strong race against a competitive 62-boat field, finishing 32nd with a time of 16:52.3.

On the same day but 600 miles from the Hooch, three women from the ODBC First 8 spent part of their Saturday racing in single boats on the 5000 meter course at the HOTO Regatta to “warm up” for their 1V race the following day. T.C. Williams seniors Reed Kenny and Katy Murphy earned the silver and bronze medals, respectively, with times of 23:22.95 and 23:45:06. T.C. sophomore Blythe Markel placed 7th with a time of 24:16.53.

Early the next morning in Chattanooga, the ODBC Men’s and Women’s Lightweight 8s hit the water. The Men’s Lights raced first, placing 12th out of 22 boats with a time of 16:41.8. Next, the Women’s Light 8s blazed down the course and scored the silver medal in their 20-boat race with a time of 17:31.6, a little more than 3 seconds after first place Cincinnati Jr. Rowing club and 8 seconds ahead of 3rd place Detroit Boat Club. The ODBC Women’s Lightweight 8s include rowers Charlotte Carey, Lauren Kelly, Alyish Motsinger, Emily DeBodene, Astrid Henkle, Cecilia Fernandez, Chloe Marsh, and Anissa Ashraf, and coxswain Paula Filios.

Later on Sunday morning at the HOTO, the ODBC Men’s First and Third 8s started the day racing in the Men’s Youth 8 Upper Boat category with 27 other boats. The First 8 placed 4th with a time of 16:41.51.

ODBC entered two boats in the 31-boat Men’s Youth 4 (with cox) Upper Boat Category, and finished the day with two boats in the 9-boat Women’s 4X (no cox) category. In the latter race, the ODBC Women’s First 4 won the silver medal with a time of 21:27.25, 5 seconds behind first place Prince William and over 19 seconds ahead of Steel City Rowing Club. Members of the ODBC Women’s First 4 include Sarah Vest, Tess Moran, Anna Jane Guynn, and Ella Benbow.