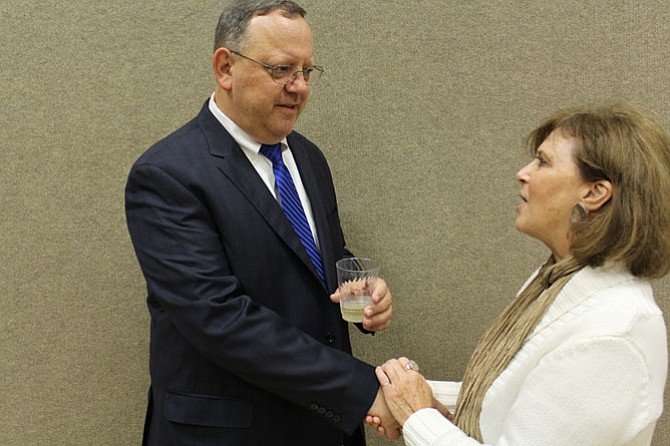 McLean Citizens Association Board Member Bonnie Heebner, who represents Madison of McLean, congratulates Mark Zetts on his resolution. “He was very informative, knowledgeable. I learned a lot from him,” she says of Zetts. Photo by Fallon Forbush.

McLean — Sitting in the back of a meeting room in the McLean Community Center, Mark Zetts squirms in his chair as he listens to a room full of his peers speaking his praises.

Zetts is a humble man who says he prefers not to talk about himself. But on the evening of Nov. 2, he was the center of attention.

The McLean Citizens Association voted unanimously to approve a resolution expressing its “deep gratitude and appreciation” for his “exceptional dedication and selfless devotion” to MCA and the McLean community.

While Zetts was a member of the MCA’s Board of Directors since 2002, he spent more than nine years as chair or co-chair of the association’s Planning and Zoning Committee during a time when the Fairfax County Board of Supervisors began replanning the Tysons Corner Urban Center and adopted the Tysons Comprehensive Plan, which would guide the development.

MCA was a highly engaged stakeholder as the county made decisions about how McLean would grow around its new metro stations on the Washington Metro Transit Authority’s Silver Line. This required Zetts to attend many meetings so that MCA and the 30,000 households it represents would be heard throughout the development process,” says Zetts.

ZETTS was also providing public testimony on behalf of the MCA to the Board of Supervisors and its Planning Commission up until he left the association in order to focus on his family and career as a senior software engineer for IBM.

“He authored over 100 resolutions during his time and had immense credibility, not only with the commission, but the county,” says Jeff Barnett, president of the MCA. “We put together multiple people to fill his shoes,” he says.

Zetts is not a braggart man.

“Anyone can do it,” he says of his time testifying before public bodies.

But his replacements on MCA’s Planning and Zoning Committee, Co-Chairs John Schaefer and Ron Bleeker, were not so modest.

“He’s set a standard that can’t be duplicated; can’t be met,” says Schaefer.

Still, the new co-chairs will have plenty of opportunities to build their own legacies because the MCA will be having many more discussions on land-use and zoning ordinances.

Since Fairfax County approved original plans for Tysons in June 2010, they have been amended and the county’s Planning Commission has scheduled public hearings for next year.

Zetts is confident that MCA will continue to have impact on the decisions that are being made.

“It’s not just me,” says Zetts. “It’s always a group effort. The [MCA’s Planning and Zoning] committee is full of a lot of experience.”

Though the MCA is limited in power, its carries the weight of more than 100 years of influence as an organization of concerned citizens.

“We feel like we operate a bit like a town council,” says Glenn Harris, MCA’s first vice president. “We have no legislative powers and we’re not a creature of the state, but we examine issues important to residents.”

Though the council does not mandate it sends a signal to the county’s public officials.

“Here are a group of citizens who have thoughtfully looked at an issue and are suggesting changes to make it better,” says Harris. “Sometimes they listen.”

ANY TIME THE COUNTY requires a public hearing for approval of something in McLean, officials present MCA with their ideas first, says Zetts. “Sometimes they come back and present two or three times based on MCA’s input,” he says.

For instance, the MCA’s board convened several times to deliberate the county’s Meal Tax Referendum that was on the Nov. 8 election ballot. The final vote of the board was to support the tax.

“It’s a conditional approval and it was not a unanimous decision of the board,” says Harris. “We expect the county to make good on its intention to reduce the burden on property taxes.”

Should the referendum succeed, the Board of Supervisors will dedicate the net revenues to two purposes: 70 percent to Fairfax County Public Schools and 30 percent to county services, capital improvements and property tax relief.

As part of the MCA’s support of the referendum, Harris said it will also be pushing the county to address pension issues, which he said are a primary cause of increasing real-estate taxes.

“People in McLean care,” Zetts said during his speech while accepting a framed copy of the resolution in his honor. “They always have, they always will.”

If the county releases planning documents that make your “blood boil, MCA is on it,” he finished.